Venini: “Any band with a bit of style and confidence just gets slagged off” – Interview 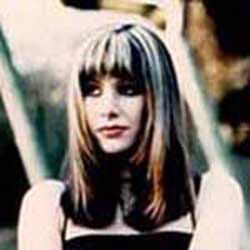 Debbie Lime points an accusing finger at the glass of lager on the table before her and regards it with a frown. Her protestations are directed at Nick Eastwood; Venini‘s bassist is seemingly the waiter for our table this evening.

We’re in a hotel in London. Three of four regular Venini people are here, with drummer Robert Barton missing. Nick assures that this is a good thing: “I’ve had two conversations with him. He’s scary – he looks like he’s planning some sort of murder.” Debbie agrees. “He doesn’t talk. He just goes into a corner and sits there,” she muses, “but the drummer in my last band used to get drunk and fall off the stool…”

Across the table, pint in hand (sans lime), sits Russell Senior, explaining between sips why he left a group called Pulp and ended up in a band called Venini.

He’s keen to deny some accusations, such as the idea that he left Jarvis Cocker et al to concentrate on his antique glass collection or wanted to stop music to spend more time with his family. Looking rather normal about the eyes for a man with a formidable reputation for staring, Russell decides the time to come clean is now.

“I was giving ‘no comment’ to everything so some people made statements for me and some of those were a bit erroneous. I left Pulp because I didn’t want to be in it anymore and I didn’t think what we were doing was as good as what we had been doing. It was just not a nice place to be. We’d had our best time and there was no point sticking around,” he reasons in a broad Yorkshire accent, while his lead singer peers over his head at ‘Emmerdale’. “My own preference would be that Pulp would not be mentioned on the Venini web site whatsoever, but I realise that can’t be the case.”

Nevertheless, Russell was part of Pulp for over a decade. Is it healthy to disenfranchise one’s self from one’s artistic past so completely?

“I was very proud of being in Pulp. I thought it was the best band in the world when I was in it, but I want to be able to move on from it at some point.”

Debbie: “Russell makes us carry all the luggage.”
musicOMH: “Including your inflatables?”
Debbie: “Well, Nick carries those, but we can’t talk about that…”

Now seems like a good point, as Nick returns from the bar with more drinks. Venini was formed, as legend has it, when Debbie sent Russell a demo tape and he wanted to put music to her songs. Mon Camion was born. Russell auditioned some band members with questions like “Do you like The Seahorses?” (Nick was signed when he denied such affections) and, then a five-piece, they began to rehearse. Soon it was time to go gigging, but the band were keen to stay out of the limelight (boom boom… ) until they found their identity. Their first gigs as Venini were so low-key that they weren’t even announced. Debbie recalls their first gig, supporting Rialto at a Warwick University Freshers’ Ball.

“It was really amazing; a lot of people were getting into it,” she enthuses, before Nick picks up the story, “We had a drum machine and Charlie (Collins, occasional Veninian, bald on top, very long beard) had to switch it on. We were really worried he was gonna put Bossanova on for Mon Camion or something, and just stop and go ‘Oh fuck!’… he comes in and does sax and wind stuff and is an evil Father Christmas…”

Since those early days Venini has been building something of a following, catching attention with whatever they do, their image clearly stating that they should not be ignored. A recent fan mailing included a piece of red vinyl, instructions on how to make it into a pen holder (“if they’d made it they’d see it wasn’t just a pen holder…” – Nick) and a top 10 poll of favourite fruits (bizarrely, limes were not included). The idea was to get fans to send in the names of their favourite fruits, in keeping with the double-entendre of fruitiness surrounding the band. Russell was taken aback by the favourite fruits of some people. “Somebody suggested Graham Norton,” he recalls. Nick remembers Dale Winton being nominated by several people.

Venini have played a great many gigs already, and for Russell that’s what it’s all about. He enjoys the performance of a gig, and it is this philosophy that ensures Venini’s need of an image. They have ambitions yet, Debbie testifying that she’d be delighted to share a bill with Slade and The Divine Comedy. But it would be fair to say that not all the music press about Venini has been positive. It is not surprising to discover that Venini feel somewhat aggrieved by what they feel amounts to character assassination.

“They slagged us off for being unoriginal but they had Oasis on the front cover that week,” she reasons. “We’ve had some good press but it’s not been from the ‘inkies’ and it was never gonna be,” states Russell, matter-of-factly. “They’re not going to get it and they’re gonna make a point of not getting it; but we were just taken aback by the virulent shit that was slung in our direction – it became really personal. The media have this idea of who’s gonna be the best fucking band and they just ram it down people’s throats, but I’ve had this before with Pulp. They trivialised us, marginalised us, mocked us for about five years. What changed it was us selling hundreds of thousands of records. The media don’t champion new people unless they know they’re not gonna get anywhere.”

Russell: “Any band with a bit of style and confidence just gets slagged off.”

One of the criticisms levelled at Venini was their allegedly inept lyrics. Are they harmless fun, a welcome departure from the moaning-over-unrequited-love guitar-band formula (Debbie calls this Stereophonics) that is still prevalent on the indie scene, or not serious enough to be worthy of ‘inkie’ accolade? Debbie defends her songs. “Some of them are quite comical – Un Shaker, Mon Camion – but there is a seedy undercurrent to them. Carnival Star was something I dreamt up; something I’m searching for. A French dwarf.” Russell wants to claim responsibility for ‘St Tropez’, during which the frightfully serious couplet appears; “and he said dancez-vous/and I said askez-vous”. Serious indeed. But Russell claims to have altered Debbie’s original lyrics for other reasons too. The original lyrics for Photograph were rather more risque than the finished version; in deadpan Yorkshire, Russell recites them. “I want to get my zoom lens out and shoot all over you!” Nick has a lyrical anecdote of his own; “Amsterdam Sam was all about this dwarf that got tied up in barbed wire…” Debbie is seen to feign embarrassment at this point, but makes no apologies.

On being asked about the use of the French language in debut single Mon Camion, Debbie dismisses her French skills and claims that the song is merely “an attempt to cop off with French men. I’ve got a bit of a French men thing.” Nick decides at this point to stand up for sexual equality. “What about French women? You’re bi-curious, aren’t yer?”

Debbie Lime: “‘Carnival Star’ was something I dreamt up; something I’m searching for. A French dwarf.”

“So what’s up wi’ French women then? Is it coz they’re a bit hairy?” persists the bassist-cum-waiter.

“No, no,” insists Debbie, “I like French men. I like English women.” Seemingly having settled Nick’s imagination momentarily, Debbie goes on to lament Venini’s live audiences. “No French men come to our gigs. Put an advert on the website – ‘WANTED: French men’.”

No problems there… grasping at straws I scan down my notes for an appropriate question with which to change the subject and settled on something entirely different. Venini’s image of sexual ambiguity. Debbie smiles at Nick while Russell reclines.

Debbie Lime on her audition for Venini: “I was too busy lapdancing at the time”

“I guess that’s us then,” Debbie ventures, offering the question to Nick. He minces no words.

“We’re all bi,” announces Nick to the dictophone and the bar in general. There is a pause. Russell leans forward.

“I didn’t know this,” he says. “I didn’t know what these people were like. If I’d known their musical tastes, their dress sense or their sexual preferences I wouldn’t have got into a band with them.” His discourse over, Russell Senior falls back to his reclining position.

But Russell auditioned them… what was Debbie’s trial like? “I can’t really remember,” she frowns, “I was too busy lapdancing at the time…”

Seriously now, this image thing could go a bit too far. Venini are a band, and it should be their music that we discuss. I look at my notes again and realise that one vital musical question hadn’t thus far been asked. I took a deep breath, turned to Debbie, and offered up the query.

The tape runs out, the drink doesn’t immediately follow suit, but eventually it was time to hit the road. I left with a profound sense of warmth from this band who, despite their image, are not at all the scary people they’re made out to be. Even Russell wasn’t scary; why, he hadn’t stared psychopathically as much as once.

“What, like THIS?” he asks, whites around the edges of his eyes showing.