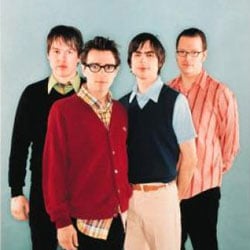 Weezer, it seems, are rock’s very own boomerang.

Only if you believe certain sections of the music press, that is, who tend to split them up approximately half way between albums, only for them to reunite soon after for another instalment of self conscious rock and songwriting.

This is where we find them on the occasion of a rare chat with a member of the band, in this case guitarist Brian Bell, who is proving to be a relaxed and amiable interviewee on the phone from record company HQ in Los Angeles.
I begin by offering some thoughts that the Red Album, so called, finds them on strong form – and wouldn’t you know it? He agrees. Kind of. “Yeah. Er, we’d like to think so! For us this album was very much a ‘getting the nose back to the grindstone’ ethic. Everybody in the band contributed, which is how we wanted to accomplish it, and the recording took place in three segments.”

He continues. “The first session was with Rick (Rubin), then the second with just the band ourselves, and then third with Jack Knife Lee producing. Throughout the recording stages we evaluated where the album was at and where it was headed, which was a real luxury for us over a nine month period of time. We really went into the studio without any rehearsal, after Scott, Pat, Rivers and I played through the songs twice round at Rivers’ house! I think it was best that way, as sometimes you don’t know what things need and a professional engineer can help you put them in place.”

As Bell indicates, this was the first album where the songwriting credits were opened up to the band. “It was before we even started recording. We said “what goals do you want to achieve on this album?” I had the confidence to say I want one of my songs to be on a Weezer album and to have you play it. And so we did Thought I Knew.”

“I had the confidence to say I want one of my songs to be on a Weezer album and to have you play it” – Brian Bell on a newly democratic Weezer.

Also making its mark on the album is The Greatest Man That Ever Lived, a radical fusion of styles and the longest song the band has yet performed. Clearly Bell holds affection for it. “It’s almost every style that there is, including the Andrews Sisters and a Bach chorale, thrown in a blender with Jeff Buckley! For this one I think we drew on every single influence, just as long as it rhymed! It was extremely challenging to record.”

The song brought through an aspect of the band close to Brian’s heart. “What always excited me was our attention to vocal harmonies. We sort of lost that with Pinkerton, and then we got it back a bit with the Green album, which was all about the blending of voices naturally, as if in an auditorium. A problem that we’ve had before is that everyone has to pronounce their words the same way. I’m from Tennessee, but Rivers is from Connecticut. So we pronounce differently a word like ‘her’, sometimes it was more like ‘here’, and we’d have to be careful with that”.

Along with the single Pork And Beans is Heart Songs, which name checks a handful of diverse bands. Which begs the question – which compositions would Bell regard as his Heart Songs? He chuckles a little in a resigned fashion, dangled an obvious carrot. “Darn it – what are my heart songs? I’m going to take that question literally, I think. I’m a huge fan of Bob Dylan, The Beatles, John Lennon, and then there are songs from my dad’s record collection like Fleetwood Mac, Eric Clapton – I love his guitar playing. As a teenager I got into Led Zeppelin, Metallica, Slayer – the usual stuff. Iron Maiden was one of the first gigs I saw, in Knoxville Tennessee. And then without even knowing it a country influence seeped its way into my sound, a lot of Hank Williams and Patsy Cline.

I ask Bell for his take on the reappearance of stories the band are planning to split. Expecting a slightly awkward silence, I am pleasantly taken aback to hear him laugh. “That stuff, it’s what people want to hear – who’s sleeping with whom; somebody’s life is more messed up than mine. I hate to use the word but it’s white trash really. The truth is it’s hard to keep bands together, because keeping four people on the same page is difficult. I think a part of our longevity is keeping people apart for a period of time, as it then works when we come back together. But we all love this too much to walk away from it.”

“The truth is it’s hard to keep bands together, because keeping four people on the same page is difficult” – Brian Bell confirming that while Weezer will stay together, they’re human like the rest of us.

So that’s it – no plans to part for now. But Bell goes further. “I would definitely say we won’t ever. It’s still somewhat dysfunctional, but when we get in a room together and start singing something happens. We’re talking about doing a proper tour in the fall, and a five city American tour, like a sort of Hootenanny. Actually, we’re rehearsing in my house in 20 minutes’ time.

He pauses, excusing himself for a moment, and then returns to the phone. “That was our bass player; they’re paving the streets of my neighbourhood today, so it’s going to be tricky getting back there.”

He finds his place again, as it were. “We’ll be on to the next album soon with Jack Knife Lee as a producer again. If all things go to plan we’ll also make it to England, Australia, Japan, Brazil…this is all in our perfect world of course!”

Also in a perfect world, Bell will continue to contribute songs to the band, alongside his own solo work. “I recorded my own record and I hope that gets heard, and as a band we’ve been working on hundreds of songs. Part of Rivers’ demo release was that we wouldn’t necessarily want to record those songs in the Weezer way.”

I can’t let him go without discussing a rather impressive facial growth, sported on the album cover. “The record cover we took completely differently from each other, we didn’t know it was going to be the album cover. With my beard, though, I kind of go on a six week plan. I let it grow three to four weeks sometimes, and then shave it off completely. It’s about the only thing a guy can do! I’m a brand new boy at the moment; I’ve just had it done again.”

Does he think the band still look the part though? “Yeah,” he says emphatically…and then laughs. “I hope so. It’s really hard to capture the youth of rock as a musician – it’s hard to keep that as you grow older, and you’re saying things like, “I think I like salted jazz now!” Keeping something fresh for the kids is not the easiest thing for sure, but I think we’ve just about managed to do it.”

Talk also turns to an unexpected sideline of Brian’s, the movie Factory Girl, in which he played Lou Reed, with Pat Wilson as John Cale. Is he likely to revisit the experience? “Only if it fits” he laughs. “With an offer like that, if it’s easy and fun we really couldn’t refuse it. Mind you, the reason Pat and I did that was because we thought it would be cool to do Heroine – but they didn’t use it in the movie! It was great though.”

With a cheery farewell, Bell is gone and off to navigate the roadworks on his way to rehearsal. In the course of our interview the intimation is that Weezer are as content with themselves as they’ve ever been – and that the band are entering a new phase of productivity.