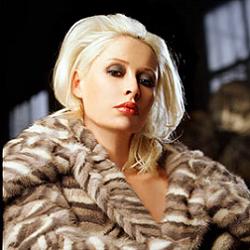 What happens when you interview the object of your most major teenage crush and performer at the first gig you ever went to? You spend an hour chatting and they show you what’s on their iPod, that’s what – as we found out in the company of former Transvision Vamp frontwoman, Wendy James…

My wife and I don’t have secrets. At least we don’t any more after I came clean about the extent of my fixation with Wendy James when I was, ooh, 14 years old.
“Should I be worried?” she asked me when I was in the throes of setting up the interview. “It’s fine. It’s work,” I assured her.

Thankfully, it is fine. I’ve grown up and, judging by the refined, exclusively Marc Jacobs-clad and well-spoken lady who greets me in a swanky West London bar, so has Wendy James.

We share first gig experiences – her’s The Clash at the Top Rank in Brighton and mine, Transvision Vamp at the Royal Court Theatre in Liverpool. She seems incredulous:

“You’re kidding. Really? Was it a good show?”

There is a hint of insecurity in her question and somehow it does not square with the motormouth pop-punk princess that the British press portrayed and crucified in 1991. Given the media’s hatred of her back then, I wonder if she is reluctant to speak to them again as she promotes her new project, Racine:

“No, no. Firstly, I have a very short anger span. I also forget any bad things. My body is like a lightning rod for negativity – it diffuses it instantly. So even if on these new press outings I was sat face-to-face with some of the people who had really ripped into me, I wouldn’t know because I wouldn’t compute that that was who they were!”

“Even if on these new press outings I was sat face-to-face with some of the people who had really ripped into me, I wouldn’t know because I wouldn’t compute that that was who they were!”
– Wendy James on how she’s forgotten those who savaged her in the press.

Transvision Vamp imploded in a blaze of media antipathy and public apathy at the end of 1991. In 1993, Wendy released an overlooked solo album of songs penned by one Elvis Costello, before seemingly disappearing off the face of the earth for 10 years.

In reality she was in London’s Ladbroke Grove learning all the tools required to become a self-sufficient musician. In 2003 she moved to New York and her reason for leaving London illustrates that her rebellious streak (by “conventional” wisdom’s standards) has not left her:

“There was a point in Ladbroke Grove where I knew lots of people who’d had run-ins with fame and showbiz in many different forms but they were reaching a point where they were settling down. They’d maybe been wild 10 years ago but now they were getting a bit more… If you don’t watch out you get sucked into being ‘mortgaged for life’. My radar, my antennae just aren’t up for that kind of thing. The people I’ve met in New York are more people in my mindset – they don’t want to settle down.”

It is not just the people in New York that have kept her there:

“That would really get Piers Morgan wouldn’t it? I could still win an Oscar but it would have to be for music. Very good! Okay, game on!”
– Well, not quite everyone…

And “work” she most definitely has been doing. Get hold of a copy of Racine’s debut album Number One and you’ll find that it all of its songs were “written, played, arranged, produced & mixed by Wendy James”. It’s even on her own record label. Why did she not just call the project “Wendy James”?

“‘Racine live at The Roxy’ sounds much better than ‘Wendy James live at The Roxy’! I don’t want to be confused for one second with a female singer/songwriter… I’m just a band kind of girl!”

Wendy once said that singing other people’s songs (in Transvision Vamp, guitarist Nick Sayer was the principal writer) is a bit like “acting”. Given that she once also made an infamous bet with journalists that she would win an Academy Award, one might have expected her to become a thespian.

She laughs and then I can almost see the light-bulb flash above her head:

“Unless it was for Best Music! That would really get Piers Morgan wouldn’t it? I could still win an Oscar but it would have to be for music. Very good! Okay, game on!”

She laughs. A lot. And it occurs to me that name-checking the former Sun pop correspondent and Mirror editor indicates that Ms James’ “lightning rod for negativity” has not had a 100% hit rate. Still, has she really not thought of treading the boards?

“I’ve dabbled with the notion. I put my foot into drama school… but very quickly it became obvious to me that that was not the life for me. And really that consolidated the fact that it’s music or nothing. There is no other option. Time spent on anything else could be time spent on music. It’s my life. It’s my passion. It’s my sustenance. It’s everything.”

“If you don’t watch out you get sucked into being ‘mortgaged for life’. My radar, my antennae just aren’t up for that kind of thing.”
– Wendy James on fleeing middle-aged hell.

Since she is so fervent in her love of music, I wonder which artists float her boat. Her instantaneous answer surprises me.

“Jay-Z! Jay-Z’s top of my list. It’s all hip-hop apart from The Rolling Stones and Bob Dylan – that’s all you’ll find on my iPod. Do you want to see my iPod?”

Once upon a time such an offer would have gotten a young lad over-excited. For now, it’s still an offer that can’t be refused. And she’s right. Apart from Jagger and his crinkly, tax-avoiding cohorts, and Mr Zimmerman, there really is nothing on Wendy James’ iPod except the likes of Jay-Z, Snoop Dogg, Eminem, Wu-Tang Clan, Nas, Public Enemy and Dr Dr.

At this point I’m curious. Although some things about Wendy James may have changed over the years, I don’t get the impression that being a bolshie, independent woman is one of them. So is she not bothered by her favourite musical genre’s frequent misogyny (“I’m a pimp in every sense of the word, bitch” and “I got 99 problems but a bitch ain’t one” being two of Jay-Z’s politest lyrics, for example)?

“As a listener it doesn’t concern me but if I was doing a record in collaboration with one of them and they brought in some lyrics that was all about ‘bawling bitches’ I’m not sure I’d be able to let that one go on my work. I don’t know if on my work I could ultimately condone it… And 50 Cent – I really want to like him because the music is so amazing but the lyrics are fairly base. So, as a listener the ‘bitch’ and the ‘ho’ go by me and I’m just thinking ‘what a f**king awesome sound.’ ”

Does that mean that lyrics are less important than the music?

“That’s definitely the wrong impression. I’m just saying ‘bitches’ and ‘ho’ don’t bother me that much. I relate more to a Jay-Z lyric about ‘don’t f**k with me; I came up by myself; I pulled myself up; you don’t like me – doesn’t bother me’ than I would some f**king singer/songwriter going on about heartbreak!”

“I relate more to a Jay-Z lyric about ‘don’t f**k with me; I came up by myself; I pulled myself up; you don’t like me – doesn’t bother me’ than I would some f**king singer/songwriter going on about heartbreak!”
– Wendy James probably isn’t a James Blunt fan.

Nevertheless, she takes an altogether subtler approach when coming up with her own lyrics. In fact, for the next 15 minutes we dissect her songs and it turns out that most are miniature stories.

Whilst Racine Number One’s The Man is “ethereal” and Greasemonkey is simply “about lust”, Princess Patience Blues is about “the first West Indian families who moved to Ladbroke Grove after the Second World War”; a real-life shebeen in Ladbroke Grove called Princess Patience Blues that they started “because if you were a black person you couldn’t go into a white man’s pub and get a beer at the end of the day”; and a fictional character named Patience who is “one of the porters in a hospital and is just struggling to keep food on the table”.

Blonde Mink Mimi is even more adventurous. “An ode to Damon Runyon“, it features a character called Whispering Boy Clyde who could have come from one of the Guys And Dolls’ author’s stories, while “his moll is Blonde Mink Mimi”, named after the Mimi from La Boheme, which Wendy sung in as a child. This may well be more imaginative than “I don’t want your money honey, I want your love”, but if you’re thinking that it’s escapist drivel then think again:

“All of my personal emotions naturally come through the characters I’m writing because they’re doing things from my point of view. Blonde Mink Mimi… She’s a tramp with a heart of gold!”

She laughs. A lot. Again. Before adding:

“Oh my, I have such fun! You’re going into the inner workings of my mind! What I’m trying to say is that all the songs – although they’re stories – they’re invested with real Wendy opinions but they are through my characters rather than me singing: ‘When I was 13, I had such trouble.’ I don’t think you’re ever going to get sentimental tosh [out of me].”

Somehow I think she’s right. And with that our time is up. In fact, it should have been up half an hour earlier. I wish her all the best with winning the Oscar, thinking that if it doesn’t happen for acting or for music, she may just have a shot at getting one for scriptwriting. Now that REALLY would get Piers Morgan…