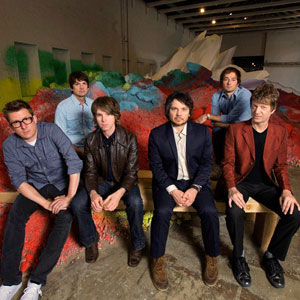 Jeff Tweedy has been round the block in the last two decades after founding the highly influential country ensemble Uncle Tupelo in the late ’80s.

After their demise he formed Wilco, initially a totem of alt-country before 2001’s Yankee Hotel Foxtrot and last year’s A Ghost Is Born moved his band onto an altogether more challenging plain. Throw in his depression, anxiety and an addiction to painkillers and you have quite a rock ‘n’ roll story.

I was given a mere two hours’ notice that an interview with Jeff Tweedy was up for grabs. After giving the obvious ‘yes please’, I embarked on a frantic dash across London to get to Shepherd’s Bush on time. I composed my questions on the tube. The whole exercise was a bloody struggle.

What is more, I was slightly concerned that Tweedy may be in person a rather grumpy sort? I’d heard reports that he’d been especially rude to British audiences in the past whilst on stage.

I could not have been more wrong. From the moment I shook his hand, it was clear that here was a shy, reflective, intelligent gentleman who exercised admirable patience at my bedraggled state. He also happens to have made some sublime music in recent years, and was now in London preparing for a solo acoustic show at Shepherd’s Bush Empire.

Wilco were formed after the break-up of Uncle Tupelo, pioneers of that confounded term ‘alt-country’, in 1993. Tweedy had formed the latter band with schoolmate Jay Farrar in the eighties, with their finest moment coming with the Peter Buck-produced March 16-20 (1992).

“The label of ‘American Radiohead‘ is critical shorthand for ‘I don’t know what to tell you its like, but trust me you’ll like it’.” – Jeff Tweedy

Wilco took up musically where Uncle Tupelo left off until 2001’s Yankee Hotel Foxtrot, which incorporating an array of distorted and innovative instrumentation and lyrical themes of disillusion and loneliness, made an indelible mark on music. This was matched by last year’s overwhelming A Ghost Is Born, a record so sonically untamed in places as to lead critics to proclaim that Wilco were the ‘American Radiohead‘.

Tweedy does not like this: “The label of ‘American Radiohead’ is critical shorthand for ‘I don’t know what to tell you its like, but trust me you’ll like it'”. Here is instanced Tweedy’s disdain for the British music press. He hasn’t made it easy to like him on these shores, turning cranky at concerts and often chastising our, ahem, hallowed fourth estate.

“At one point there was a taste-making press here,” he said. “I don’t notice that anymore. Now it’s just lazy journalists writing for people who are lazy about reading. There’s a lot of shit out there to sort through – that’s what a lot of people are looking to journalists to do for them, sort through all the shit”.

“Have some guys never heard a record from the ’70s? There was a time when music was expansive, it was representational art.” – Jeff Tweedy

He admits to a chequered history with UK audiences but says he is ‘prepared to meet them half way’, whatever that means. Suddenly I feel lucky he’s come over to London at all.

Moving away from this troublesome realm of discussion, I asked him about how he feels about playing on his own without the support of the other five Wilco members.

“Its like a paid vacation, though I don’t mean to make Wilco sound like work.” He said. “This is definitely more intense. The shows are scary but at the same time kinda relaxing – I don’t have a set list to stick to”.

There have been many occasions in the past where Tweedy has found it scary to take to the stage, even with his band. He suffered for some years with panic disorder. From this came a deep anxiety about going on stage.

“One reason music exists is that you can’t say everything.” – Jeff Tweedy

“I have a panic disorder, and I’ve panicked before I’ve gone on stage before. The backstage area became a trigger for panicking. But I always actually felt that once I’d got to the stage it would be ok. It’s not an issue anymore. I’m much more stable than I’ve ever been.”

And he looks in fine health too. Last year Tweedy checked into rehab to treat an addiction to painkillers that were designed to ease migraines. It has been said in many critical quarters that this time greatly influenced the slightly unhinged tone of Yankee Hotel Foxtrot and A Ghost Is Born. Tweedy, though, contends the latter isn’t so out-there as all that, crying “have some guys never heard a record from the ’70s? There was a time when music was expansive, it was representational art”.

As well as his solo gig, Tweedy is also promoting the release of Kicking Television, a live album recorded by Wilco in Chicago earlier this year. On that tour, he and his band were faced with the awkward transition of their layered, immaculate studio sound to the live arena.

“I wouldn’t say that’s been easy, but it’s been really pleasurable. I feel relaxed playing a lot of those songs live whereas in the studio there was an intensity that was uncomfortable, with trying to get that perfect take. Something like Muzzle of Bees felt so orchestrated and fragile, now it feels like a sturdy, barroom song. I prefer to be visceral rather than cerebral on stage.”

When asked fairly specific questions, Tweedy often goes off on tangents reflecting on his own philosophy of music and of Wilco. These are welcome interludes. He says: “One reason music exists is that you can’t say everything. If you could say a melody you would say a melody, but you can’t so you have to perform it on a musical instrument”. A beautifully simple perspective, if ever there was one.

“I prefer to be visceral rather than cerebral on stage.” – Jeff Tweedy

He also loves the companionship he gets from his band, especially after his spell in hospital: “it’s a magical feeling and a real warm camaraderie, while understanding it won’t last forever”. He adds that the current line-up is the best ever.

The overwhelming impression of A Ghost Is Born is that it sounded like a vision realised. So what direction Wilco will take next must be an intriguing question for the many loyal fans of this great American band.

“Recordings we’ve done so far have been weirdly and oddly normal. There’s something super straightforward about the songs we’ve been working on. It feels really weird to us”.

So Wilco not being weird is weird. Tweedy reassures me that this will not lead to a ‘back-to-basics’ record. Lyrically, however, new songs have a distinct narrative style – they are story songs rather than the often surreal poetic abstractions of their last two albums.

This is the first of two days of interviews for the poor guy, but as we part company he has the graciousness to see me out of the hotel room and wish me luck in the future. But despite his amenability and articulacy, it is clear that what he really wants to communicate is not expressible in words, but in a melody that you can never say, as he himself so eloquently put it.

Wilco’s A Ghost Is Born is out now though Nonesuch. Tour dates and further information can be found here.