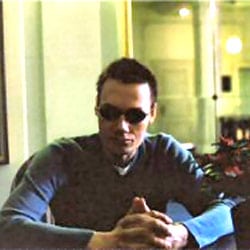 William Orbit’s musical CV is a sizeable one. Not content with Strange Cargo and some pioneering work with electronic ambience in the 1980s, he has come of age handsomely through his production work.

He is credited with a large part in Madonna‘s Ray Of Light reinvention, and following that up with Blur‘s 13.

His solo work has taken a back seat this decade save for Pieces In A Modern Style, a 2000 reinterpretation of classical pieces that ruffled a few feathers but soothed others. This year, that all changes, with two new artist albums – Hello Waveforms and Cellcloud.

Having arrived in th ewarmth of Orbit’s West End hotel room from the wintrycold, sitting opposite is a relaxed, genial man with a creative glint in his eye.

Orbit’s base is not far from London’s hub, but he was born in the East. “I grew up in Shoreditch and Hackney, where we moved. My parents were both teachers, and we gradually migrated north, moving up to Palmers Green. I left home at 16, so found my way quite young, and since then I’ve lived mostly in America and London. I find home is where the laptop is these days!”

Orbit, real name William Wainwright, grew up with classical music “a lot. That was all we heard at home, as my parents were quite at odds with pop music. Whenthey listened to classical, pieces like Mozart‘s Eine Kleine Nachtmusik made them happy. I didn’t have a musical education, but did listen to music a lot. It’s still not an easy topic, music, and my parents are still purist about it, but I find in terms of style I’m moving towards them rather than them moving towards me.”

So when Orbit wrote Pieces In A Modern Style (its original release was hampered by copyright issues) presumably he was aware of its potential to tap into the tension between popular and classical music. “I’m aware of a lot of awful car crashes when they’ve collided before, in particular the ‘Symphony for rock group and orchestra’ syndrome, ” he says.

“I also didn’t want to choose repertoire that was over-familiar, as pieces of music kind of write themselves off because of that. It was a trick to find something that strikes a chord, just a conduit for the composition. Although, having said that, I did put a few bleeps in, which is something I’ve got better at but find almost impossible to resist!”

The choice of repertoire included music from Arvo Part and Gorecki, and the two composers had contrasting reactions to his arrangements. “Arvo Part was rather negative. When I was going to perform at the Queen Elizabeth Hall he forbade us from doing it – part of the huge control that exists over who performs works. Gorecki was very sympathetic about it though, he was amazing.

“I’ve listened to all the Graham Coxon records recently, have realised just how great they are!”
– William Orbit bigs up the Blur axeman

“We had a conversation where we kind of spoke in French, and he could easily have not let me use his music but he was happy to do so.” With Arvo Part, however, Orbit’s view of his music remains unaltered. “The fact he wouldn’t let me do it doesn’t change the fact that I’m a huge fan, and I did actually get his autograph. His music is highly spiritual, and the Russian Orthodox informs most of it for real. I think he’s on his own plane – if you listen to Cantus In Memoriam Benjamin Britten it just takes you to another place, and I defy anybody not to experience that.”

Other arrangements of classical music played apart. “Yes, I listened to Wendy Carlos and the Expanding Head Band. I also used to listen to John Peel under the bedclothes with those little pink headphones that used to be around. I remember when it was just Radio Luxembourg, Caroline, the Home Service and the Light Programme. Bob Harris now sounds really MOR compared to, like, grime tunes on Radio 2!”

So does he like grime? “I’m aware of it. One collaborator of mine is Verb T, who’s very much part of the UK hip hop scene. I like British rap music, it’s getting pretty good right now, although it’s not a field I would write in.”

The record is roughly half vocal, half instrumental. Orbit talks of “getting frustrated with singers, but I love working with them. Two of the tracks on the album, They Live In The Sky and Spirals, we’re putting a cappella versions of them on the website. That’s the beautiful thing about websites and the web. The website is almost like a third album as well.”

“I had it lucky, as she’d just come off Evita where she’d had vocal tuition…”
– William Orbit on Madonna

Orbit has his own multitrack facility on his artist website, but while a huge asset it has proved less than easy to set up. “I love the multitrack zone – it’s an aspect of it all. It’s actually quite hard making a multitrack, you’ve got to make it so it doesn’t crash the computer! To make it easy and fun is really hard, you get a lot of websites with audio tools that have a great look but don’t end up doing that much. What I want is a musical experience, not a software hacking experience!”

Anyone pigeon-holing Orbit as ‘ambient’ would do well to listen to his remix of Blur’s On Your Own, a riff-driven industrial barrage that blows the windows wide open. So how did they react? “Well they were all smiling, they weren’t insulted! I think that planted the seed for my work with them on the album. I guess they were associated with the principle of breaking some rules.

“The band wanted so much to have the rock’n’roll experience, to explode in all directions atonce. I love the fact with them that when you first hear something new from Damon or Graham there’s often a sense of puzzlement, and sometimes an underwhelming feeling that then grows into realising they’re fantastic pieces of music. I’ve listened to all the Graham Coxon records recently, have realised just how great they are.”

Moving on to Madonna, he modestly notes that “I had it lucky, as she’d just come off Evita where she’d had vocal tuition, and so we were able to try something like the song Ray Of Light. It’s just a semitone higher than she’s comfortable with but we thought the strain really helped. She got frustrated when we were recording but you want that bit of edge with singers, that thing of reaching. You can’t fake it, and you can hear it when she cracks it on the record. Live, she has to sing it very slightly lower, with all the dancing and everything going on.”

“I think Mutya’s got a fantastic voice, it’s a shame she left.”
– William Orbit on changing personnel in Sugababes

Ray Of Light was closely followed by the All Saints single Pure Shores, as used in The Beach. Orbit’s work with the Sugababes on this album is bound to draw comparisons, but the track (Spiral) is much more deeply felt.

“It’s really personal. It was originally going to be on their record, but somehow it slipped through the net. I didn’t put it on just because it was the Sugababes though. I think Mutya’s got a fantastic voice, it’s a shame she left. But then I think Keisha’s vocal on verse two is one of the best vocals I’ve heard! It took a lot of takes to get right but the more I’ve listened to it the better I think it is.”

A satisfied man, then – Orbit is enjoying his timeas a solo artist once again, though he’s never short of production offers. “No, but it’s much harder making a solo record! I think it’s like being a plumber, fixing other people’s music, but it’s definitely much harder with your own!”