Yann Tiersen: “It is not my job to define my music” – Interview 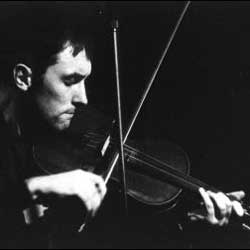 We caught up with him to chat about Amélie, writing with The Divine Comedy‘s Neil Hannon and to find out if he really is “the Gallic Michael Nyman“…

The success of Amélie goes on. Last year’s most popular cinematic release in France was well received elsewhere in Europe too and was nominated for a Golden Globe in this year’s Best Foreign Language Film category. The film has now been nominated for eight BAFTAs.

One of the BAFTA nominations is for the soundtrack album, composed by multi-instrumentalist Yann Tiersen. A mix of chansons, specially written tracks and material culled from four of Tiersen’s previous albums, the completed work has brought Tiersen comparisons with Michael Nyman at his best.

Amlie director Jean-Pierre Jeunet, already famed outside France for Delicatessen and Alien: Resurrection, heard Tiersen’s music one day while driving and, legend has it, immediately ordered the entire back catalogue of his work. He then asked Tiersen to compose the soundtrack for Amlie.

“I was working on my last album L’Absente and I told him I didn’t have a lot of time,” says Yann. “He started to search for material from my previous albums, then I added some new tracks. Sometimes he replaced tracks he chose from my old albums with new ones.” The finished result featured instruments as diverse as toy piano and typewriter.

In between coughs Tiersen is explaining how he came to complete the soundtrack. “For me it is like a game,” he wheezes. “It depends… sometimes I can have a period where for one month I can have a favourite instrument. I like vibes just now, for example. I don’t have a precise idea when starting to write of which instruments will be used. It is a bit of instinct. I try to see what fits.”

The success of Amélie was a surprise to Yann, “even in France as well as outside of it. We are always surprised when our work becomes successful, because when you work on a project you just think about the project rather than the commercial success.”

The Amélie soundtrack missed out on a Golden Globe nomination, but he is clearly not bothered. “I don’t like this kind of ceremony,” he sniffs. “People from the same universe deciding to congratulate themselves is not such a good idea. It reminds me of being in school.”

Londoners get the chance to hear how the Amélie soundtrack transfers to a live gig setting on 5th February, when Tiersen, his band and The Divine Comedy’s Neil Hannon play at the Royal Festival Hall.

His collaboration with Hannon goes back years. The tiny Irishman described Tiersen as his only satisfying collaborator from a range that has included chanteuse Ute Lemper and crooner Tom Jones.

“I like pretty much his work,” he says. “We decided to make a cover of David Bowie‘s Life On Mars. We also covered his piece Geronimo. I invited him for my last album, L’Absente.” The track Les Jours Tristes from this, his latest work, features Hannon singing his own lyrics with Tiersen’s music underpinning them.

Tiersen has been (favourably) compared with Michael Nyman, best known for his score for the Jane Campion film The Piano. Being called “the Gallic Michael Nyman” hasn’t hurt him, but he’d rather those who make such statements desist. “I like the early works of Michael Nyman,” he says, “and the way to approach classical matter with another energy, closer to a rock band. But I don’t think our music is very close.”

His name check of musical influences features some rather more surprising artists. In the early ’80s as a teenager he was influenced by the “post-punk culture” of bands like The Stooges and Joy Division.

“I like the energy of their recordings and their approach to music,” he says. “It is very instinctive. They played music without care for technique and gleaned pleasure from it.”

Tiersen himself is noted for cutting across musical genres with gay abandon. “It is not my job to define my music,” he says. “To keep the enthusiasm for creating, an artist should not care about genres.”

This interview was first published in 2002. A shortened version appears on the BBC News website. Read our 2010 interview with Yann Tiersen here.