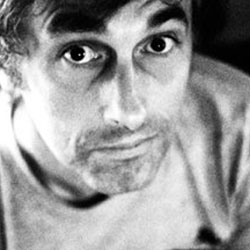 “You have a choice in life,” says Yann Tiersen, lounging on a sofa in the Kensington office of Mute Records. “You can be quiet and assume (sic), or you can say fuck it and do what you want. I prefer the second way.”

This is the philosophy that informs Tiersen’s new album, Dust Lane, and it was thrown into sharper focus by the deaths of his mother and a close friend during the recording process. Tiersen, best known for the much-adored music that appears on the soundtracks of Amelie (2001) and Goodbye Lenin! (2003), spent two years adding layer on layer to the expansive post-rock textures that make up Dust Lane.

Its dramatic highs and lows are as full and ecstatic as its creator believes life ought to be, even in the face of grief and hardship. Though Tiersen is quick to point out that (as with Corinne Bailey Rae‘s The Sea) the album was conceived before his bereavements, it does brood on mortality. The opening, ominous piano notes of Ashes call to mind John Lennon‘s Mother, before the song’s mood changes to one of hope and renewal.

The album is an international affair, recorded in Tiersen’s home in Brittany, in Paris, and (in the case of the title track) on an island in the Philippines. Featuring Bristol natives Matt Elliott (of Third Eye Foundation) as “the album’s narrator” and Dave Collingwood on drums, it was mixed in Castleford by legendary producer Ken Thomas. “I originally thought I would mix it myself,” says Tiersen, “but I asked Ken because I love his work with Psychic TV – you know the one with the skull (1982’s Force The Hand Of Chance) – and what he does with vocals. I like the sound to be a bit blurry. There were so many textures on Dust Lane, I think Ken is the only person who could have done it.”

“French people still think France is so important. Even abroad, when I meet French people they can be so arrogant.”
– Yann Tiersen

Tiersen himself does not see the album as a huge departure – he describes its predecessor Les Retrouvailles (2005) as “kind of a draft for Dust Lane” – but it will certainly surprise listeners who are only familiar with his soundtracks and 1990s albums. Its dense sound includes signature instruments like accordion and toy piano, but also analogue synths, multi-tracked vocals and astringent guitars.

Matt Elliott is most prominent on two tracks at the album’s centre, Palestine and Chapter 19. On the former, he simply spells out the word P-A-L-E-S-T-I-N-E. The track was prompted by a trip to Gaza, “somewhere I had wanted to go for a long time. It was the first time I was in front of the reality, and I could feel the gap between the news and what was really happening. Not that the news lies, but even if you shoot an image, there is a distance there. The name Dust Lane partly came from the image of the dirt road going into Gaza. I wanted to deal with it in the most neutral way, just by naming it: Palestine. It’s such a complex situation – I didn’t want to be part of that. I don’t have the elements.” By way of balance, the text of Chapter 19 deals with the Jewish ghetto in New York, taken from Henry Miller’s Sexus. Tiersen, who first read Miller as a teenager, says “he changed my way of living”, and particularly admires The Air-Conditioned Nightmare, Miller’s acerbic study of contemporary American culture.

With Elliott as the main vocal presence, the only clue that this is Produce de France comes from the accents on closing track Fuck Me, a duet between Tiersen and fellow Breton Galle Kerrien. Tiersen says it is simply “a love song I wrote for my girlfriend on tour” but its lyrics are in the carpe diem tradition, an exhortation to procreate in the face of the abyss: “I know you know we are falling into a deep oblivion… So we have to take care and share it together.” Tiersen also acknowledges the thematic resemblance to Serge Gainsbourg and Jane Birkin‘s Je T’aime… Moi Non Plus, though he is uncomfortable with the Gallic lothario stereotype. “I’m from Brittany, and we’re not really part of that Latin culture.”

There is no small irony in the fact that Tiersen is regarded as a quintessentially French export, yet feels very little connection to French music, nor even to La Republique herself. “France is a very small country,” he says. “It used to be an international country, many years ago. But French people still think France is so important. Even abroad, when I meet French people they can be so arrogant.” He blames the quota system, obliging French radio to play a certain amount of domestic music, for suffocating the music scene.

Tiersen’s true musical heritage is American and British punk and post-punk – he is more influenced by Joy Division, Michael Nyman and Penguin Café Orchestra than by French chanson. He only returned to his childhood instrument the violin after searching for string sounds to sample from other people’s records. “The same with the accordion. I couldn’t play a brass instrument – I tried but I was really bad – I couldn’t play the flute, and the accordion was a keyboard so it was easy,” he says modestly. “I didn’t know French musette music at all. Even people like Jacques Brel – I discovered Brel through Scott Walker. My parents listened to Brel, of course, but when you’re a teenager you’re not interested. So it was only when I heard Scott Walker’s versions that I thought ‘this is fucking good’, you know. The only French singer I listened to was Serge Gainsbourg.” Tiersen would go on to invite Gainsbourg’s muse Jane Birkin to guest on Les Retrouvailles.

And what of Amelie, the film that launched a thousand Eurostars, sending young dreamers in search of the kooky romance of Jean-Pierre Jeunet’s fairytale Montmartre? Tiersen’s evocative music, taken largely from his existing albums but with a few new compositions, was a key element of the film. “It’s funny, because Paris is maybe the town I hate the most on earth,” smiles Tiersen. “But I’m not ashamed or anything. If you have a huge successs with something it’s normal that you will be associated with it. Most of the time I don’t mind. Most of the time.”

The bestselling soundtrack album brought Tiersen a huge new audience, who may be surprised by his rocky live act, but the composer says that, on the whole, they take it well. “A lot of people, it’s like they went to my music through Amelie doors. Even if they come to my shows expecting Amelie, it’s so loud they soon realise it’s not the same! We do some of the tunes, but in very strange versions.” With an album as warm and ambitious as Dust Lane, who knows – that girl from Montmartre might even stop following him around and go back to waiting tables.

Yann Tiersen’s Dust Lane is out now through Mute. Tour dates and further information can be found here.