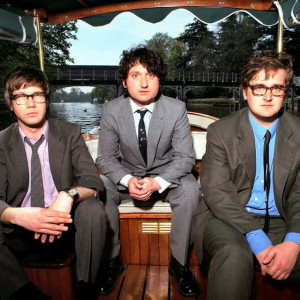 If that’s all they’re remembered for then we’ve all failed a little bit. Sick Octave is the Leicestershire band’s fourth album, a collection of noisy, peculiar, confrontational and slightly unsettling songs which do not slip soundlessly into the uninspiring ‘indie rock’ drawer that the Knives are usually shoved in.

The reason for this is that, after three albums on a major label, this one is a truly indie effort, recorded in a home-built studio and borne to fruition with money the band raised with a ten grand project on Kickstarter. “That figure was a shot in the dark,” said Henry. “We wanted to ask for the minimum amount we needed and a figure we thought we’d actually get. But we didn’t want to make it a massive deal – we didn’t want to be selling vials of our blood.”

The investor rewards were still pretty generous, offering the prerequisite album artwork, gig tickets and stickers, not to mention a £5,000 ‘wedding package’ in which Young Knives would play a half an hour set at your wedding with whatever “Celine Dion shit” songlist you could care to devise. Any takers? “No, which I’m quite glad about, because it would have been a massive ballache.”

“Standing in a room five days a week trying to come up with music together is quite depressing. It’s better to be apart and think of ideas, have time to yourself to let things grow in your mind…”
– Henry Dartnall of Young Knives

The album was already mostly recorded when the Kickstarter campaign began, funded by the band members taking normal day jobs. “Tom was doing some picture research stuff, which is what he did before the band,” says Henry. “I had a terrible sales job, but I used to drive quite a long way to get there and I came up with quite a few good songs while I was in the car, so even that was quite good.

“In the past, the overwhelming need to make money to pay the rent fuels the need to make the music, and then the music becomes something different. This time we wanted to take that element out and basically do it as a hobby; to write music that we like. Also, standing in a room five days a week trying to come up with music together is quite depressing. It’s better to be apart and think of ideas, have time to yourself to let things grow in your mind.”

The growth of Sick Octave from the last album, 2011’s Ornaments From The Silver Arcade, is evident: discordant synth solos and thick layers of eerie atmospherics have smothered the perkier, poppier stylings of their earlier stuff. “This is the first album I can genuinely say I’m proud of,” says Henry. “And I can listen to it. I’ve not had that before.”

You can’t listen to any of your other albums? “Well, I can, but I wouldn’t.” Are there songs in your back catalogue that you hate? “Yeah. Sometimes we’ve written a song and sent it to the record company people and they’re like: ‘that’s the single’. Then you play it again and you think: ‘I fucking hate this song. This is a bullshit indie song but it’s poppy and that’s why they like it.’ So you say that you don’t want to put it on the record and they tell you that if you don’t, you’ll regret it. And they’re right in a way: it is a single; people like it and they play it. But then there is a very specific perception of us from that one single.”

What single in particular? “Up all night. And Dyed in the Wool. Which is on our second record, [Superabundance] which I really like, apart from these moments of shit pop. I mean, they’re not bad: the production is pretty rocking but they’re just not really what we meant. But we wrote them so it’s our own fault.”

“We have to play some old stuff because we’re not complete bastards.”
– Henry Dartnall of Young Knives

Talking to Henry, an impassioned, eloquent, sweary and forthright man, it becomes apparent that The Young Knives have a point to prove. It might be just to themselves – to prove they are better than they have been persuaded to be thus far. And that’s when the tweed came up.

“We have a choice,” Henry states. “We either quit after the last record or we try and blow peoples’ minds. People always say to me: Oh, you’ve dropped the tweed. And I think, if I die, and people remember us as the band that wore tweed then I have fucking failed. It’s my job to come up with something more interesting than tweed.”

And they have. Sick Octave is a more difficult listen than anything they’ve previously made, and infinitely better for it. Take Maureen, a creepy, insidious, slightly perverted song which is never, never going to get on the Radio 1 playlist.

“It was a horrible pop song when we wrote it. We tried to put it on the last record and everybody hated it. So we saved it for our own record. I’ve never spent so long on one song. The keyboard wasn’t originally on it. When I added those two notes, it totally threw out the rest of the song, making it much more horrible and discordant,” he says. “It’s sort of based on the film Happiness with Philip Seymour Hoffman where he plays a horrible phone sex addict who is finally propositioned for a real encounter and finds he can’t move. The idea is that this guy is possibly neither good nor bad; he might be a really nice guy; he’ll probably help you carry your shopping upstairs, but there might be something at the back of his mind where he’s thinking really bad thoughts and you can’t ever tell.”

It’s quite a complicated premise for a song, and the accompanying music, if anything, carries more suggestion and nuance than the lyrics. This makes for a rather interesting live proposition. “It’s very restrained, it has to be. It’s really subtle and we all stand completely motionless: it’s very Kraftwerk. We play the album in sequence, so it’s the last song we play.”

So you send your audience off into the night to have nightmares? “No, then we kick into the ‘Young Knives Hits’ bit, so it’s not the very last song. It would be cool if it was, but we have to play some old stuff because we’re not complete bastards.”

Young Knives’ Kickstarter-funded album Sick Octave is out now through Gadzook. They play at McClusky’s, Kingston-upon-Thames, on 5 December 2013. More at young-knives.com.