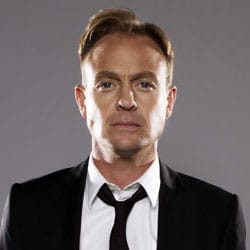 Say the name Jason Donovan and an interesting game of word association results.

Scott from Neighbours. ’80s pop star. Kylie Minogue‘s ex. Technicolour dreamcoat. Not gay. Drug addict. I’m A Celebrity Get Me Out Of Here.

With a new album in the offing – his first for 15 years – and a UK tour to follow, we caught some time with the versatile Antipodean entertainer to discuss all of the above… and a whole lot more.

I’ve been warned. According to his press officer, Jason Donovan is “a bit hyper” from a mixture of all-day interviews and lots of coffee. My mind boggles. After all, I suspect that, for someone who once had a high-profile cocaine problem, “hyper” is a little different to what other mortals might manifest.

Thankfully, there’s no problem. Or “no worries”, as a certain blonde-haired teenager used to say a lot on our TV screens every afternoon. Yes, Jason Donovan is excited but, far from bouncing off the walls, the slim, tanned and not-as-tall-as-I-thought-he’d-be guy who warmly shakes my hand simply seems glad to be back in the mainstream music business. So what took him so long?

“Well, I have been doing a lot in the interim. I’ve been doing a lot of writing and I certainly was shopping material to record companies but I wasn’t quite getting the momentum that I’d like – I’m not going to be dishonest with you.”

The record company execs may not have deemed his star bright enough to shift albums once upon a time, but all that changed following his appearance on reality TV show I’m A Celebrity… back in 2006, a link that he does not dispute: “It was a great experience and it’s done great things for my career.”

Jason, along with fellow contestants David Gest, Matt Willis, Myleene Klass et al, was suddenly in demand, appearing in the TV soap Echo Beach, going on tour last year and now releasing an album that he was pretty much head-hunted to make: “UMTV and Decca had an extremely successful ’50s and ’60s compilation record called Dreamboats And Petticoats. Obviously that period of songs is very popular so their idea was to match an artist like myself and record songs of that ilk. Jason Donovan has recorded Sealed With A Kiss and Rhythm Of The Rain… so it’s a logical step.”

I ignore the fact that he has just referred to himself in the third person. Instead, espying a Hank Marvin platinum disc on the wall of the interview room, I ask about the guest appearance on the record by the legendary guitarist: “Hanky Marvin! Obviously his pedigree speaks for itself and I wanted to have him on the record. To be honest, I didn’t work with him. He got the tracks in Australia and put his own stamp on them. We’ve been very authentic in the way we’ve recorded the album. This is not a record where you switch it on and go: ‘There’s a synthesiser!’ It’s an analogue experience and recorded in the spirit of the ’50s and ’60s. The whole thing is a rich, romantic, nostalgic love record.”

No synthesisers? What would his old production team of Stock, Aitken & Waterman have to say about that?! Speaking of which, I have to ask if he’s still in touch with Kylie.

“Not really. That was 20 years ago. She’s an acquaintance of mine. If she was here now I’d say hello to her but it’s an old girlfriend thing – that’s just the way it goes.”

In fact, Jason “got married this year in Bali to Ange” (with whom he has two children). He also turned 40. Did he find reaching that particular milestone traumatic in any way?

Somewhat shocked at Scott Robinson from Neighbours talking about such matters pre-9pm watershed, I try to recover by saying that I assume self-stimulation didn’t get stopped during the chemical years. He laughs, before answering the original question. “I didn’t drink until the age of 30. I used to smoke weed and do all that stuff without alcohol. I like a glass of red wine but it’s not something I’m addicted to and this week I haven’t drunk at all because I wanted to keep my life pure. You get older – most people tend to grow out of that sort of stuff and those sorts of addictions.”

Jason credits having children with changing everything (“they turned my life around”). While they are at school he’ll be on a three-week UK tour promoting the album: “The show is going to be in 3 parts. There’s the new music here (pointing to a copy of the album), an ’80s moment with songs people will know and love, and there’s an acoustic songwriting moment until all guns blaze to the end… It’s a bit of a record promotion as well as an opportunity for me to get out there and do what I love doing, which is communicating with my audience and my fans.”

Once the tour is over, the “next big thing” for Jason is to play one of the lead roles in the West End production of the cross-dressing caper Priscilla, Queen Of The Desert. He has clearly moved on from the time when he infamously sued The Face magazine for incorrectly asserting that he was gay and even turned down doing the original Priscilla film. “It just wasn’t the right time. I felt that at the time it was a bit sensitive – I’d just done the court case with The Face.”

Is it a decision he regrets? “Not really. Here I am doing the musical. It’s a wonderful Australian story, a great export for Australia and a really good, feel-good theatrical experience.”

Priscilla won’t be his first foray into camp theatre. I mention his appearance in the West End as The Rocky Horror Show‘s Frank ‘N’ Furter, a man not renowned for being an archetype of heterosexual behaviour.

“Am I good at drag queens?” he asks rhetorically. Enough said.

Jason Donovan may be more secure in who he is nowadays, but he still needs affirmation. He noticeably brightens when I say that I saw him on telly presenting Best Soap at the National TV Awards (“It was all right, wasn’t it?”) and, somewhat surreally, he insists on giving me an autographed copy of new album Let It Be Me at the end of the interview.