Interview: Jean-Michel Jarre – “Electronic music has a legacy, a family and a future”

by Ben Hogwood
published: 15 May 2016 in Music Interviews
Tweet

When you are already recognised and established as a pioneer in electronic music, what keeps you coming back for more?

In the case of Jean-Michel Jarre, current impressions are an overbearing desire to work with other people. That would explain the release of not one but two instalments of Electronica, a collaborative project with no fewer than 30 different artists. They range from the more obvious choices – M83, Pet Shop Boys, Gary Numan – to encounters with Massive Attack’s 3D, Peaches and Edward Snowden.

With the second volume recently released, we had the pleasure of discussing these collaborations with the man himself – and as befits someone whose social life can be followed through his recent music, Jean-Michel is immediately cordial and refreshingly candid.

For Electronica he met each of his collaborators in person, a relative rarity in today’s convenient climate of file-sharing and Skype. “It was very important for me to meet them in person and I think it really worked,” he confirms. “Some artists were an inspiration to me, from electronic music and beyond, and in their use of modern technology. Everybody that I asked said yes, and because of that we ended up with one and a half hours of music, which was why I chose to release the first volume before Christmas.”

Inevitably there were some surprises along the way. “You know when you’re starting with the idea of collaborations that you never know what the response will be. I absolutely did not want to send the files in an anonymous way. I really wanted to travel physically to meet and share the creative process with these people.

I think what surprised me most was the amount of generosity, because you don’t share that much in electronic music, and there are very few bands. It is often a solitary existence but to share it is unusual and exciting. The things I think and use create a collision with what they do, and it created an inspiring whole.”

He describes more of the creative process: “I wrote in the function of every artist, so that we could use it as a platform from which they could add all their bits. The wish was for a 50/50 creative process, and most of the time we kept what I had done. I was grateful they all said they were happy with the results, and that each person or act gave me the responsibility for the final sound. I also found their locations were important, as electronic music is often linked with cities and politics – the link with Jeff Mills and Detroit, for example, or the Berlin scene that was born after the fall of the wall. Beyond this it is linked with New York, Los Angeles, Chicago, Moscow, Stockholm – lots of different cultures and environments.”

Jarre recognises the importance of keeping elements of past, present and future in his choice of guests. “I wanted the selections to be contemporary, but even when I was working with artists such as Gary Numan, The Orb and Hans Zimmer, I wanted them to sound how they would in 2016. It is important to me when thinking of people like Numan and Pet Shop Boys that they have a timeless sound. This is due to the production, and I wanted to produce what we want to listen to in 2016-17. They are big figures of different decades, but it is interesting today to show a timeless style that is relevant for the future. It also shows that electronic music has a legacy, a family and a future for the next ten years and more, just like in jazz or rock. Moby, Air – all these people are timeless.”

“If some musicians are influenced by me, then that is what music is all about. I’d say the same about people from young generations: they are a huge influence on me.”

One of the more surprising collaborations on Electronica is with US fugitive and intelligence informer Edward Snowden, and Jean-Michel is keen to tell the story behind their work together: “A recurrent theme of electronic music is the ambiguous relationship that it has with technology. We have the smart phone, but there is a darker side to that when we feel we are being spied on. I also wanted to look at the climate of today and the idea lots of people are touching their phones more than they do their own partner.”

He gives examples: “The track I did with 3D from Massive Attack, Watching You, looked at the idea of surveillance. The song I did with Cyndi Lauper, Swipe Right, is all about the age of Tinder. Then when I was working on Exit, Edward Snowden made me think in a strange way of my mother in the French Resistance in 1941. A lot of people were considering resistance, and when the power puts in place actions that are negative, someone should stand up.”

“This is what Edward Snowden has done, saying not to stop the technology but to be careful how you use it. In the days when teenagers are attracted by populist figures such as Donald Trump or Jean-Marie Le Pen, people such as Edward Snowden are positive references for me. We spoke through video conferencing, then we agreed he could just talk and use two or three of his sentences to outline why he did what he did. I thought Exit should convey the quest and mad hunt made on one individual, coordinated by the three big security organisations.”

It must have been gratifying for Jarre to have noted the influence his music has had on many of the people he worked with for Electronica, though he modestly sidesteps that part of the question a little. “I enjoy working with people from different generations,” he explains. “If some are influenced by me then I think that is what music is all about. I would say the same with people from young generations, that they are a huge influence on me. Some of the people I would include in that are M83, Jeff Mills and Fuck Buttons. They all have a very individual sound. I think we take what we are attracted to as artists.” 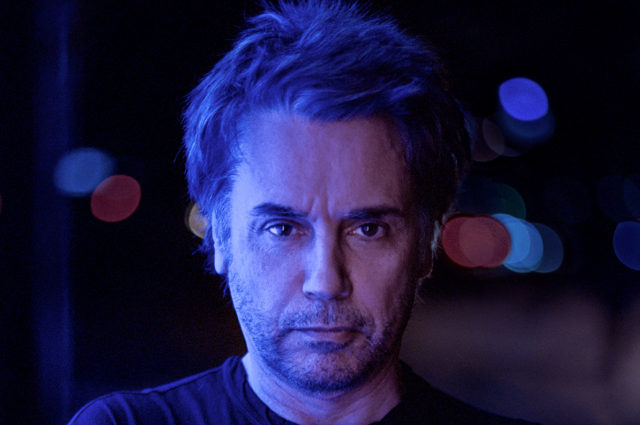 Jarre is due to take the Electronica project on tour in the summer and autumn, where he will play festival dates as well as a full European tour. He is keen to bring the shows alive, living up to the reputation he gained in the 1980s for distinctive live performance in venues such as Houston, Hong Kong and London’s Docklands. “I’ve always been involved in visuals for concerts, and I find that more and more important, especially with music that you can hear in a car, for instance. For a concert you have a visual expectation. I am doing lots of summer festivals this year and next year, and I’m working with a team to try and conceive a stage design that is modular and adaptable between somewhere like outdoors at Jodrell Bank and inside at the O2 Arena in London.”

It’s a challenge with which Jarre is familiar, and he expands on his thoughts behind live performance: “I had to approach the concert as a different animal. You are part of the audio/visual global concept when you are on stage. The visual element needs progression as well as the music. I’m a bit bored with small movies, the ones that are usually projected behind the performers. These are OK for YouTube or MTV, but you need a visual orchestration of the music you are going to play live. Even today I see concert footage that reminds me of something I would have seen 25 years ago. Right now I am working on a 3D footage design that I’m really excited to share with people, to show something different to what I did in the Docklands concert. It is spectacular, but I think it is also in sync with our days.”

“Music can be a necessity and a great help, it can have a soothing effect not just for the individual but for the community… It forms a strong bond”

The Electronica project was also Jean-Michel Jarre’s response to a tragic period in his personal life, and he credits music with its power to pull him through the other side. “Absolutely. Like everybody else in hard times I find that music can be a necessity and a great help. I lost both parents in a short space of time, and my publisher too, while I was also having a difficult time in my private life. I think music can have a soothing effect not just for the individual but for the community, and it is often the first link after a major disaster or an earthquake – it forms a strong bond. Going through this journey and having a sharing process has been a very positive experience for me. It is something that has not happened everyday but as musicians we all have references that are helpful.”

Perhaps inevitably when talking even about personal things, it is not long before Jarre comes back to the music, for it is clearly his life. Before long he is enthusiastically discussing Electronica, his collaborators and their relation with electronic music as we know it today. “Pete Townshend introduced electronic music in British music through The Who‘s Baba O’Riley. Gary Numan is a kind of replicant from Blade Runner. Fuck Buttons present a unique wall of sound, while the Pet Shop Boys’ unique texture is through their vocals.”

Their track, Brick England, he describes as “a tribute to the UK, which has been such a source of inspiration to me. It is the soundtrack of the British suburbs. In each space it is possible to share our toys, software and contribute to what electronic music is all about today. It has no boundaries, it is everywhere, and I would say it is not a genre but an approach to production.”

Electronic music, he says, “is like people cooking with wave forms. The preconceived ideas are that it’s cold and robotic but it’s not. The hedonist attraction to electronic music is not all right, it has a link to society in which artists are expressing themselves. Massive Attack use it as an essential part of their artistic integrity, Peaches references the burlesque, Pet Shop Boys bring in the community and Cyndi Lauper focuses on the minorities. They are all in touch and communicating with the outside world. Everyone’s in contact with our society and how it works, and equally importantly how it doesn’t!”

Both volumes of Jean-Michel Jarre’s Electronica are available now through RCA. He plays the Jodrell Bank Observatory as part of the Bluedot festival on 23 July 2016 and returns to the UK for a full tour in October. See jeanmicheljarre.com for more information.