Jennifer Touch: “My need to play live is raw and pure” – Q&A 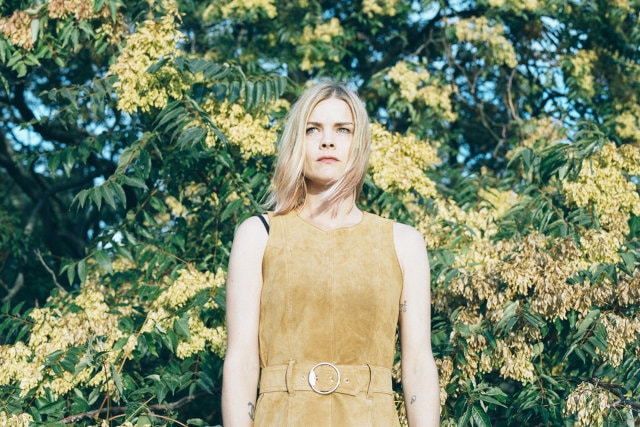 As Dresden born artist Jennifer Touch releases her debut album Behind the Wall, she took the time to discuss where she draws her inspiration from. Her moody, danceable yet aggressive electro sound – with aspects of post-punk and Gothic rock thrown in – is a unique, downbeat delight. Here she talks to us about her new video, and her new album:

The look of the video is highly stylised, and it gives us the first insight into your aesthetic direction as an artist. What was your thought process behind it?

The look was influenced by the image I have of DARIA, the woman the song is about. She strictly sticks to her own reality and hopes to be seen or found by a loved one in between her Illusions. She is kind of caged and lost in her illusion, but also kind of happy. The abstract animations and forms symbolise this special world she is living in, sometimes appearing in it, sometimes lost entirely. The forms are more present than she is, and at times she seems to be like a hologram on it, not the other way round. In this world she, as a person, is the illusion. I wanted a video that is evokes club visuals but with a hidden story. The random images make sense in the end.

What are some of primary influences behind the album?

This is hard to say as I was like in my own bubble while making this record. It was only about expressing my stories, my feelings. Definitely I was influenced by the people around me in that time and artists or bands I really adore. Especially when it comes to songwriting. And I tried to work out my own image of all genres I feel attracted to. There are of course the krautrock and wave synth sounds from the early ’80s as well as ’90s indie vibes like Sonic Youth or PJ Harvey. And Iggy Pop. And the Techno that came up that time. But I never planned this, I just focused myself on the essence of every piece of music. And I got kind of lost in it. I forgot the world around me.

What does your favourite album say about you? Does it give us any insight into who you are as an artist?

I have to mention three records that are my favourites. Firstly, Uh Huh Her by PJ Harvey, then Speak And Spell by Depeche Mode and finally Goo by Sonic Youth. I don’t really know what it says about me… That I’m into synths, indie – and damn good music.

Kim Gordon’s first solo record is a killer. She is the current coolest old school artist I know. She still has this rock ’n’ roll vibe and a sensuality that is not advertising or asking for something. I also like Drab Majesty from LA. His style is kind of well-known but there’s a special vibe to it. Umberto is a magic synth dude. Cold Beat are cool. And I really like what Curses does. My favourites have always been PJ Harvey, Depeche Mode, Pixies, Nirvana, Suicide, The KLF, Sonic Youth…

Is there a flawless, stone-cold classic album that you don’t think gets enough love? Tell us about it.

I think the first studio record of Nirvana, Bleach, is much more better than Smells Like Teen Spirit. It was recorded in a shitty shed for $600. It’s so wonderful angry and raw. The bass lines sound so cool! I’m really into debut records. Bands are still hungry, fresh and not manipulated by the industry. They make nice mistakes, are not polished. I love that. Also I was blown away when I first heard Elastica in the mid ’90s. I loved the vibe and the female coolness.

When live music returns, what can people expect from your shows?

That I‘m gonna be happy as fuck to play live again! This need is raw and pure. I need to express myself.. What I do comes from my heart. I think on my live shows there’s a special vibe between you and me. I invite you into my world but in the end I play for you. You will feel happy and loved. You will get the complete experience of what my music is like. It’s 50% the record, 50% live. Streaming live shows are a good way to preserve your sanity, but it can’t replace a live show experience. Fingers crossed. We all need this!

Jennifer Touch’s Behind The Wall is released on 5 June 2020 on FatCat. Tour dates and further information can be found here.