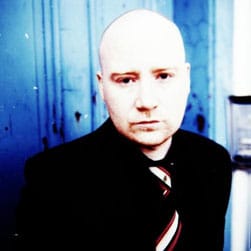 Jóhann Jóhannsson has not long arrived in London from Iceland, but he’s already available for interview. Having dropped into town to visit the Barbican, suspicions are immediately cast that he might be involved in some sort of orchestral project.

For the Icelandic composer has shown himself to be rather adept at casting a spell using orchestral means, most recently glimpsed on his Fordlandia album. For the time being, though, he’s content just to talk about music. And watch it. “We’re just coming in to meet people, this time, there’s no musical motive as such. Though we are going to see the Scott Walker show tonight.”

You might not think of too many similarities between the two, but both Walker and Jóhannsson have taken on classical music as an active influence. Jóhannsson has found other qualities to admire. “I would say anyone would be quite influenced by his daring, in the way he approaches his music, and in the sheer adventurousness of it. In that way I greatly admire Scott Walker’s work.”

He continues. “I’m a big fan of his older albums, and in particular the way he works with orchestras on those records, I think it’s quite amazing. One of the tracks I’ve been mesmerised by is The Electrician, it’s absolutely brilliant.”

When we move on to talk about himself, Jóhannsson seems almost a little humbled in comparison to one of his heroes. I ask him about the compositional approach to Fordlandia, though, and the flow returns. “It’s part of a much bigger piece as a whole whole,” he explains. “The IBM 1401 album was the start of this, when I began doing the research and work for it. That piece itself had a very long gestation period. It was written over the years 2000 and 2001, but it didn’t then come out on record until 5 years later.”

He pauses in thought. “All the time I was working on it I felt like there was room to develop it further. It always felt like it was the beginning of the end of a much bigger piece, if you see what I mean. Fordlandia, though, didn’t begin like the second in the series – it developed a kinship as it grew.”

Jóhannsson employs more traditionally classical techniques in Fordlandia, though his gradual ritardando’ (slowing down) in The Rocket Builder is striking. “That was very much in sections, the recording of that” he says, but offers more when I comment on the striking use of the choir in The Great God Pan Is Dead. “That was originally an instrumental track, and it was something that didn’t come alive until I added the choir – there wasn’t a place on the album for that until quite late. I found the text, and it had some associations I quite liked. It grew from that into a little sort of signature on the end of the album, a comment that has connections and resonances with the themes. It really fell into place.”

“I actually think these tough economic times are good for the culture.”
– Jóhann Jóhannsson

When talking of the classical influences felt on his music, Jóhannsson pays special attention to Jean Sibelius. “Of course. He’s somebody who has an incredible way with melody, and that was something that remained high up in my mind.”

So how does he manage the combination of orchestral writing and electronics? “I like to use electronics sparingly and subtly if I can, but also in places that people don’t notice. In Aerial View for instance there is a lot happening, but it takes place at a really low frequency that people don’t hear on normal speakers. I really enjoyed taking the acoustic recordings into the studio, and providing a layer that’s very important. I don’t regard my pieces as finished before they get into the studio – the layers come into being in the studio.”

Inevitably perhaps the talk turns to economical matters, with Iceland at the time of speaking held responsible for some of the UK’s financial discomfort. Not that it bothers Jóhannsson particularly – quite the contrary, he seems fired up by the adversity. “There’s always good things happening,” he claims. “I actually think these tough economic times are good for the culture.” A reaction against it, perhaps? “Yeah, I think there’s plenty of scope for that. Historically a lot of things come out of depression, and I don’t think it’s a bad thing for culture at all.”

With his own music, there is plenty on the horizon. At the moment there are some film projects, and I’m working on turning a short score for a film into an album. It’s a film with no dialogue, and I wanted to turn that into an album in a similar way that I’ve taken music for the theatre and rearranged it into a suite of twelve songs. It’s very much in the planning stages, though – and elsewhere I have a combination of commissions and other work.”

It’s time out for tonight though, as Jóhannsson prepares himself for the pleasures of Scott Walker. He does so with a clear idea of what music means to him, and how he plans to utilise it in the future with the small and big screen.