Johnny Flynn: “I don’t seek to write folk music, but people tell me I am” – Interview 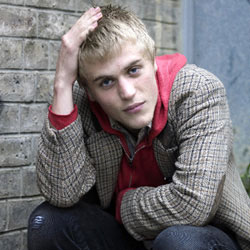 In the week before the release of his debut album A Larum, Johnny Flynn, tired eyed, tousle haired and clutching a copy of JM Coetzee’s Disgrace, has been busy.

Flynn was touring through Swindon last night and didn’t get to bed until 3am. He was up again at 10, and has been in meetings all day, he has a couple more press appointments, and will not be playing his Hox-to-Dot festival set until midnight. He’s not grumbling, but he does apologise if he doesn’t make sense at any point.

Despite the schedule, he loves the touring, especially the chance to catch so many bands, particularly at festivals, is amazing. Although he is apologetic about caving in and watching the football the previous night night rather than catching the first support at his Swindon gig. “Sometimes you just want a night in, but I felt awkward when I met them after and had to say ‘Hello, I didn’t see you’.”

Hectic diary aside, is he excited about the release of his debut album? “Er, sort of. I wouldn’t say excitement was the right word. I’ve known it was coming out on that date for ages. It’s pleasing that people will get to hear it”.

A Larum is a constantly rewarding joyous collection of original, erm, folk music, even if Johnny doesn’t always seem happy to be saddled with that label. “I often find myself wriggling out of that entitlement. It’s difficult when you are creating what you are creating. I don’t seek to write folk music, but people tell me I am. And if I start to think of myself going that way, I might become shackled by that.”

The folk scene isn’t something Flynn is necessarily unenamoured with. “It’s easy to feel enamoured of the image of someone travelling and playing guitar. I’ve just finished reading Woody Guthrie‘s Paths of Glory,” he wistfully rambles on in a reverie about the godfather of folk. “But maybe people should only be called folk musicians after they’re dead.”

Flynn probably doesn’t do himself any favours in shrugging off the folk epithet, even the album title has a whimsical, tabard-wearing, beard-stroking, cider-quaffing, pseudo mystical feel. “It’s basically an old English word, the origin of the word alarm,” Johnny explains. “I called it that for different reasons, the image of bells has all the connotations, the symbol of a bell as a religious image or as a wake up call.”

But it’s more than that – the album’s title has deeper meanings relevant to tradition and the modern day. “The larum is also a warning bell, a call to arms. So it’s a wake up call and an alarm, and a call to brings people together.” Flynn hints at his thespian roots explaining yet another meaning. “A Larum is also a stage direction, ‘A Larum Off’ means that there is a commotion off stage, and I like to think that we are maybe the sound of the players just outside the main action.”

A Larum is riddled with tales of tinkers, men of the road and people you wish the best for but are probably glad you don’t know. But Johnny explains how music is a way to get to know people, to understand them. Something that literature also achieves. “There’s a university professor who has an affair with one of his pupils,” says Johnny about his current read, Disgrace. “He goes to live with his daughter in the eastern Cape, but it’s interesting, when the book began you don’t know where you stand with your judgement of that character, but when you have lived with them for a while you start to understand them. It’s interesting to me that we’re conditioned to have that initial reaction for or against people as a blanket judgement. Often if you tell people stories they are a way of understanding judgement and help us to understand ourselves. Stories are an ancient thing, it’s part of every day life, and it’s nice to remember that. That’s what’s interesting to me about folk music.”

Explaining that some of the characters that inhabit his songs are loosely based on people he knows, he says that most are such universal things that when the idea for the song appears the words just seem to fall out onto his page.

One of the triumphs of the album is that it sounds like an old friend and is on first listen familiar – but not in a derivative, contrived way. Tracks like Wayne Rooney seem drenched in instant nostalgia. He recorded the album in the backwoods of Seattle with a producer steeped in the tradition of musical recording with minimal technology. “We recorded the album with Ryan Hadlow,” says Johnny, “We did a track with him in London and then decided he was the right man, so we went out to Seattle to his hand-made recording studio. We were four guys in an area we didn’t know.” The familiarity and nostalgic charm comes from a form of homesickness. “We could be far more creative about our home environment than when we are at home. Being so far from home made us think more about home.”

With references to old English, tales of tinkers and an album recorded in the Washington woods, could Flynn be any more folk? Perhaps a collaboration with Jay-Z might help shake off the mantle. With a wry smile on his face and mischief in his eyes, he tells of how Jay-Z’s people contacted him about a possible collaboration. “Yeah, this woman played him a song of mine and he was there in his bling offices and he’s like ‘that’s the shit!'” So now Jonny is, if someone with minimal sleep and gift for a flight of fancy is to believed, writing a track to go with one discarded from the American Gangster recording. Perhaps Johnny’s Glastonbury set will feature a very special unexpected guest.