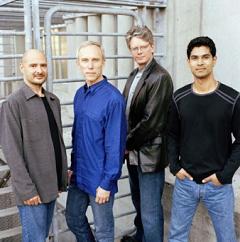 Few ensembles have done more for the string quartet in recent years than the Kronos Quartet, pushing the boundaries of a long-established instrumental medium that can be traced back over two and a half centuries.

Yet when we meet with leader and first violinist David Harrington to discuss the Quartet’s new Floodplain album, we find him in relatively humble mood.

Sitting in his hotel room, Harrington talks with incredibly measured tones of the recording process for the new record. “Floodplain involved many years of listening to music from a lot of different places and perspectives, groups, sounds and artists,” he explains. “At a certain point it began to feel there was a vocabulary we had to choose from, and using the experiences we’ve had to draw on from other albums like Early Music, Pieces Of Africa, Caravan and You’ve Stolen My Heart, it became clear there was something that had a gravitational pull to it. There’s a lot that could have been on this album but isn’t, and music that will be on future albums, so it began to feel like a body of information that belonged together.”

Was it their objective to link different musical cultures within the medium of the string quartet? He ponders. “I think the aim is more to give the listener a sense of connection and travelling, more than linking cultures themselves. I think things are unavoidably linked together; we don’t have to do anything about that! What we need to do is to find a way of dramatically taking a listener into whatever experience they are a part of.”

The hope being, presumably, that listeners go off and explore the other artists afterwards? He nods. “That’s exactly what I hope will happen. I hope that the audience for Floodplain will hear Tashweesh and want to know a lot more about Ramallah Underground, and that they’ll want to know a lot more about Almu Aga, from Ethiopia, or Aleksandra Vrebalov. I’m hoping that our explorations and discoveries will lead our listeners to want to experience a lot more music.”

This is a familiar principle of the Kronos Quartet, running through their existence from when they began with recordings of modern classical repertoire. I suggest that my own introduction to their music, the White Man Sleeps record, is a good illustration of what a string quartet can achieve. He considers this for a while. “I think we’re just getting started.” Really? “Really. That’s how it feels even now!”

His spirit of discovery confirmed, he continues. “I am – literally – on the edge of my chair! And I continue to be. I think the world of music has never been more thrilling or exciting than it is right now. We’ve never had a time when so many things are possible, and I want to make experiences, concerts and recordings that point to new possibilities or ways of imagining this art form, the string quartet, that Haydn started in around 1750”.

Those possibilities include the internet, where Harrington discovered Ramallah Underground. “Absolutely. YouTube, MySpace – there are so many ways to access interesting things in the world, and I hope Floodplain gives our audience a sense of that, and a potential for enlarging one’s sense of things”.

We move on to talk about the challenges on the new album, and in particular on his violin achieving the Galan sound for Mugam Beyati Shiraz. He takes up the story. “I first met Rahman Asadollahi in San Francisco, and he just opened his case and started to play for me, and the music he played was Mugam Beyati Shiraz. I was overwhelmed by the experience of hearing that music, having my own private concert, and I was totally overwhelmed. There was a quality of the sound and feel of this music, it felt connected to so many events, ecstasies and tragedies that I have no idea of, so much life over the centuries. It felt like I was suddenly involved in a connection that I had never been aware of through the music and instruments of this great musician, so when I began to play what I wanted to do was to give our audience the same feeling I had that day. It was quite a challenge!

“I am – literally – on the edge of my chair!”
– Kronos Quartet founder David Harrington shows the pioneering spirit his quartet retain.

More recently Harrington oversaw an anniversary concert of Terry Riley’s In C anniversary, a cornerstone of the minimalist repertoire. “In C exceeded anything I could have possibly imagined, it was one of the most ecstatic moments in my musical life,” he proclaims enthusiastically. “We had 69 musicians on stage altogether – several of the original ‘In C-ers’ from 1964, some from the original recording in 1968, a lot of friends of Terry Riley, and friends of Kronos – people we’ve worked with together over many years.

“I spent a year and a half curating that concert! I started out with the Uilleann Pipes actually, because a couple of years ago Terry Riley went to Ireland and found his ‘inner Irish’, and I thought ‘alright Riley, we’re gonna start this with some Irish pipes’. But then I was then told the pipes can’t play in C, and so we had to fashion a pipe to allow that. The concert was assembled one instrument at a time, in a very similar way to how our albums are put together, one layer at a time, then one piece at a time until something feels connected”.

Politically, the concert, given at the end of April, could not have been more appropriately timed. “I am – literally – on the edge of my chair! And I continue to be”. says Harrington. “At the time, when I was invited to curate that concert we were in some of the darkest hours of the Bush administration, and at that point one could only hope there would be some light at the end of that darkness, and fortunately there was and there is. It’s the same way with Floodplain; the years that it took to assemble this album were some of the darkest points in American history. Trying to find some way of expressing some confidence in what music can actually do has been a very important consideration for me, and I’m very happy to say that it’s coming out in another point in our history. I’m very cautiously optimistic that we might be in another chapter”.

As you might expect, the Kronos have a long list of commissions in progress. “I’ll start with the ‘elder statesmen'”, says Harrington. “Steve Reich is working on a new piece for us, also Henryk Górecki, and Vladimir Martynov. We’re also working on music with Damon Albarn. I’ve got ideas for a new album myself too, but it’s already taken me 20 years! I’ll reveal things about that at the right time.”

And the newer crop? “We have a host of wonderful new composers writing for us. Bryce Dessner is one of them, the guitarist from The National, he’s a fantastic composer. We’re also continuing a lot of our collaborations with people like Terry Riley and Michael Gordon. At any point there are generally about twenty people writing pieces for us”.

Was the Albarn collaboration a result of his more recent Chinese explorations? “What we just recorded was the music for the Manchester International Festival, so we created this studio piece together. He’s a magical musician who I admire very much.” Cards close to his chest, then – we’ll have to wait and see.

My final question to Harrington centres on what each member of Kronos brings to the quartet in terms of their personality. “Well I’ll start with myself,” he says, and laughs modestly before deviating wildly. “I think what I bring to the quartet is probably the idea that the sound of two violins, a viola and a cello is almost infinitely malleable, and it’s a marvellous tool in the hands of composers, and it can become almost like a sculpture or a liquid, it can become so many things. To me it’s the sound that I first encountered when I was twelve years old and has become the sound of my own mind and thinking. I want it to be vital and totally expressive, and want it to be fearless and go in as many directions as it can. So that’s what I bring to the quartet!”

He laughs, pauses again, and then continues. “John Sherba, our second violinist, brings this stability and solidness, he’s been a magical partner for all of 31 years now. He also is in charge of the recordings of all of our concerts, and is frequently making recordings for me of our various repertoire, so when our recordings are being assembled he and I are working together very closely. Hank Dutt has been in Kronos for the same length of time and has been our music librarian. If we need to drive somewhere, Hank is the driver! I think he brings this practical sense, and if you think of the string quartet as a turkey and avocado sandwich, the cello would be the bread on the bottom, the first violin would be the bread on top, second violin would probably be the avocado and the viola would be the turkey. To me the viola is at the heart of the string quartet, and to me no-one is better at that than Hank Dutt. Jeff Ziegler, our cellist, has been with us four years now, and I think he brings a perspective to our work having grown up with Kronos. He was born the month we had our first rehearsal.”

At this point room service arrives and it’s time for Harrington to tuck into his lunch – not a turkey and avocado sandwich, I note – and he bids a cheery farewell, having provided an in depth insight into one of the world’s busiest, eclectic and perhaps most creative ensembles.