Interview: Little Boots – “The minute I forget to have fun is the minute it goes wrong.” 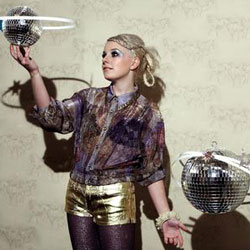 “Ooh, are you in Garageband? That’s exciting. It’s like doing a demo!” says Victoria Hesketh of the software recording her words.

As we await the arrival of her scrambled eggs, the sometime Dead Disco member, now better known under her solo moniker Little Boots, is discovering what major label success can mean for a girl’s daily diary, even ahead of a debut album release.

On the night before our meeting the 25-year-old attended her first BRIT Awards, draped in Bulgari jewels and stuffed in to a dress by Alexander McQueen. This morning, inevitably, she’s running late for cruelly scheduled early interviews.

She’s cheerily talkative all the same. “I’m so sorry I’m late,” she says, with a doe-eyed guilty countenance. “I hate being late. I’m always late! But I’m never this late. Anyway, I’ve got my coffee, so I’m sorted. What can I tell you? Oh, are you from musicOMH? I like musicOMH. I’m a big fan.”

This all tumbles out, without pause for breath or interjection. A conversation with Blackpool lass Victoria recalls her namesake, Victoria Wood, from up the road in Morecambe, who also speaks at a hundred miles an hour. One merely nods, arches an eyebrow at appropriate moments, and tries to keep up. Maybe it’s nervous energy.

But it soon becomes clear it also hides a vulnerable side when we breach the subject of her reviews. “I get sad. It’s so stupid! There’s was one that had one little jab at me, in the NME last week, and I was, like, nearly in tears. I can’t handle it! My boyfriend’s saying, ‘One day you’re going to get a bad review and you’re going to have to handle it,’ but I can’t! I get so upset. I just hate it.” So she reads all her press? “I do! And I really care. I genuinely get really bothered. I’m going to have to get a lot thicker-skinned coz I know it’s going to get a lot worse.”

She’s pre-empted a topic I’d wanted to ask her about. At the start of the year she was named the winner of the BBC’s Sound Of 2009 poll. Expectations of the acts who feature in the annual list, who’ve often yet to release their debut albums, are rarely anything less than sky-high. However good they are, when they turn out not to be the messiah, poisoned pens are immediately primed. Has she noticed a backlash, or has the poll opened doors?

“I think it’s great that so many critics want to write about me. I’m really grateful. Obviously it’s going to help. If it doesn’t break through to the next level, hopefully those people will still support me. Getting people to go to gigs, getting on the radio, sell records; that’s what matters, and it’s a massive help towards that.”

She also points out that not everybody named is as new as they seem. Of the class of 2009, aside from herself and The Sleepy Jackson‘s Luke Steele, now half of Empire Of The Sun, “La Roux used to do folk music; VV Brown was an R’n’B singer. Pretty much everyone I know used to be in a different incarnation. If you’re a musician you generally make music your whole life. I’ve been in tonnes of bands.”

Her own previous incarnations include her time with Dead Disco, a female three-piece formed when she was at Leeds University. “I think the first time you’re just so naive, and you see the music industry as this holy grail. You’ll do everything you’re told,” she says. “This time I do everything on my own terms.” When she left Dead Disco, becoming a solo artist wasn’t her immediate choice. She was in limbo, wondering if she should go down the route of songwriter-for-hire. “I wrote a bunch of songs,” she remembers, “but I didn’t really know what they were for. Then I realised they were mine, and I couldn’t give them to anyone else. That’s when I decided to do make a thing of it.”

A bunch of songs, a MySpace account and some homemade YouTube videos were a start, but she’d yet to become acquainted with the instrument that’s since become her trademark: Yamaha’s Tenori-on. “I saw it about six months ago,” she recalls. “I didn’t even have it at the start – the first YouTube videos don’t have it.” It’s not here with us today, so it looks like we’re not getting a demo. “It’s the last thing I want to see this morning!” she laughs. “That thing is the bane of my life. I love it and hate it. I have bloody sleepless nights over programming.”

What was it about the Tenori-on that grabbed her? “New instruments are something I support. No-one’s making new instruments; we’re still playing luddite, medieval based instruments, you know? Why, with all this technology in the world, is no-one putting it into creative things?” She hears herself and pauses. “Well, probably because they’re trying to save people’s lives or something! But you know, apart from that!”

She notes that music is increasingly made digitally on computers. “But with the Tenori-on there’s still the process of playing it, like with a guitar or a piano. That’s what I’m interested in. What new techniques, experiences and ways can you get (the music) across?” Her scrambled eggs arrive, and somehow she begins to eat while speaking. Perhaps she’s perfected circular breathing. “It’s just as much fun playing electronic stuff live as it is playing in guitar bands,” she enthuses, quite the electropop evangelist.

Live, she’s at pains to say she plays keyboards as well as the Tenori-on. But she believes keyboards are a barrier between the performer and the audience. Her miniscule microKORG makes sense; yet even then she keeps her playing to a minimum. “I want to connect with people,” she says through a mouthful of egg. “I’m assured enough that I’m not one of these people who has to go, ‘Look! I’m playing a keyboard!’ People know I can play. I don’t need to show it off. I enjoy fronting it, getting into it, dancing. I have fun on stage. The minute I forget to have fun is the minute it goes wrong.”

So she has fun as a solo artist, but is working with co-writers as rewarding? “A lot of people turn their noses up at co-writing,” she says, a little defensively. “I suppose you do get some people who turn up and cough and get a writing credit, but I know that I write most of the songs and I don’t need to shout about it.” Of course as a band member, she was used to collaboration. “There are loads of tracks I’ve written myself, but I prefer writing with other people. You just go into the studio and mess around. My weakness is in beats, bass and production, so if I can find someone to do that then it’s great.”

She found two such people to work on her album, the bulk of which was recorded after that Sound Of 2009 win. Hot Chip‘s Joe Goddard and the ubiquitous Greg Kurstin are the producers of the debut Little Boots album Hands; the latter, as well as producing Dead Disco’s final single You’re Out, also produced Lily Allen‘s second album. Does she see similarities? “We’re both girls and we’re both British,” she says, “but there’re a lot of British girls. Lyrically we couldn’t be more different! We’re different kinds of people.” She’s not going to pigeonhole herself as a particular kind of person though. “I think a lot of the new artists coming through don’t quite fit into neat little boxes, and that’s a really good thing.”

The song that led to everything else was the monster-sized Stuck On Repeat, which first appeared in clubs in early 2008; a remixed version appears on Hands. She picks up the story of its genesis. “I found this loop that sounded a bit like (Giorgio) Moroder made it ages ago, and I just started singing over it. I made it into one of my home demos and sent it to a few people. No-one got excited over it,” she notes, candidly. “But you just know yourself. You’ve got to trust yourself. And I knew there was something in it.”

Someone she knew asked to send it to Goddard and, after some persuasion, she agreed. “I was a bit embarrassed, but he loved it. I think he just saw the potential in the song that I could feel in it but that everyone else had passed over. Originally he was going to do a remix, but he ended up producing the whole thing. It was just one of those combinations and coincidences that happen and are perfect.”

As a result, Victoria moved to London, home of all the major labels, a year ago. The capital still excites her. “I’ve wanted to live here since I was a little girl,” she enthuses. “Sometimes I’m just walking down the street and I get happy attacks. I’m just so excited to be here!”

It provides a contrast with her native Blackpool. “I’m from a family of three boys; everyone sits down and eats as quickly as possible and talks at the same time,” she recalls, polishing off the last of her eggs as though a sibling were lurking, ready to grab at them. “When you grow up with three brothers you’ve got to get your food in you when you can, do you know what I mean? We all eat at a hundred miles an hour.” Blackpool remains a “reality check” for her, she says, but her family are very supportive. “I texted them from the BRITs: ‘Sitting next to Take That!’ I see them whenever I can; they sort me out when I’m a bit of a knackered mess.”

Her mother recently graduated from Lancaster University with a masters; along with the rest of the family she still lives in Blackpool, where Victoria wants her music to be played on the local radio station. “I totally do! Radio Wave, 96.5FM! But they only play really old stuff or really charty stuff,” she muses. And she’s up for playing a homecoming gig at one of the seaside resort’s venues. “The Empress Ballroom is where everybody used to play – the Rolling Stones, The Beatles, Queen, Led Zeppelin…” she tails off, dreamily. “Then it just fell off the map. But I think people are starting to play again now. The White Stripes played and did a DVD about five years ago. That kind of put it back on the ‘cool’ map.”

Before she can consider adding to the Ballroom’s rich history, she has her album about to drop. With that and a summer packed full of festival bookings lined up ahead of her, Victoria Hesketh marches forth into 2009. Her boots may be little, but her future’s already looking big.

Little Boots’ album Hands is out now. Tour dates and further information can be found here.