Lucy Gooch: “I wanted to make something more experimental with a dissonance and eeriness to it” – Interview

The Bristol-based artist on her new Rain’s Break EP, taking inspiration from 1940s films, the lasting impressions of singing in choirs and moving away from looping to more organic arrangements. 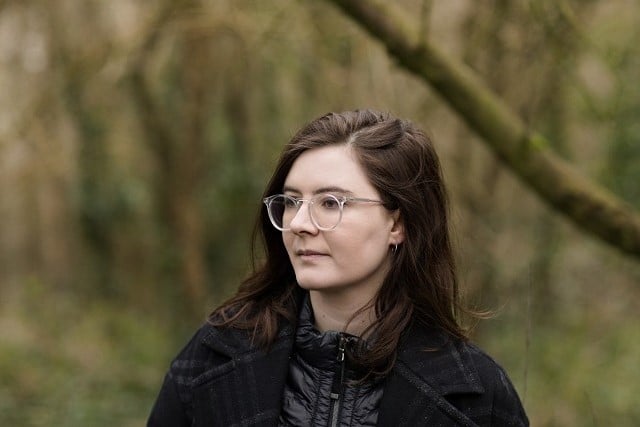 Rushing, the debut EP released by Lucy Gooch at the start of 2020, might have only been 18 minutes long but it possessed enough in the way of soft, spacious sounds to mark her out as an artist to keep an eye on. Reconciling elements of vocal, choral and ambient music into one coherent whole, it had an alluring weightlessness to it, not to mention an enduring sense of mystery. Her new EP, Rain’s Break, sees her carry these qualities forward but it also feels bolder and more defined, her vocals more foregrounded and the arrangements more ambitious.

Opening tracks 6AM and Ash And Orange hint at how she’s operating in similar realms to the likes of Julianna Barwick, Grouper and Julia Holter and Chained To A Woman suggests a meeting of Boards Of Canada with late period Cocteau Twins. It Brings Me Back To You meanwhile sees nebulous synth shapes surround her vocals in a way not dissimilar to Vespertine-era Björk. For all these comparisons however, the EP possesses a freshness that helps it stand on its own terms, ethereal but also tangible.

What was the background to Rain’s Break? Did she start working on it soon after Rushing? “I took a bit of a break after Rushing came out but soon things were percolating again and I was collecting ideas” she explains. “We had quite an early, hot summer last year and I started to feel more creative in the evenings when the temperature was cooler. I’d end up staying up late writing. It was quite a long process of going through those ideas and rearranging and improving upon them. Then I invested in a Prophet synthesiser and that massively helped everything along and re-energised some of the songs. When I initially wrote Ash And Orange I played it on a Roland synth but on the Prophet it sounded much more church-like and much more resonant.”

EPs feel like a format that works well for her at this moment in her career. “The subject matter for Rain’s Break would have allowed for an album’s worth of material” she adds “but it didn’t quite work out. It’s been a great experience to do something succinct and fully formed though. It’s made me realise I wanted a wider sound to my music.”

Lead single Ash And Orange partly came about after Gooch had been listening to recordings of women’s choirs from the 1930s. How did that develop? “I went through a bit of a 1940s/50s film binge and heard a lot in them. I’d always loved that style of women’s choirs, even in animated films from childhood. They’d always have these flowery, warbly choirs. I wanted to make something that was a bit more experimental with my own voice that had a sort of dissonance and eeriness to it.”

One pleasing quality to it is how it’s very much a track in two parts. Did she set out with these sorts of structures in mind when writing? “That has started to happen a lot. There were times when there would actually be more parts, sometimes up to four parts in a track, but it reached a point where I started to cut bits. There were things that I loved in there but some parts were a little overpowering and they didn’t get used. Maybe I’ll turn them into songs further down the line. I always have lofty ambitions of making longform pieces that will go through different moods or phases. I’m hoping I’ll be able to do that on an album in the future. This EP was a transition away from using looping as a way of writing to arranging more organically myself. Sometimes there’s something really satisfying about looping but I think I had become comfortable with it and it felt like it was time to move sideways. I’m sure it’ll always be part of my music to a degree however as there’s something addictive about it.”

When she was younger Gooch sang in various choirs and it’s a subtle influence that can be heard in the background of certain tracks on the EP, especially the cleansing opener 6AM. “I was in lots of different choirs when I was a child, both religious and youth choirs” she explains. “I grew up in the countryside in Norfolk and there wasn’t always much to do. It was a way for my mum to entertain me and my sister so she took us to these choirs. The atmosphere could be almost disciplinarian and stoic, you weren’t really allowed to shine individually, everyone was encouraged to stay in their boxes. But I think it left a big impression.”

She also reveals that some of the EP was inspired by the early technicolour films of Powell and Pressburger, in particular Black Narcissus. “That was a very formative film for me. It’s such a mad film, I first saw it when I was 16 or 17. I had an amazing film studies teacher who recommended it to me alongside the films of Powell and Pressburger. It’s so passionate and there is so much weird stuff in there about women’s sexuality, repression, jealousy and madness”. She goes on to reference the monsoon scene at the end of Black Narcissus as being particularly influential on the EP and there’s certainly a strange parallel noticeable in the title track, which has its fair share of dramatic ‘sonic downpour’ moments.

How would she describe her musical tastes? Are there any artists in particular that inspire her to make music? “I listen to all sorts of stuff. I’ve always been very behind the times with my musical interests. I’ve always liked outsider art and people who are on the fringes of genres. I’ve also come really late to some amazing people. I’ve been trying to look further back over the last few years as I realised that it’s important not to absorb influences from other artists making music at the same time as you. I’ve been listening to Joni Mitchell, Scott Walker, Robert Wyatt and Kate Bush. I didn’t really know her records and then someone played me her albums on a record player and I just got it. I think some people avoid things because they almost know they’ll fall in love with it and it’ll be overwhelming and it’ll take over.”

It might be early in her career but there’s certainly the potential for this to also happen to those coming to Gooch’s music for the first time. Rain’s Break offers further proof of her ability to create magical, miniature sonic worlds that are modestly awaiting discovery.

Rain’s Break is out now through on Fire. More information can be found at lucygooch.bandcamp.com

More on Lucy Gooch
Lucy Gooch: “I wanted to make something more experimental with a dissonance and eeriness to it” – Interview