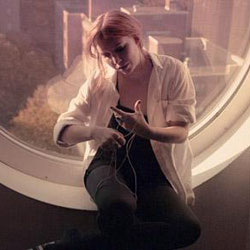 Li Lykke Timotej Zachrisson, to give pint-sized Lykke Li her full name, is a Swede who has lived in so many countries even she’s likely lost count by now. Perhaps because of her nomadic lifestyle, at the tender age of 22 she’s found herself a major label deal on the back of catchy debut single Little Bit, the video for which first piqued online interest.

Thus it is that at her London label’s office at stupid o’clock one Tuesday morning, Lykke is reclined, with coffee, awaiting her first interrogation and seems to be a little… down. It’s not immediately clear if she’s suffering possible ill effects of alcohol, is sleep deprived or just not particularly bothered with talking about herself. Maybe she’s just bored.

Raised by artistic parents, she lived in Portugal for five years and spent winters in Nepal and India. “I’ve been travelling for 22 years and I’m kinda tired. I really need a home but I don’t know where,” she sighs. On first listen to her music, snatches of moods and instrumentation from her wandering childhood years can be heard – Little Bit’s marimba-like hook, or Dance Dance Dance’s cutesy vocals. Or maybe that’s just one impression.

Lykke prefers to leave obvious musical lines out of her songs, letting the listener fill in the bits between the bits, as she explains. “I picked soundscapes, heard stuff and wanted this kind of feeling. You have to pick inspiration from movies and everything for, like, years,” goes her prescription. Once she picked the sounds she wanted from a palette offered to her, it was all systems go. But, to put things in their proper order, I ask about her writing and recording process.

Her debut album Youth Novels was co-produced by Björn Yttling, a third of Peter, Bjorn & John. For about two years, she narrates, they worked very sporadically – maybe two hours one month, three hours the next month. Eventually they did an intense session for two months in 2007 in New York and the album was born.

She’s candid about where her skillset ends and those of others begin. “I know exactly how I want it to sound but then I don’t have the knowledge to play it on the bass or the guitar. So then I have to use Björn. We work very well, like a duo. I’m Paul McCartney and he’s…” She backtracks. “No, I’m John Lennon and he’s Paul McCartney. I’ll write the song on piano, with chords, and then we just play around. Then I’m like, yeah, that’s right. And then we do it.”

As to reaction to her material, Lykke is happy that she likes it. If someone else does too, well that’s fine, but “Normal people wouldn’t really dance to them like I do anyway,” she shrugs.

The album leaves drums off in places where they seem to belong. The Knife do this as well – you find you’re dancing wildly to a beat that is not being drummed in Forest Families, for instance. Apparently the Swedish parallel is coincidental. “I get turned on when I see somebody tapping their foot. I don’t like when there’s too much stuff because it gets confusing. Everybody feels there could be more drums, but it was a choice. Everybody feels the drums, but they’re not there, and that’s kinda cool,” she reasons.

Drums, including some additional skins for her, return to the mix in her live sets. Why the difference? “Live, I just want to run over everybody.” Oh. She pauses. “Maybe the album is the movie and the show is theatre.”

When asked how she met Björn, she broadens her answer to take in the beginnings of her music recording. “Well, Sweden is a very small country… I started to produce my own demos on CuBase, with a little keyboard and drum pads, and then I started sending them round to people. Because it would be boring to have a whole album of just me and keyboards. So this guy I know mentioned that Björn would be really good – I didn’t know him, because I was more into hiphop. But every time I’d try out stuff with them they’d be like, oh my god your voice is so weird, you know? The indie scene was totally unknown to me. I was told he’d worked with all these bands, but I hate all these bands, I thought they were really dull. But then I met him and he had the same kind of mentality as me. We’re both really hiphop in the mind. Punk. So we just got along. I think he liked me because I was different. All the other bands had hair in their eyes and were really indie and only liked Bruce Springsteen. But I love Eartha Kitt and A Tribe Called Quest and Kate Bush.”

Perhaps inevitably she’s been compared to compatriot Robyn, but Lykke doesn’t believe that’s fair. “If I was from France I don’t think people would compare me to Robyn. People are stupid; very narrow minded.” Oh. “But she’s great,” she remembers. “In Stockholm everybody’s been talking about her since I was a kid, but I hadn’t really listened to her music.” And then she says a peculiar phrase for the first of several times: “That’s not my idol.” Robyn showed up at Lykke’s Camden Crawl gig and duetted with her. They have common friends and performed together with Kleerup.

On the subject of pop divas who stand comparison, what of these rumours that Lykke is a big fan of Madge? “That’s how I wanted to be as an artist, growing up,” she explains. “I think everybody born in the ’80s are very influenced by MTV, and she was on it. She was crazy in terms of how she performed, though music-wise” – that phrase again – “that’s not my idol. I loved In Bed With Madonna. Now it’s a whole different thing. That’s not one of my idols anymore. When I was 10 and needed a role model and couldn’t really find one in Stockholm, I was thinking, yeah, Madonna.” Not exactly a glowing endorsement of arguably the most influential female pop act ever, but that’s not her idol.

So who does she like? “I don’t like so much stuff,” she sniffs. There must be someone? She thinks. “I saw some Dizzee Rascal, he was great; Bon Iver… Eartha Kitt… I like seeing hip-hop.” That sounds like quite a lot of stuff.

She also likes making videos, it transpires. The after-hours house party captured in Little Bit was for Lykke a hark back to MTV. “Your dream when you become an artist is to do a video. So I was doing the EP and we didn’t really need a video, but I said I’m doing it anyway. I had a thousand pounds but that’s like, nothing, you know, coz it’s shot on film?” So the cameras were borrowed. “And I called all my friends and asked them if they could be in my video.” Her friends helpfully agreed, and she’s discovered as a result that she quite likes making videos.

“I’m young. I don’t have intense songs because I’ve not been through rehab and divorce and blah blah blah.” – Lykke Li explains her body of work to date

Early reviews of Lykke’s music focused on the witterings of cyberspace, specifically blogs rather than that oft-cited conduit of music to youth culture MySpace. Bloggers foamed with praise for the precocious Stockholmer. “Blog-birthed” was the dreadful phrase dreamed up to describe her. Lykke sees it as a necessary evil, if only for now. “The whole internet revolution is kind of sad. It’s not very long lasting, it’s a very quick thing. When the internet crashes I hope I’m still here.” She’s convinced it’s going to? “Yeah! At some point it has to. It’s a positive thing… and it’s where the kids spend all their time… but I miss having pen pals. I wish we could write more letters.” The internet is on notice – Lykke Li has spoken.

But her album title had already hinted at a preference for the written word being on paper rather than on a glowing screen. She explains it thus: “Youth Novels. That’s exactly what it is. I had this book I wrote down all my ideas and lyrics and I wrote Youth Novels on the front, it just came out. Every song is a chapter in my life – I’m young. I don’t have the most intense parts of my life because I’ve not been through rehab and divorce and blah blah blah; it’s about my teenage years. I did all the artwork for the album, so you could read the lyrics as a poem.”

Some of those lyrics can sound a little bit cute, and knowingly so. But Lykke explains there are no generic, pulling-the-heartstrings moments. “Little Bit refers to a very specific situation. It’s not a happy song – it’s about me being in love with you and you’re not in love with me and I gave you all my body and now I want to… It’s not humorous. It’s tragic,” she states matter-of-factly.

Youth Novels appeared in the Nordic region back in February, so it’s no surprise to find that Lykke’s thoughts are already turning to a follow-up, just as the UK gets its dose. But there are obstacles to be overcome. “I have to tour, and then I have to have some time off to just write. I have already how I want it to sound in my head,” she says, sounding a trite frustrated. “But I don’t have a minute to write a song right now.”

She considers that her voice has developed and live she has a different sound to on the album. But for now the world has Lykke Li’s Youth Novels. With her admiration for Madonna’s business skills and her mutual friends network seemingly including every musician ever to emerge from Sweden, who’d bet against Lykke Li going just a little bit further?