Interview: Marina And The Diamonds 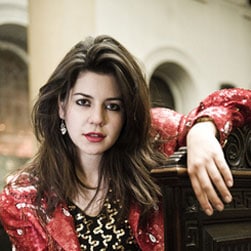 Marina And The Diamonds is the creation of Marina Diamandis, a big-voiced lady who’s gradually building momentum towards her major label single debut with a slew of EPs, singles and festival appearances.

With her debut album expected early in 2010 – and likely to make everybody’s ‘Ones To Watch’ polls ahead of release – and her vocal dexterity and operatic grandeur earning her the accolade of being mentioned in sentences alongside Kate Bush, we thought it was high time we pulled up a chair for a little chat with the Welsh wonder.

But when namechecking female icons it’s not La Bush’s name that’s first from her lips. Instead she enthuses about the rather different iconic lady who inspired her.

“Brody Dalle’s voice is the most beautiful thing ever!” A description the heavily tattooed punk doyenne of The Distillers would surely find quite amusing. So punk ladies are a big influence on her, then?

“Definitely. I like voices that aren’t technically perfect and have some kind of edge to them.”

Strange. For Marina’s voice is, technically, perfect. Her first EP, Crown Jewels, appeared in June, showcasing a voice that is often manipulated and explored like an instrument with a highly skilled musician at the helm. It trembles, soars, crackles and cracks. But she readily admits to being no virtuoso.

Her innate talent has meant her debut album is mostly self-penned, with a couple of co-write credits going to S’Express member and Debbie Harry collaborator Pascal Gabriel – no surprises that he started off in punk band The Razors.

Quite impressive name dropping is becoming a professional standard for Marina: her first video was directed by fashion photographer extraordinaire Rankin and his directorial partner Chris. They had “quite a small budget,” she recalls.

“I have no idea what that world really is like and so I maybe naively comment at the moment.”
– Marina Diamandis on blogging

“Rankin and Chris really liked the song and came up with an idea of being caked in something like a second skin and it slowly being peeled away. Then I suggested the glitter and rhinestones, which isn’t that clever because it’s so closely connected with diamonds. But it turned out really well, they were fantastic to work with.”

So the visual aspect of the job is important to her? “Yeah, definitely. I would say it’s one of the most important things. It counts for probably 40% of everything because I think the live show should be, not necessarily aesthetically pleasing, but just have some marked character, in what I wear or how I perform. It’s another way of expressing music. It’s really helpful. Like videos – I can’t wait to do the next one.”

Marina has already garnered interest through another way of expressing herself – a blog. How much she loves America, why Britney Spears has gone “shit” and whether Shakira‘s new video constitutes soft-core porn are all topics she broaches with relish. She’s aware of the pitfalls of putting herself out there: “I think I’ll probably end up as a hypocrite because anyone who opens their mouth, genuinely freely, probably will. I’ll be criticised in the future. But I’m so young and I have no idea what that world really is like and so I maybe naively comment at the moment.” A novel defence.

What she is less outspoken about are those mysterious diamonds. Mainly, they seem to be her fans. Occasionally they are the session musicians who she takes with her on tour. But mostly it’s a flourish, another facet to the performance of this interesting, fledgling pop star. “My surname in Greek is ‘Diamonds’ so that’s where it came from. I like the idea of having some mystical element to the project. And that it wasn’t just connected with me.”