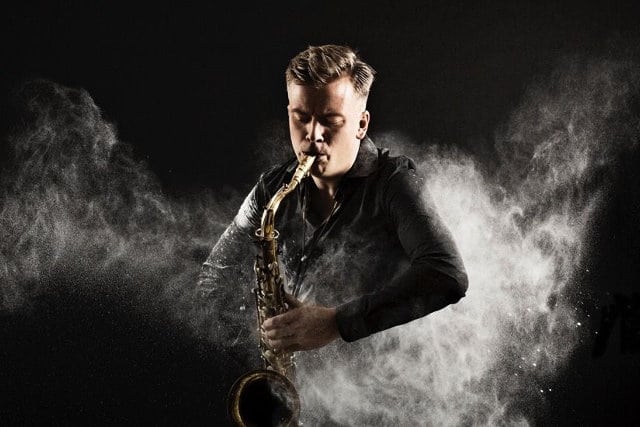 Even after years of practice and a determinedly perfectionist work ethic, saxophonist and composer Marius Neset clearly still identifies an inherent degree of danger in any live performance. Looking ahead to the imminent UK premiere of his orchestral Snowmelt suite of music (part of this year’s impressive London Jazz Festival line-up), he says “it’s very risky – in the studio, if something doesn’t work, you can always do it again. It’s going to be very different from the recording in some ways but I just don’t know exactly how yet. Can this even be performed live? We have to be able to hear each other and to have perfect sound but, beyond that, we all just have to 100% believe in it.”

Over his relatively brief but incandescent career so far, Neset has demonstrated a remarkable aptitude for pulling off seemingly impossible feats, such is the consistent complexity of his music. “Some of the parts were very difficult,” he admits of Snowmelt. “I didn’t even know if they were possible! Part 2 moves so fast in 9/8 time, there are all these ideas flying around – this is why I called it Acrobatics. But then you also have these very simple, relaxing parts.”

It is interesting that Neset should emphasise these differences at the heart of Snowmelt. With a reputation largely based on virtuosic, near-breathless improvising, and a surfeit of ideas in his compositions darting from all angles, Snowmelt is perhaps the most successful of all his works in achieving effective contrasts and space. This is in spite of the sheer number of musicians involved, including the London Sinfonieta and Neset’s own small jazz ensemble with bassist Petter Eldh, British pianist Ivo Neame and fiendishly dexterous drummer Anton Eger.

“Part 2 moves so fast in 9/8 time, there are all these ideas flying around – this is why I called it Acrobatics…” – Marius Neset

Neset admits that achieving this posed some signficant challenges. “It was hard to find space for the quartet,” he says. “This was actually the last thing I did. I did all the orchestrations and then integrated the band. There was all this rhythmical stuff going on that made me realise I had to use jazz musicians as well – because of the way it was going to groove and swing. I felt that the music needed it. Also, I thought the way we communicate together and the freedom that we have would make it more personal.” The integration of band and small orchestra on Snowmelt is sometimes bracing, sometimes beautiful and always captivating.

Whilst Neset is alive to the need to create space in his music, he also expresses some strident, individual and confident views on musicianship. “In the Conservatoire, you can be told that you are doing too much, playing too much, you should stick to one idea. Some of this is constructive but you shouldn’t listen to it too much. When you are practicing, you develop your own ear.” One of the most formative experiences for Neset was working with keyboardist and bandleader Django Bates at the Rhythmic Music Conservatory in Copenhagen.

The relationship between the two musicians was initially as mentor and student, but Neset quickly became involved in performing with Bates too (that Neset managed to secure an increasingly rare contribution from Bates as a sideman on his Golden Xplosion album is testament to the mutual respect between them). “It was a big influence on me when I played in the big band with Django Bates,” Neset explains. “He also had a lot of stuff going on in his music – it was amazing what he did with ideas. You can actually make music with a lot of different vibes. Now I love to have things moving around, a lot of colours, things changing all the time.”

Neset has described the process of making Snowmelt as “probably the easiest recording experience of my life”. Recorded in just two days at AIR studios in London, perhaps the nature of the space was a signficant factor in the overall success of the result. Neset agrees, “Before we even touched the music in the mix, it already sounded great so we really didn’t have to do that much with the sound. We used the natural reverb from the room a lot in the mixing process. The mixing engineer did a fantastic job in finding the right balance. We did less with this than we did with other records where I’ve tended to spend a long time adjusting various elements.”

“In the Conservatoire, you can be told that you are doing too much, playing too much, you should stick to one idea. Some of this is constructive but you shouldn’t listen to it too much. When you are practicing, you develop your own ear.” – Marius Neset

Neset is keen to credit an entire team in making the project work so smoothly. “The Orchestra, conductor, my own group, the engineers, everyone was so dedicated to this recording on a level I have never experienced before,” he enthuses. He also seems proud with the innovations of this album. “We have made a classical music that is very rhythmically complex,” he asserts, boldly. Whilst Neset is not the first to attempt this crossover and integration between very different musical worlds, he does seem to have done so with remarkable aplomb.

In addition to the levels of complexity in the writing, another key feature of Snowmelt lies in Neset’s sonic choices, not least the increased prevalence of the soprano saxophone. “I haven’t actually been working on soprano playing more than before,” he admits “but I’m feeling that I’m starting to find my own approach. I’m trying to get a sound that continues through the register. I’m feeling very much at home, very natural at the soprano. From the beginning, I had a clear idea of how I want to play soprano. I’ve been playing tenor for many many years. I listened to many soprano players – Wayne Shorter, Jan Garbarek, Branford Marsalis. I’ve tried to place myself somewhere between these musicians.”

Before Snowmelt, Neset worked with the Trondheim Jazz Orchestra on the Lion project. Whilst the next album (2015’s Pinball) largely saw him working with the smaller canvas of his quintet once again, it did also feature guest contributions from string and wind players. It seems as if Neset’s career is now set on a trajectory whereby he explores different settings and environments for his compositions. How important is the process of writing and arranging for different ensembles?

“I’ve always composed from when I was very young. It started when I was six years old. I played all kinds of instruments when I was younger. I remember when I was 17 when I got a commission in my local town to write something for 15-20 musicians. Of course, I didn’t know what I was doing with orchestration. I just did it! But I had a lot of musical ideas. I don’t want to be a classical composer, that’s not my goal because I have to play, but I love to think in the way of writing a score for musicians with lots of details.” It’s also clear that the lineage of composition in classical music has inspired Neset to write. “I was listening a lot to Mahler’s 10th symphony at the time I was composing (Snowmelt). Messaien, Bartok, even Bach and Beethoven too. There are so many things to discover there, it’s endless. Now, I’m almost exclusively listening to classical music. Before, it was only jazz!”

“Now, I’m almost exclusively listening to classical music. Before, it was only jazz!” – Marius Neset

This does not mean that the drive to play high octane, interactive improvised music has deserted Neset. Far from it, in fact, as he is still able to enthuse passionately about the rare longevity of his ensemble. “We know each other very well and it has developed through playing live. We are learning new music now and it is much faster. We all understand each other and the music very well. When we rehearse, everyone will know everything. You can start straight away working on the musical issues – we never need to resolve issues of technique.” Neset often comes back to the sense of ‘freedom’ offered by this musical relationship.

Neset always seems to be working on something, but perhaps it’s his work with the quartet that most consistently engages him. What is coming next? “I want to make another quartet record, to do a solo saxophone project, and to do a duo project. I’m composing lots of music these days but for the first time in a long time I don’t really know who is going to play it!”

He goes on to compare the difference between recording with a long term, established, well drilled band and the spontaneity that can result from less planned session dates. “You get a band sound, when you play for a long period of time. With Golden Xplosion, we hadn’t played together before and that gave the recording an amazing freshness and energy. So, I think I will do a project with other musicians but then return to the long term ensemble.” Even someone as dazzling and virtuosic as Neset may find it difficult to do everything all the time.