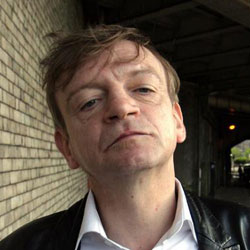 The Fall have been in business for over three decades, during which the band has featured more than 40 members. Notorious front man and founder Mark E Smith is the only constant.

Salford-born Smith recently collaborated with German duo Mouse On Mars in Von Südenfed, releasing the album Tromatic Reflexxions in 2007. This year he unveils his autobiography.

It’s the day after The Fall‘s gig at The Point in Cardiff, and Mark E Smith, leader of the band for the past 30-odd years, is sitting across from me in the bar of a downtown hotel. Legendarily unpredictable – MES can be naughty, nice, or merely downright obtuse – yet the Mark E Smith that rolls up is charming, garrulous, and not afraid to firmly put the record straight on some of the legends that have dogged him and his band for years. Welcome, then, to the wonderful and rather polite world of Mark E Smith.

Then again, for all I know our conversation could have borne the same relation to reality as a documentary on Channel 5. Smith has always been vocal about his love of the fantastic in literature; perhaps he now regards interviews as fair game to try out new fictions on unsuspecting victims? Maybe not, but I still wouldn’t be that surprised to learn that the joke was on me: Smith’s been giving interviews on his band for literally as long as I’ve had hot dinners.

Formed in 1976 in Salford, The Fall have endured over 30 years of an increasingly fickle independent scene, shedding record labels and band members with equal ease while also being an acknowledged influence on The Smiths, The Happy Mondays, Nirvana and Franz Ferdinand. The late John Peel, of course, loved them. So where do you start when interviewing someone who’s guaranteed to have heard pretty much everything that you’re going to say before? Call me predictable, but it’s difficult not to start with The Fall’s somewhat checkered history of hirings, firings, and on-stage fisticuffs. What does Smith think of his band as the revolving doors of indie-rock?

“Yeah, but there’s too much made of all that. Utterly truthfully, I’m sick of being in a position where you go to a gig and it’s just you… and the drummer.”

– Mark E Smith of The Fall

How do you coerce new blood into the band? “I don’t audition; luck of the draw, really. We’ve been playing together for about a year and a half, and with the wife” – keyboard player Elena Poulou – “for longer than that. I like these lads because they’re not rabid Fall fans. About a year and a bit ago, I had them three American fellahs” – the three members of Darker My Love that filled in during a US tour when Smith’s current line-up ran out on him – “but they’re working on their own project now.”

It sounds a bit like The Fall works well because you’re able to run it like a squad selection system, I suggest. That gets me a long cackle. “Yeah, yeah, we have an A team and a B team” …pause… “but it keeps them on their toes. I’m still objective about it – I’m a big Fall fan, believe it or not.” Does this mean that Smith likes to cosy up at home with a copy of Totales Turns and a pint of stout? “Not really, it’s too close, but I listened to the remastered version of Hex Induction Hour. That was good, that. Really clear. I remember when it came out – it was just like an hour of…” – at a loss for words, he gestures with a chopping, strangling motion in the air. “This time you could actually hear what was going on – the original was pressed up in France for next to fucking nothing. I thought it was the last LP we were ever going to make. Remastering it makes it what it should have been like.”

But just because you can now hear all the lyrics to Who Made The Nazis, don’t be conned into thinking that Smith supports our current culture of repacking and reissuing every last scrap of a band’s material. “I don’t like all that past things. I’m not really interested in all that. We’ve never, like, reformed, y’know. It’s a big deal, y’know, you get all these offers, like Wire do, and like The Stooges do. They say, if you do this LP, you can get a lot of money” – he’s talking about the Don’t Look Back In Anger gigs, where classic bands play classic albums in their entirety.

But Smith isn’t completely against the idea: he looks almost wistful when briefly discussing The Stooges guitarist, Ron Asheton, for whom the reformation with Iggy Pop was undoubtedly a financial godsend, and ruefully admits that “yeah, well, quite rightly, you want to hear this stuff. I mean, who wants to hear what the solo members of Gang of Four are up to at the moment. Then again…” – and, cackling, he can’t help himself on this one “who wants to hear the Gang Of Four anyway?”

Moving onwards. What about Wales, Mark? Have The Fall got any good memories of playing in Wales over the years? Smith sidesteps that one to namecheck the Welsh horror writer Arthur Machen – not a personal memory, I hope, as he died in 1947 – and obviously finds some amusement in Machen’s descriptions of strange, underdeveloped races speaking in weird, guttural tongues. Smith has avoided talking about nationalism and balkanisation, and he wonders about my current existence in Cardiff – “A Glaswegian in Wales? You must be freaked out, mate.” – while bemoaning the current state of the UK in general.

“They’re cheeky cunts, the BBC. You don’t work for them, do you?”
– Mark E Smith

But for all of his occasional outbursts at the world and everyone in it, Smith is extremely open, even welcoming, to musical collaborations. In parallel with his day duties with The Fall he’s worked with Inspiral Carpets, Coldcut, D.O.S.E., and most recently Mouse On Mars whose project with MES is the extremely ace Von Südenfed. According to Mark, he’s the one that’s sought out by each new band, who are undoubtedly looking for the cred that comes from an MES vocal, as well as a legitimate artistic need to collaborate.

But few of these dalliances have lasted for a particularly long time, although he suggests that a new project with Von Südenfed might be on the horizon. “We played in Norway recently – some cultural festival, or something. Yeah, I’d like to do another album. The kids seem to like it.” When I suggest that it’s a lot more accessible than Mouse On Mars‘ normal work, he stares at me from across his pint glass. “Don’t you forget that all these boys had careers in pop before, they used to be teeny boppers… they think just because it was in Germany that no one noticed.” Ah well; at least Underworld have some company in the embarrassing first line-up stakes, then.

But Smith’s collaborations aren’t limited to the musical world. Curious visitors to the BBC’s website over Christmas were treated to the frighteningly surreal sight of MES reading H P Lovecraft’s The Colour Out Of Space, backed with nothing more than a pint glass and a roaring fire. He looks like the lead in a made-for-TV ’70s Hammer Horror film with his leather jacket and oversized reading glasses. No-one seems to be really sure how the whole collaboration came about – Smith, it seems, included – but, no matter what our shared experiences of the downturn in quality of BBC’s programming – “They’re cheeky cunts, the BBC. You don’t work for them, do you?” – there is no getting away from the fact that you just couldn’t find anything like this elsewhere.

With so much said and written said about the band and the man himself, it’s perhaps surprising that it’s taken him so long to bring out his own version of The Fall’s history. In a month’s time we’ll all have a chance to read his own reminiscences via his upcoming autobiography Renegade: The Lives And Tales Of Mark E Smith. It’s his chance to write a bit, to fill in the gaps in his bands’ history, and while he originally was going to treat it like a footballers’ book – “you know, like I remember my first game, all that”, he ended up taking it more and more seriously as it progressed. Will it contain the final word on the many onstage bust-ups, the who said what to who, or even begin the long process of deciphering some of his lyrics? Probably not, but it won’t stop it being a top read.

In the final analysis, the reason that people like Smith attract so much interest is the near impossibility of separating truth from fiction, and as he saunters off with a final “cheers, cock”, it brings to mind nothing less than the famous final words from John Ford’s classic Western, The Man Who Shot Liberty Valance. “This is the West. When the legend becomes fact, print the legend.” As in the West, as in the North, it seems.