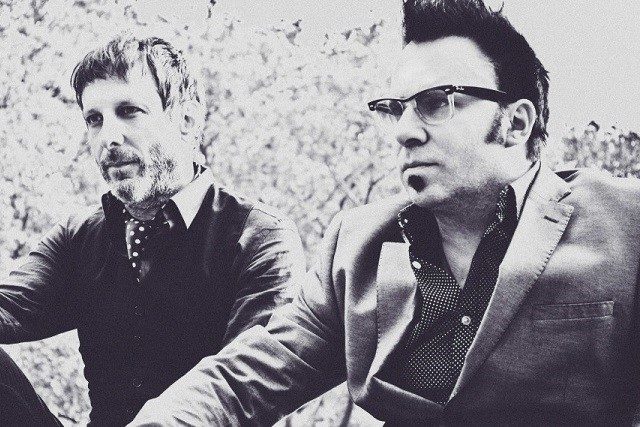 We caught up with guitarist Grasshopper to talk about the origins of the album, the music of Bobbie Gentry, how the project linked in with the recent Deserter’s Songs shows and covering other artists’ songs.

musicOMH: Hi Grasshopper. How are things in New York today?

Grasshopper: Well, we have like a snow storm over the weekend and now it’s raining really bad.

musicOMH: We’ve had a bit of that in London as well. Thanks for agreeing to talk about the new album. It’s obviously a really ambitious project. How did it all come about? Did it develop over a few years?

Grasshopper: It developed as far as getting all the singers involved over a long time. We recorded all the music a few years ago and that went really amazingly fast because we just really got into it and tackling these songs. The Delta Sweete was a record that we used to listen to a lot in the van when we’re on tour during see you on the other side and Deserters Songs. We thought we were just going to put this record out ourselves so we did the songs and they came out pretty and we were really happy. Jonathan sang a lot of the guide vocals. I was trying to see if he wanted to do some songs as duets but he really was adamant that he wanted to keep it in a female perspective and have female singers do it and keep it in the tradition of Bobbie and of what she set out to do with the record. We started asking around old friends and think of the singers that we wanted to sing on it. You know, we never thought we’d get Lucinda Williams or Norah Jones or Hope Sandoval. A lot of that was down to (label boss) Simon Raymonde and his wife Abbey. They helped us get a lot of the singers through Bella Union.

Grasshopper: Yeah, we knew Laetitia Sadier and we knew Rachel Goswell and we were just big fans of Lucinda Williams and Hope Sandoval. We kind of picked which songs we wanted each singer to sing and we found that there was such a love for Bobbie Gentry. It was pretty incredible how everybody just wanted to do these songs.

musicOMH: How did the recording process work? Did they join you at any point or did they record their vocals remotely?

Grasshopper: It was different with each one. With Lucinda Williams we flew out to LA and did it with her. It just so happened that Vashti Bunyan was in the area of the Catskills where we live and she was a few towns over visiting her sister. She came to our studio. Then with Beth Orton and Norah Jones we recorded those in New York. For a lot of them we just sent the tracks out because a lot of the women were on tour and stuff like that. So, they kind of popped into a studio on a day off and did their vocals. That’s what Susanne Sundfør and Hope did. So, we weren’t there for that but we kind of sent a little bit of direction, but just said ‘go for it’ and make it your own. Every track we would get, we were just astonished how amazing they all were and how different they were but it was all cohesive. A lot of the songs are very different, like Mornin’ Glory is a ballad, then there’s some of the old songs that Bobbie Gentry picked to do like Tobacco Road, songs she included for her story. Recording them was almost like being in a film.

musicOMH: It’s interesting you mention the stories and themes present on the album. Stories are quite a big part of Mercury Rev’s live shows so I thought that was a good match. I think the album has a lot of the magic found on Mercury Rev albums. Was that something that you made a conscious effort to try to project?

Grasshopper: Yeah, the themes in her songs were so mysterious to us. Like how the story in Ode To Billie Joe has the overlapping themes of the Okolona river and the bridges. The album does definitely tell a story. We really wanted that southern gothic feel that Bobbie Gentry had, although she recorded it in LA. In the Catskill mountains here there’s a bit of a connection to the Delta. There’s a lot of musicians who passed through here who either lived or recorded down in the south. Like Levon Helm from The Band wasn’t from the Mississippi Delta, but he loved it here in the Catskills because it reminded him of being back home. So, I think there’s a certain connection there.

musicOMH: Were the singers all given creative license to interpret the songs as they thought best? Some are fairly faithful to the originals, but others are different.

Grasshopper: Yeah. I mean I guess some of it was dictated by us in terms of how we interpreted the songs and the music. So, some worked out differently, like Tobacco Road and Big Boss Man. We tried to find some cool new ways of reinterpreting those songs while trying to keep the power of the lyrics. Jonathan and I have always been into things like spaghetti westerns and Warner Brothers cartoons and film music so we tried to bring a lot of that to it.

musicOMH: What was your relationship with Bobbie Gentry’s music? Do you remember when you first heard her music?

Grasshopper: In the late ’60s/early ’70s Jonathan and I were young boys and I remember hearing songs like Mornin’ Glory and Ode To Billie Joe on AM radio. I remember riding around with my parents on vacation, all packed into the car with the AM radio on and I’d hear those mysterious songs and wonder what they were talking about…

musicOMH: Did you think the album might help open up Bobbie’s music to a younger audience?

Grasshopper: Yeah, there was that connection, to expose younger people to our version and hopefully make them go back to the original and check out her music. A fantastic box set just came out.

musicOMH: I read (Mercury Rev frontman) Jonathan Donahue’s recent comments drawing a connection between The Delta Sweete and Mercury Rev’s See You On The Other Side in terms of them both being underappreciated at the time…

Grasshopper: Yeah. See You On The Other Side was a precursor to Deserter’s Songs and although Deserter’s Songs is more fully realised and developed, we still love See You On The Other Side. It was a really easy record to record, the shortest we ever did. We did it in six months but that record was kind of overlooked and we felt it was a kindred spirit with The Delta Sweete in that it seemed like it was only for hardcore fans or a cult thing.

musicOMH: Do you know if Bobbie is aware of the project and how this amazing group of musicians have reinterpreted her work?

Grasshopper: I don’t know. I mean, she’s in seclusion. We have some friends at Universal and I think they own her catalogue in most of Europe in the UK and when we were on tour in the UK in December they mentioned that they’re going to try to reach out to her and try to get the record to her. That would be great.

musicOMH: Do you think that there could be any live shows to tie in with the album?

Grasshopper: We hope to do something. I mean it’s kind of daunting and we’d have to figure out how to do it.

Grasshopper: Yes, exactly. We would have to kind of rethink it and maybe do it with maybe two or three of the singers doing more of the songs or something like that, ideally some special shows in some cool venues. It probably wouldn’t be a huge tour.

musicOMH: That would be amazing. Did doing something like this like appeal more at this moment in time then going away to write another regular album?

Grasshopper: Yeah, and I think you learn a lot from getting inside those songs that somebody else has wrote already and rearranging them, still having their chord changes but building off some of the orchestrations they did and building around that framework. It’s like you’re rebuilding a Galaxie 500 Ford car or an old Stratocaster guitar or something and seeing how they put it all together. It influences how you write your own music.

musicOMH: You mentioned the shows you just did in the UK in December where you played acoustic versions of the songs from Deserter’s Songs. I saw you in London and I thought it was fantastic. Those songs never get any less incredible. So how was it to do those shows?

Grasshopper: It was amazing to do them like with Jonathan telling the stories. It was almost more powerful. A lot of those songs didn’t have drums on the record so when we play them live, they are pumped up so to play them stripped down and how they were originally was kind of emotional for us. You know, in London, I looked down and there was this guy standing in front of me, this big tough guy. When we were playing Holes these tears were just streaming down his face. It was incredibly moving, for us and the audience.

musicOMH: That’s amazing to hear. One of the songs that stood out for me was The Funny Bird. I was going to say it was such an amazing re-interpretation but I guess that’s the wrong word because you’re saying that that’s how the songs originally started out.

Grasshopper: I mean it was kind of both. It was the same with the Bobbie Gentry songs, reimagining them in that way. Doing The Delta Sweete Revisited record before we did these Deserter’s Songs shows helped us reinterpret those songs. I think it is all connected.

musicOMH: It was quite a nice surprise to see Sean O’Hagan come on stage for Checking In, Checking Out by The High Llamas. It reminded me that over the years I’ve seen you like play quite a few cover versions. Cortez The Killer by Neil Young, Solsbury Hill by Peter Gabriel, Here by Pavement. Do you think there’s any key to a great cover version?

Grasshopper: Yeah. I think it’s things that we have a connection to. Songs like Cortez The Killer are just right up our alley. With both Pavement and The High Llamas, we toured with them around the time of See You On The Other Side back in like 1996, 1997. I think those records were just on our minds when we were doing Deserter’s Songs.

musicOMH: So, finally what does the rest of the year hold for Mercury Rev?

Grasshopper: We’re playing the Big Ears festival in March in Knoxville and we’re writing new songs for a new record that will hopefully come out in 2020.

The Delta Sweete Revisited by Mercury Rev is out now on Bella Union. Tour dates and further information can be found here.