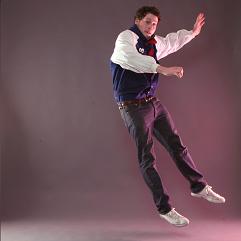 Metronomy was once a one-man band, the fruits of Joseph Mount’s creativity. Yet since the release of debut album Pip Paine: Pay The 5000 You Owe Me, the outfit has expanded three-fold, bringing on board Oscar Cash and Gabriel Stebbing.

Mount, however, retains artistic and songwriting control – though as he spoke to musicOMH, his prime concern was staying sane as he journeyed from one festival to another.

He enjoys the frantic experience, though is mindful of the need to pay his way. Or should that be cheekily mindful? “There are loads of festivals, and a lot of money to be made. Am I enjoying them? Yeah, it’s good, though I think it’s been really saturated this year. We’ve got to the point with some of them where the bailiffs are literally there when you’re doing the gig. It’s so naive to think festivals are a good way of making money. We’ve been lucky and haven’t yet fallen foul – even at ZOO8, where we got paid.”

We are talking in the aftermath of Metronomy’s latest single Holiday, released to cover a gap where the album might have been. “It’s a different slant on a title that you’d normally know what sort of music to expect”, Joseph explains. “I remember last year when Timbaland released Man Eater, and he also did Cry Me A River. It’s nicking song titles but making them sound different.” Returning to Holiday, he says “It’s weird that song – the label wanted a single so I did A Thing For Me, which was a cynical attempt at a single, then Holiday was another one and it was a bit like that. I never really thought about things like titles but I suppose I do quite a bit now.”

Metronomy’s reputation as a good live band goes before them, but I’m curious to know if they’ve altered their approach at all since a well received showing at the Reading Festival in 2007. “In honesty, no”, says Mount. “It’s progressed, I hope, but it’s like a machine. It’s hard to find the required amount of time to give something a revamp, but then again I’m not wanting to make excuses. After half a year doing stuff with the lights I thought it was having the wrong impact, but now we’ve fallen back in love with it all. You’ve got Daft Punk with the helmets, then Metronomy with the pound shots. It’s nice though that we’re making that something of a tradition!”

In a rather less obvious choice of venue, the band found themselves performing at the O2 recently as part of a night with the Junior Boys. “The reason it happened, The O2 wanna get people to go there,” says Mount. “It’s a really good venue; we were taken away by how good it was. It was actually one of our most enjoyable nights in London, but it was also like a crazy golf place. They could have a really good venue if people go there!”

Talk turns to influences, and with Mount hailing from Devon it only seems natural to reference Warp and relative neighbour Aphex Twin. He takes up the story. “When I first got a computer I was living in Devon and was lucky enough to have this girlfriend who was the only one listening to Warp acts, and so she got me into LFO, Matmos and Manitoba.”

He considers further. “I started off trying to make that kind of music and became technically good at that sort of thing, with snare rushes and all of that. Then when I moved to Brighton I had a bit of a realisation that a lot of electronica is so concerned with image, and is really elitist, so I thought fuck it. I like really simple stuff, and I’d been nicking these really complex beats! So I’ve enjoyed stuff that’s influenced me but now I’ve moved away from it.”

The first album hails from the west, however. “The title is taken from a car in Devon on the side of the road. It’s the sound of someone living in a musically redundant place trying to make exciting music.” He pauses. “I’ve got a feeling I might have burned my bridges with the electronica community actually. I had this track on a compilation and got it reviewed in the Wire, which, like, made my life really, but since then I’ve not really been asked to contribute anything like that.”

The current album has been pushed back several times, initially mooted for release earlier this year. “It was a combination of things really,” Joseph says. “It was half that they wanted a single and then March was blown out of the water. No one wants to release stuff in the summer, because everyone’s in a field and nowhere near a shop, so we ended up with September.”

“It’s the sound of someone living in a musically redundant place trying to make exciting music.”
– Metronomy’s Joseph Mount gives an honest appraisal of his first album.

Does he feel a weight of expectation with the release? “Yes I do, and it’s really nice there is. I think that’s come from the right people, and it’s not been hyped up so your mum and dad are expecting it. This album isn’t worse than the first album, and that’s a really positive thing, it’s definitely not a step back. If people are looking forward to it, that’s really good.”

He continues. “I think it’s a step forward, and I’m feeling relieved because of that. Now I’m just thinking about the next one. It’s still got legs beyond this. You’ll have to wait and see – I could be wrong – but I really enjoy getting into bands that have got a legacy. It’s what we strive for.”

Time’s up – and time for Mount to consider getting back on the road again. With a cheery flourish he departs, off to the next sound check.