Nick Cave: “If you’re involved with imagination and the creative process, it’s not difficult to believe in a god” – Interview 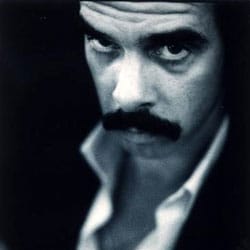 Nick Cave is entering his sixth decade, but judging by his prolific recent years, he has no intention of slowing down. 2007’s rollicking Grinderman project, plus a couple of soundtracks, has in 2008 been followed by a new Nick Cave & The Bad Seeds album, DIG!!! LAZARUS, DIG!!!

musicOMH caught up with Cave on promotional duties in Paris to chew over Biblical fables, work ethics, a second Grinderman record and being a rock icon at 50…

Cave is a few minutes late, having stepped out to buy some gifts from the trendy Parisian shop, Collette. When he finally arrives, he’s munching on the sandwich room service had delivered to his room. This unique cultural figure and a jack of all creative trades is impressive, somewhat intimidating, almost moody. There’s something of the carnival curiosity about him, especially dressed in black and with that moustache of his.

Right now, his creativity is concentrated into making a cup of tea. “Just a minute please,” he says politely, but curtly. Tentatively balancing the cuppa whilst simultaneously biting into his sandwich, he sinks into the sofa across from me. As he offers short answers to my early questions, it’s difficult not to feel intellectually inferior in his bewitching presence. Or is that a front he puts on, protecting himself from too much inquisition?

A prolific songwriter, poet, author, singer, screenwriter and occasional actor, Cave is a rare kind of creative force nowadays. Nick Cave & The Bad Seeds have just released their DIG!!! LAZARUS, DIG!!!, their 14th effort. It has universally been acclaimed as one of their very best and, once again, Cave is responsible for the lyrics. This one takes in biblical figures, Harry Houdini, Marilyn Monroe and a cast of mythical characters for good measure.

Lazarus is like a modern-day Biblical character that roams the streets of New York City and gradually transforms into an urban cowboy. Cave has once again drawn inspiration from the New Testament. “It’s difficult not to be influenced if you’ve read it, one way or another,” he says. “The Bible is obviously a hugely important book. It’s caused more unhappiness in the world than probably any other book. It’s got some of the most beautiful writing in it, some of the wildest stories, and to me, it’s got some very moving things as well.”

But don’t look for straightforward religious content or metaphors of his own beliefs. “It’s just a very powerful book and I’ve read it. So it’s had an influence over the way I write or even the way I see things, really. But I’ve never intended to make religious records or records that preach some kind of point of view.”

Yet his works, both previous and present, are greatly influenced by the Old and New Testaments. He could probably write – or be included in – a chapter. It would certainly be a very rocky one because Nick Cave is one heck of a roller coaster ride, with peaks and lows and mood swings.

“I don’t find inspiration to be particularly reliable,” he says, “so what I write comes out of sitting down and doing the work. It’s not really anything to do with inspiration in particular.” Inspiration is therefore hype, an overrated and misleading concept used by artists to explain the inexplicable.

“America’s responsible for some of the great, universal tragedies. But at the same time, culturally some of the most wonderful works have come out of it.” – Nick Cave

“I think a lot of people who aren’t artists like to believe that these people walk around and somehow receive these ideas from the ether. But it’s actually not like that. Anyone who’s actually involved in writing, whether it’s music or whatever, seriously knows that you have to get down and do the work. It’s about doing the work.” Work is a word and concept that often comes up. Anyone having any preconceived romanticised notions about the art of being an artist will be crushed to learn that, yes, it’s hard work.

Another influence (let’s refrain from employing the word inspiration) is America and the variety its non-geographical landscape provides. A very Wim Wenders sort of America. This comparison both surprises and pleases him. “Is it? Well, I guess it’s because it’s a very powerful country. It’s like the Bible: untold sadness is coming out of it. America’s responsible for some of the great, universal tragedies. But at the same time, culturally some of the most wonderful works have come out of it.”

And like all fortysomething non-Americans who grew up in the ’70s, the U S of A is one heck of an odyssey through the imagination. “I’m Australian. When I was growing up in Australia, all our influences came from America or from Europe. We didn’t really have our own culture. It was the indigenous culture. It didn’t really have, to me at least, a particularly interesting culture at that time. So I looked elsewhere. I looked at America and I looked at Europe, and I was hugely influenced by things from outside Australia. But I never saw it as a particular fascination with America. I was just fascinated with things that weren’t Australian.” But thanks to the likes of him and bands like INXS, Australia has forged its own cultural identity. “Maybe,” he says ever so modestly. “Great things come out of Australia.” Like Kylie Minogue.

DIG!!! LAZARUS, DIG!!! is one of Cave’s more accessible works, perhaps the most accessible since Where The Wild Roses Grow, his single with Kylie, opened him up to new audiences. “Not really, I mean it did, but they closed very quickly!” he laughs. “People heard that song, then they heard the rest of my songs. It didn’t make much difference, to be honest.”

But he admits that working with Kylie was the highlight of the whole project. “It was really something else to work with Kylie. I was a drop-down-on-your-knees fan! So it was very exciting to work with her. I’m trying to think of another female artist that I’d like to work with, I can’t, to be honest.” And a male? “There was a rumor that Snoop Dogg was going to do a version of No Pussy Blues (from the Grinderman record). That would’ve been good. He heard it and thought it was interesting.”

We can’t imagine Nick Cave listening to rap, but then again, we can. And while we don’t expect him to team up with Timbaland for a remix an ytime soon, it is fascinating to know what the four children of rock’s prince of darkness listen to, and especially, if he draws something from them. “I can say, ‘Yeah, they teach me a lot of things.’ They don’t teach me shit!” he laughs.

“My kids are seven and they’re hugely influenced by the world around them, so much so that one of my kids, Arthur, he’ll put on late Miles Davis and listen to that stuff primarily because he knows that’s the stuff I like to listen to. He kind of likes to listen to it, too. I don’t really think he has a deep appreciation of that music, but he likes it because he likes to be close to his father.” He concedes, however, that his tunes are not necessarily something his elder kids listen to. “They all have their own particular relationships with it. The twins, the little ones, they like it. But they’ll like anything.”

“I’ll just do what I like with my life. I don’t care what anyone says.” – Nick Cave

One of the few remaining true rock icons, Nick Cave has reached that milestone age – 50, an age that provokes ageist remarks, like “The The Rolling Stones should retire!” Cave laughs. “Maybe they should! I don’t think it’s anybody’s business what anybody does. Who’s to say? I’m really pleased that certain artists haven’t followed those suggestions because they’ve created great stuff in their later years: Johnny Cash, Leonard Cohen, Bob Dylan, Neil Young. Fifty didn’t make much difference to me at all. It seems to have made a lot of difference to everybody else!”

He isn’t too bothered by people’s fascination with middle-age. “I’ll just do what I like with mylife. I don’t care what anyone says. Sixty might be difficult! I still enjoy it. I really enjoy basically getting together with my band members, going in and making a record. I really enjoy that. I really enjoy doing live shows, so I’ll continue to do it.”

It seems logical that retirement is not an option for Cave, a hard worker reputed for never taking a vacation. “I’m the sort of person – and I don’t know why this is – who has a compulsive need to start a new project of some sort. It means the world to start this new record. And I’m very good at pursuing an idea and finishing it. I don’t get halfway through. I never have. I’m very single-minded about my pursuit of that idea. Once it’s finished, I have absolutely no more interest in it and I start the next thing. It’s always been like that, actually. But it seems to get more and more so. I’m not really sure why that is. I think it’s my star sign.” The last sentence shows a different Nick Cave, someone who may read horoscopes? He laughs at his own admission. “I can’t believe I said that!”

“If I’m forced to go on holiday, it takes me fucking weeks to recover.” – Nick Cave, workaholic

But he seems really into astrology. “I’m at the cusp of Virgo and Libra. Someone actually sent me something about what it was like to be born on the 22nd of September, what sort of character or person you were. That was the primary thing that they did, the people who were born on this day: start up new projects, follow them through and dump them.” A good trait to have, judging from the range of his work. He’s sceptical. “It’s actually good and not good. It’s good because I get a lot done, but I don’t have a huge emotional attachment to what I’ve already done. And in some ways, I wish I had more attachment to the project. Because an enormous amount of effort goes into something. And sacrifice.”

Sacrifice meaning a holiday break to recharge one’s batteries, a concept he’s oblivious to. “Some people need a little time to recharge their batteries and to fill up again. I hear all this stuff, that they’ve given everything and they need to fill up again. I don’t find that the creative spirit is something that you use and up. It’s not like that to me. It’s just a thing that’s there. It grows stronger the more you use it. If I go on holiday, for example – if I’m forced to go on holiday – it takes me fucking weeks to recover, to get back into finding out what I was supposed to do.”

Known as a man who weaves words beautifully together, expectations of another book or screenplay are high – and there are projects. “Yeah. But I’m not really going to talk about that. But I do want to write another book. I’ll do that when I’m 60! The next project will be the next Grinderman record. We haven’t recorded anything, but we have been talking about what kind of a record we want to make. That’s the main thing.”