Peggy Seeger: “Humans are a warlike species. The world is being run on a male dynamic” – Interview

The folk royal on new album First Farewell, the hell of mornings, classical influences and her ‘drop in the bucket’ theory 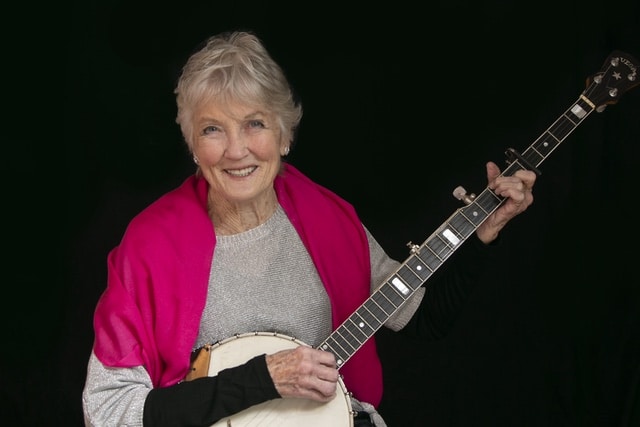 At 85 and still working, were she not the type generally seeking to dismantle established power structures, one might describe Peggy Seeger as folk music royalty. With a rich and varied musical heritage in her family (her father was musicologist Charles Seeger and her mother Ruth Porter Crawford was a composer and the first woman to receive a Guggenheim Fellowship), Peggy joined her brother Mike Seeger and half brother Pete Seeger in dedicating her life and work to the folk music tradition. She has lived in the UK for over 60 years, most famously working in a duo with Ewan MacColl (Seeger married MacColl in 1977 and they remained together until his death in 1989).

Seeger’s latest, and perhaps final, album is mischievously titled First Farewell. While, as one might expect, it deals with matters of ageing and mortality (albeit in a very playful way), the album also harks back to Seeger’s childhood and early musical development. “I top and tail the album, beginning when I was 11 years old and ending when I’m 100 years old,” Seeger explains. “The obsession with the passage of time, which I definitely have, is contained within these parameters.” The album’s closing track Gotta Get Home By Midnight, which Seeger describes as a “lightbulb song” and “great fun to play”, is a reverse Cinderella tale that finds her de-ageing over the course of a day. “It’s the truth!”, Seeger laughingly claims. “I feel like hell when I wake up and I get younger as the day goes on.”

In addition to this thematic journey, a number of the pieces have arrangements built around piano parts influenced by Seeger’s early classical training. “Piano dominated my life from six years old. I had my first lesson at six with my mother and she gave me a fantastic education,” Seeger explains. “At one point, I was practising three to four hours a day. I really loved classical music – Bach, Brahms, Chopin and Liszt. I became a very accomplished player. I was very good, but I wasn’t good enough. The arrangements on this album are definitely classically oriented. I really like investigating what the piano can do with a song.”

Seeger is keen to point out that she never uses piano on traditional songs, only on new original songs. Is that a matter of authenticity? “I heard the traditional songs with banjo and guitar, so that’s the way I did it,” she says in a matter of fact manner. “I wasn’t trying to copy, I just felt the piano would dominate. Also, you can’t travel around with a piano!”

One remarkable facet of the songs on First Farewell has also been a constant throughout Seeger’s career, and that is the sharpness of her phrasing and the clarity of her delivery. She emphasises that “melody and words are the tools of the trade” in her field of Anglo-American folk songs. “It’s about making sure the tune gets through and that the words are economically honed so there is nothing unnecessary. It’s a very carefully crafted poem with a melody attached.”

This approach can also be seen in Seeger’s work with Ewan MacColl. Seeger elaborates that “Ewan was a theatre person and one of the things we emphasised was pronunciation, along with placing the words where they would normally be if you were speaking the part.” This is something Seeger feels strongly. “I get very angry when I can’t understand the words of a song,” she complains. “Why have you hidden it behind all of this instrumental stuff? Why have you hidden it behind the drum beats?”

Given that Seeger remains such a clear and direct communicator, and someone for whom a life’s work of singing and activism might surely never be complete, can First Farewell really be a final album? “I think it probably will be the last,” Seeger says with a sense of realism, if not quite finality. “My voice is not what it used to be. I managed on this album, which was finished a year ago. The title First Farewell is a bit tongue in cheek – it’s based on what you do at an airport when you give the two goodbyes. There’s one when they go and you can’t follow, and another when they turn around and look back at you. So there’s a chance of a second goodbye if the person remembers to do it! But I think Covid is going to change the whole idea of how we have concerts and, after this, I’ll be too old.” 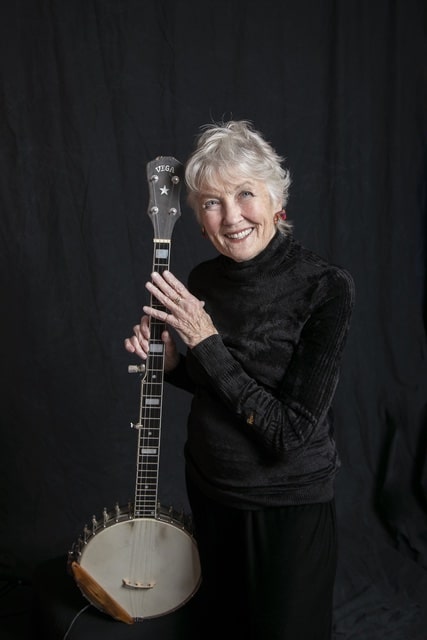 Even with this in mind, Seeger has some concerts planned with her son Calum MacColl (Seeger has been touring exclusively with her sons Calum and Neil MacColl since turning 80). If these events still have to be with a distanced audience, how will this work with a music that is so social in nature? “We will have to adapt,” Seeger admits. “I’m not sure it will be possible to get the audience singing along when they are six feet apart.”

“We’re not being supported by the money that is being given to the arts, and we’re losing a vital part of our society.” – Peggy Seeger

In other ways, she has proved adept at adapting to the nature of the modern world. One of the songs on First Farewell (We Are Here) may gently parody how our social media use leaves us disconnected from each other in the physical present, but Seeger has embraced the possibilities offered by the digital realm with a regular Sunday afternoon programme on YouTube. During these shows, Seeger tells stories, explains the origins of certain songs and performs. Most recently, the shows have been themed around songs from the new album. “It’s all self-serving, really,” Seeger half-jokingly admits. “It’s to keep me going!”

Yet a few moments of further reflection find that she is aware of a broader purpose: “A lot of us musicians are realising that the public needs us as entertainers, so we’re trying to keep doing our bit, and we’re adapting. Human beings are an extraordinary, resilient species and very good at adapting to catastrophe. I can’t imagine what it must be like in lockdown for people in small accommodation with a couple of kids.” With both children and grandchildren in precarious freelance roles in music and media, Seeger understands the impact of lockdown on younger people. “We’re not being supported by the money that is being given to the arts,” she protests, “and we’re losing a vital part of our society. I’m just here doing my little bit”.

Seeger has spent an entire career with an unflinching faith in the power of song to affect change in society. Does it get more difficult to sustain that over time? How has this been incorporated within the musings on the passing of time within First Farewell? “What I’ve tried to do on this album is to correlate one idea with another – a small idea with a big one,” she explains. “For instance, in the song Lubrication, people will start listening to that with great interest, and then it turns out to be a song about something huge in the world – tectonic plates. In How I Long For Peace, I correlate war and the destruction of the Earth’s systems.” The latter song offers a clear elucidation of Seeger’s world view. While some might seek to accuse it of naivety, Seeger is clear that we can no longer afford to continue on the same path. In Seeger’s view, we need to connect the loss of the Amazon and the damage caused by plastics with “the fact that human beings are a warlike species” and that “the world is being run on a male dynamic”.

“Human beings are an extraordinary, resilient species and very good at adapting to catastrophe.” – Peggy Seeger

She goes on to suggest that while “we are supposed to be intelligent, this is what our animal persona is. If you look at the wars, who does the torturing, who walks into a kindergarten with an assault rifle – they are all men, or boys. It’s so rarely that a woman does these things. This is a man thing and it is time that the story was told. We know it is not all men, but even in nice men there’s this aggressive or competitive streak – their car has to go faster, their building has to be higher, they have to win. Why is our education system so competitive? It is very damaging.” Seeger is at her most committed and animated when finding connections between problems in the world and the nature of patriarchy, yet she is aware that women can use similar tools to respond: “We can put laburnum in the stew,” she says with purpose.

One of the songs on the album, The Invisible Woman, addresses patriarchy from a more personal perspective. Interestingly, the idea initially came from Seeger’s son Neil. “He feels invisible as a man of 61, mostly to younger women. He broached the subject and I said, ‘Try being a woman of 85 and see how invisible you are!’. In some ways it’s a great position to be in because people don’t see you, but you can see them – it’s like being a ghost.” Seeger then goes on to explain other ways in which this can unfortunately be welcome. “I am happy to be invisible in a society in which I’ve been felt up, held against a wall, flashed at a number of times,” she says, emphasising just one of many ways in which this set of songs are both timeless and rooted in our current moment.

It is particularly interesting that Seeger sees her attempt to tell a story about patriarchy as ongoing. Many of the issues we are discussing now are depressingly similar to those raised in one of her most well known songs, I’m Gonna Be An Engineer. “Well I have to do it,” she says, “but until now it has been fairly gentle. You have to tell it in little integers, so that men and women can listen without feeling that they are being attacked. Men can get very defensive without even thinking – they have to retaliate.”

Seeger revived a 1960s song in one of her YouTube broadcasts recently, Hey Ho! Cook and Rowe, a song relating the St Pancras rent strikes of 1960 lead by Don Cook and Arthur Rowe. In describing the context for the song, Seeger stated that, although the specific battle at the time was lost, it “opened the door” for consideration of tenants’ rights issues more generally. Is this one of the ways in which Seeger remains optimistic? “I call it the ‘drop in the bucket’ theory,” she says. “Every drop fills the bucket more and then eventually it will pour over.” If First Farewell really is to be a final recording, we will need to hope that there are others who can continue the story.

Peggy Seeger’s First Farewell is out now through Red Grape. She plays London’s Cecil Sharp House on 27 May 2021. Tickets to attend the socially distanced event in person are sold out, but livestream tickets are available here. Further tour dates and information can be found at peggyseeger.com