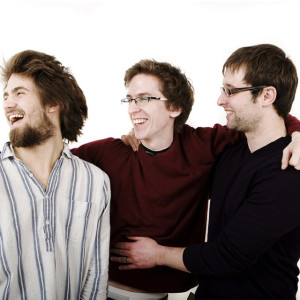 With this year’s London Jazz Festival already in full swing, one of the highlights of the event is still to come. Powerhouse trio Troyka combine with an electrifying big band under the direction of Royal Academy of Music Head of Jazz Nick Smart to form Troyk-estra, “the ‘bionic arm’ that expands their visceral mash-up of rock, improv and dance music into a mutated jazz big band of the future”.

The result, which comes to the Purcell Room on 23 November, is a compelling expansion of the trio’s music from their first two albums with textural guitar loops, abstract electronica, dance derived beats, and big band brass in the mix.

The core trio – Chris Montague (guitar), Kit Downes (piano) and Josh Blackmore (drums) – swelled their ranks as part of a commission to perform at feted London jazz club Ronnie Scott’s. The big band went on to perform at the Cheltenham Festival this year, recording a live album along the way.

After we rehearsed for a few days we immediately realised that the project had a life after the gig at Ronnies. We heard how good all the students were and how quickly they ate up the music and how interested in the project they were and we knew we would have to do it again afterwards. We are happy to have this new album out – but we realise that this project will probably never be a regular touring entity, so come to the Purcell Room gig – as it might be a while until the next one!

As a trio, the interplay in Troyka gets pretty seamless and can switch from brutal to delicate very quickly. Does working with a big band feel more liberating in its big canvas or more restrictive in maintaining a balanced sound?

Both I think – we worked very hard in the rehearsals to make the entire big band feel like one enormous engine – a massive rhythm section, so this enables both more colour and interesting structures, but also the groove and sensibility of a small group. The players are all very flexible and great soloists in their own right – this allows us to write for specific people, knowing that they understand the goals of the band.

You’re playing the London Jazz Festival. What can jazz fans expect you to do that might take them out of their comfort zone?

I guess it’s not a conventional big band album – in terms of the sounds and the writing – but at the same time, it’s all relative isn’t it? One person’s comfort zone is another’s nightmare! We are pleased with the end result, as to our ears it sounds quite unique – and has all the character of our own small-band music but on a larger scale.

Following hot on the heels of last year’s new Troyka album Moxxy, this year has also seen some impressive boundary-pushing albums from British groups such as Sons Of Kemet and Empirical (to name but two). Do you think British jazz is leading the world in its risk-taking and lessons learned from its strong improv scene?

It’s an exciting scene for all sorts of reasons I think – in every corner of the music there is something to be inspired by. Someone who is a huge inspiration for us and for this album is composer and pianist Django Bates. I think we all think of improvising as a way of arriving at an end result – a tool – so we can take inspiration from all types of music, whether it has improv in it or not. I love Albert King, Kit loves Olivier Messiaen and Josh loves John Bonham – so I don’t think it matters where you get the inspiration from. We all feel that it’s important not to be too nationalistic about this, as we are inspired from lots of different places and lots of different periods – saying that, there (and has been for a long time) exciting music coming out of the UK for sure.

Pick a few of the most scintillating gigs at this year’s London Jazz Festival.

We are all playing every night I think so we don’t really know everything that’s going on, but saying that, I know Medeski Martin and Wood are playing at Ronnies, and they are one of our favourite bands. Mark Lockhart’s Ellington band is also great.

You mentioned an interest in playing alongside singers – specifically Björk. What do you think you could bring to her musical party?

Her party is pretty slamming already, I think! John Tavener – who recently died – once did an amazing collaboration with Björk and he remarked on how her voice is incredibly primal, something rare in modern music. Hopefully we’d be able to bring something of that energy too, and perhaps some of the improv things we do in Troyka.

When Troyk-estra hits the stage, how much of the material is already written and how much is free for the players to decide on the day?

Again, I think one particular (but important) process isn’t necessarily more important than the global end result. Improv is a great way to facilitate freedom and freshness, but it is perfectly possible to find those things within the written music of course. So the balance is always changing from tune to tune, bar to bar. There is as much written music as our normal trio set, but people feel free to add or take away according to their overall well-informed perspective of the music.

If you could magically acquire the skills of any other guitar player overnight, who would it be and why?

That’s the toughest question so far. There are many piano players that I’d like to sound like first, Oscar Peterson and there are tons of things I learn from playing with Kit (they have 10 fingers and I can only use four at a time!) In terms of guitar players I would love to be able to communicate as directly as Bill Frisell or Albert King, using less to say more. On the other hand, I love a player called Shawn Lane who died about 10 years ago. He had the most searing technique I’ve ever heard.

What would you say to get folks to part with their hard-earned cash and come to your London Jazz Festival gig?

We earned ours harder! And I promise them this will be the best gig they’ve seen in years.