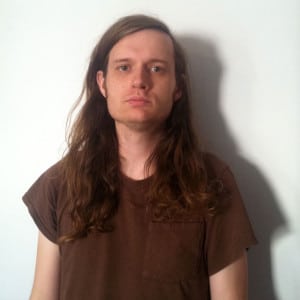 First his band MMOSS broke up. Then his heart got broken. Welcome to the world of Doug Tuttle.

The young East Coast musician recorded his self-titled debut album over six months as a response to his heartbreak, mending things back together with his spellbinding use of psychedelic pop melodies, some low-key singing and a shedload of monster guitar jams.

With the album due out this month through Trouble in Mind, the singer/songwriter tells us about why he made the album and admits an unhealthy obsession with The Byrds and Neil Young…

After the demise of MMOSS, you’ve wasted no time in making a superb new solo album. Has the ability to call all of the shots made a big difference in your music-making? Does it feel liberating? Or daunting?

It’s liberating for sure. I’m always working on something, and when I was in a proper band I felt like anything I recorded on my own was for demo purposes only. Now I have the option of actually using the recordings I make.

You turned heads when you showed off the six-minute Turn This Love as the sneak peek into your album. Featuring a flawless three-minute guitar solo, it’s a bold move as a ‘single’. What made you chose this song?

I let Bill and Lisa from Trouble in Mind decide what song would go out first, I trust their opinions 100% and really didn’t have one of my own on the subject.

Were you working on the album’s songs over days/months/years? Did you write and record them all since MMOSS folded? Or have they been a labour of love for some time?

I started writing “Where You Plant Your Love…is Where it Grows” as a MMOSS song, but it never stuck. All the others were written for this record. I started writing/recording February 2013, and finished around August.

Your new Trouble in Mind labelmate Morgan Delt has something in common with you as you both ply a very good trade in psychedelic rock. But both of you are fairly young. What attracts you to sweet retro haze of trippy jams and motorik grooves?

Hard to say, these are the kind of tunes that were on classic rock radio when I was a kid in the ’80s, they’ve stuck with me. I just like sad, slightly unhinged pop songs.

When it comes to writing those big infectious melodies, is there a musician (or musicians) that you have taken inspiration from? And that combination of tight hook and cosmic jam sit very comfortably together – how much time does it take to get the tunes to gel like that?

Most of these songs were written as I recorded them, I’d just keep trying things till it worked and move on. As far as people I’m into it’s all over the place and I tend to pick up little bits and pieces from lots of things, in a lot of cases things I don’t really listen to too often. I pretty much only listen to The Byrds and Neil Young.

I Won’t Do – it sounds like a love song. Or a love song gone very wrong! It’s hard to tell. But do I hear a touch of bitterness mixed in amongst the embossed flower on the front cover and the dreamy jams?

Oh yeah, there isn’t an entirely positive song on the album… It’s a breakup record for sure.

Where did you record the album? Who produced it? And what part of the recording process did you find the most difficult? And what about the easiest?

I recorded the record in a space shared by some of my friends in Cambridge, Massachusetts, on a Tascam 388. I wouldn’t say it was hard in any way, I was in a pretty bad place and needed something to fill my days, so I just recorded as much as I could. When I had 20 or so songs I picked the ones I liked best and that was that.

How many guitars did you use to make the album? Do you have a favourite guitar?

I have two Telecaster type guitars I built from parts, one six-string, one 12. I used an acoustic 12-string and an Epiphone Casino that were at the spot I recorded, and a ’70s Japanese copy of a Gibson EB-2 for all the bass stuff. My favorite guitar is my six-string Telecaster.

Where do you go now? On tour? Looking for another band to join? Or will you continue to play as a solo act and record more albums?

I’ve been playing live a bit with a band, Justin from MMOSS is playing bass, Jesse from Apollo Sunshine is playing organ, and Noah and Spenser from Creaturos are playing drums and acoustic guitar. We’ll be touring soon, and I’m sure I’ll be recording more before long.

Doug Tuttle’s self-titled solo album on Trouble in Mind is out on 27 January 2014. More at his Facebook page.