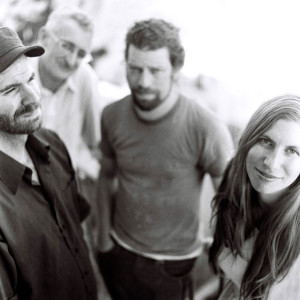 Tours in 2011 and 2012 brought Esmerine to Istanbul, where the group’s enthusiastic reception led to an invitation for an artist residency in the city. Dalmak is the fruit of that visit: the majority of the album was recorded there, where the band’s four Canadian musicians were joined by an equal number of Turkish guest players: Hakan Vreskala, Baran Aşık, Ali Kazim Akdağ and James Hakan Dedeoğlu on various instruments.

Dalmak is a Turkish verb with many connotations: to contemplate, to be absorbed in, to dive into, to bathe in, to rush into, to plummet. As a title for Esmerine’s new album, ‘dalmak’ refers in a literal sense to immersion in the culture and music of Istanbul but also appropriately evokes the range of the music which shifts between meditative pulsing and enveloping restraint to headlong flights into rhythm and groove.

With Dalmak, Esmerine presents some of its most richly minimal and intimate, while still ornate and explosive. Marimba, cello, drums, tenor banjo, bass and trumpet are joined by bendir, darbuka, erbane, meh, barama, saz and electric guitar from the local players for these centerpiece tracks, where extended melodic themes are passed around and woven through staccato grooves and polyrhythmic vamps. More studied cello and marimba songs Learning To Crawl and White Pine reveal the album’s saturated warmth and pulsing grit.

Finish this sentence: I started playing the cello because…

I was enamoured with the grade 4 students in my elementary school that were playing the cello, so I asked my dad if I could take part in the string program in my school and learn the cello. He said just play the violin it is so much smaller – but I had no interest in the violin….so I managed to convince him to get me a cello. And I have been playing ever since. I never would have picked up the instrument if it wasn’t for that string program in my elementary school as neither of my parents come from a musical background.

As a member of Esmerine, you recently travelled to Turkey to record your new album Dalmak. This opportunity to take up a residency in the country came about due to the strong reception the band enjoyed in Istanbul during your 2011-2 tour – is that correct? Who suggested the idea?

Our European booker Steven had moved to Istanbul and got us a show at the Salon, a lovely venue in the heart of the city. Everyone in the band was so excited to have the chance to play in Istanbul, and we absolutely fell in love with the city – that trip inspired us to go back and compose and record our next record, Dalmak. The stars must have been aligned, as we really had no idea how to make this happen logistically. We ended up renting a loft in Istanbul and turned it into a recording studio. We could not find a marimba to save our lives, but somehow it all came together and we met the most amazing musicians who are touring with us now. The music evolved very organically, I think because we just really enjoy playing together and were (and continue to be) musically challenged in the best way possible. The whole experience really has been a true pleasure from beginning to end.

How did you make the leap to touring band of foreigners to recruiting local musicians and establishing the careful balance that exists on Dalmak between marimba, cello, drums, tenor banjo, bass and trumpet with the bendir, darbuka, erbane, meh, barama, saz and electric guitar?

We were very fortunate to meet incredible musicians in istanbul including Hakan Vreskala and James Dedeoglu who inspired us to record this record, and were very fundamental to the making of the record. They also introduced us to other turkish musicians who contributed to the record. We really wanted to be able to recreate the record live, and therefore it only made sense to tour with our new friends as well. We really push each other in fun ways on tour to play the best we can…it is a real treat.

Whose cello playing keeps you awake at night in wonder? And who’s writing for the cello gets you reaching for your bow?

I absolutely adore Julia Kent and Pablo Casals. And am a lover of bach and brahms -The Cello Sonata No. 1 in E minor, Op. 38, actually entitled “Sonate für Klavier und Violoncello” is one of my favorites.

The controlled explosion midway through Lost River Blues II sees a bit of old-fashioned jamming and soloing take place, lifting the veil on the carefully controlled soundworld you had created in the first section of Dalmak. What’s better – the release or the build-up?

Perhaps the combination of both make for a more interesting record. We really wanted to create a musical journey for the listener, giving people a chance to absorb not only the sounds of the different instruments being explored but the interplay between them. But what was most important for us was to create a unique language or world between the musicians, that felt honest and true to our experience.

What can audiences expect from your expanded line-up when it comes to the Dalmak songs being played live? Are you going for note-for-note recreation of the songs on the album or are you letting the tunes roam free?

So this is a very exciting tour for us as the Dalmak band – as the instrumentation is so unique and it has been a blast for us to play this music live. Truly a highlight in my music career. The music being performed is actually for the most part pretty close to the record, but we have a lot of fun on stage and every night is different. There are solos as improv that occur every night so we never know what is going to come out of us. The audiences also affect the music, when it is a really fun audience, it makes us pretty hyper!

As a yoga instructor and a political activist, what did you think about the recent yoga demo in protest of the Turkish government’s plans to bulldoze Istanbul’s Gezi park?

There has been yoga protests throughout the spring and summer, we’ve seen pictures of it on the internet – and it is a wonderful non-violent mindful way to express opposition to that project.