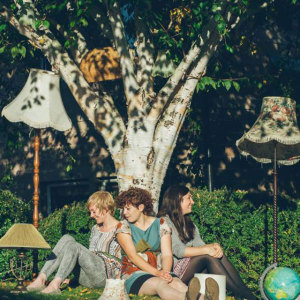 When the Derbyshire Dales-based trio released their debut album, Tricolore, in March 2013, we were instantly smitten with Haiku Salut. An instrumental rush of accordion, fluttering piano – and any number of additional instruments – it’s a beautifully intricate record; one of those albums that you find something new in every time. Translating such a labour intensive piece of work on the live stage should prove tough, but it’s their live ‘lamp shows’ that really bring out the beauty of Haiku Salut.

A series of vintage lamps are scattered across the stage, weaving in and out of their myriad of instruments, and through some sort of wizardry, they fizz and flick on and off in time to the music. The result is stunning.

With their second album nearing completion and a lamp show mini-tour in the offing, we caught up with the band to find out what we can expect this time around.

We’re really excited that you’re touring the lamp show again. Where did the idea for it come from?

We always hoped to incorporate something visual alongside the ordinary show and had toyed with the idea of using lights on stage but these things were always mentioned in passing because nobody had a clue how to make it happen. Then a couple of years ago Sophie and Gemma went to see Dan Deacon who, amongst an amazing live show, controls strips of coloured disco lights using his midi setup. We spoke to him afterwards and got a vague explanation that was unfortunately lost to a very beery night in Manchester. It inspired us to look into the various equipment and knowledge we needed and after a few failed attempts we eventually asked our friend and clever person Robbie at Snug Recording Studio to help us wire up some lamps to the electronics. And voila!

Tricolore was brilliantly received – were you nervous about releasing an instrumental album and how did you feel about the response?

We were really chuffed with the response! We weren’t nervous at all about releasing an instrumental album. We all enjoy a lot of different types of music, I suppose it’s always seemed immaterial.

Tell us about the new album; what can we expect…and did I hear some vocals at your Camden show?

We’re actually in the studio right now answering these questions and we’ve literally just finished the first draft of the new album! Yay! We’re all really excited and pleased with the songs. The tracks came together really quickly, without any waffle and overall I think it’s quite urgent. It’s electronica with accordion and accelerated glockenspiel of course, it’s quite dramatic in part and yes there is singing in places. With the EP and Tricolore we wrote all the parts and then invited guests to appear on some of the songs – A Little Orchestra played on Train Tracks For Wheezy, for example – whereas for the new one we’ve done everything ourselves. We’re better at being Haiku Salut now.

You play an incredible number of instruments – how do you learn so many?

Our array of instruments has slowly been multiplying since Haiku Salut first started – we definitely started out with less! We’ll have written a song for example and thought that a certain instrument would suit it – then we’d go ahead and learn the instrument. We are by no means experts in them all though, we just learn them as we go along and fit them in to the context of the band. All our instruments have names, they’re called ‘Wheezy and the gang’, Wheezy being one of the originals; a Reed Organ that is sadly no longer with us. We’ve pretty much reached our limit of instruments now though (…we can’t fit any more in the van).

I’m intrigued as to how you write…how does it all come together?

This should be a simple thing to talk about but once a song is finished we feel quite removed from it. Often one of us will have an idea for a song or a melody or ambience away from the group which we’ll bring to the others and we’ll talk about where it should go from there. Sometimes we’ll get to the next practice and entire songs are finished in a burst of inspiration alone and others evolve and take shape as we practice them. Sounds Like There’s A Pacman Crunching Away At Your Heart took months for us to realise where it was supposed to go but You Dance a Particular Algorithm from the new album appeared really quickly.

What with the lamps, and the countless instruments, it must get confusing on stage. Has anything ever gone wrong?

Of course! There’s so much that could go wrong in our live sets as there’s a lot of instrument changes and we tend to make things as complicated as we can for ourselves. Sometimes we can work with our mistakes, even embrace them! We usually have to write instructions on our set-lists with prompts of settings that need changing, mics that need moving and delays that need changing etc. With the lamps, we’ve had some scary moments where things haven’t been working… but it’s generally turned out fine in the end!

I know you count French and Japanese film as influences – which films would you love to have soundtracked?

Anything by Sylvain Chomet! We love how his films focus on people and the relationships they build from an upside down and back to front perspective, and it’s done in such a comic but melancholic way. They’re bloody lovely.

What would be your dream lamp show venue?

We love doing the lamp show in interesting and old places where the lights illuminate all the nooks and crannies. We’re doing it in a Victorian swimming baths in Manchester, that’s got us all excited! A library would be dreamy!

I hear you have a book coming out soon. Tell us about that…

Yes! It’s a book of haikus we’ve written on tour. It all came about because our friend Tim Clare is a (fantastic) poet and we saw on Twitter that he was doing a challenge of writing 100 poems in a day. We’d written haikus on tour in the past and were on tour at the time so we decided to also give it a go. We were stopping in a beautiful fisherman’s cottage on the Kent coast for a couple of nights so there was lots of inspiration there. It was after this we thought that releasing them in a collection would be a nice thing to do so we looked back through old notebooks and googledrives and picked out our favourites. Our friend Katrine Brosnan (responsible for the Tricolore artwork) has illustrated the book which is due for release in November but there will be copies at the lamp shows.