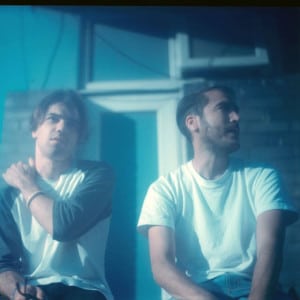 Dropping it last year on Marathon Artists, the album channels the ghosts of The Beatles and The Byrds as they contort them into a heady stew of supple psychedelic electronic rock. Howlin’ remains a valuable lesson in how to make good music fun. And fun music good.

Now London residents, they are touring South America and set to return to the UK in May. Ahead of that, and a remix package of new single Uncertainty featuring new cuts from Cut Copy, Ewan Pearson and others, and before they jumped on a plane to Bogota, we caught up with the guys and found out what makes them purr…

You’ve just played the 6 Music Festival in Manchester, sharing Stage 2 with Nick Mulvey and Wild Beasts. How did it go down? Did you find any new musical favourites? And how was the crowd?

GAB: We had a really great show. I’d never seen Lykke Li perform live before, that was cool.

JONO: Yeah, we heard Lykke Li soundchecking and that was pretty sweet. The night before we had a curry at this place recommended to us by Mike Joyce. They were playing some awesome north Indian sitar jams.

From Jaguar Paw, to Jaguar Ma, to Jagwar Ma – you’ve always kept a bit of the killer feline groove to your music – attractive yet lethal if fucked with. Gloomy, but looking good, as you might say. Where did you get this swagger?

G: I don’t know. An eagle doesn’t ask how it can fly no less than why.

J: I’m surprised you know of the old aliases. I think part of the swagger comes from our loose-fitting fathers. Gab’s dad is Persian and my dad is Chinese and both are as insane as each other much to Gab’s and my relief. It was embarrassing as a child, but now I think having weird dads helps the music stay interesting.

In our review of Howlin’ last summer we wrote: “It is brimming with the confidence of a vastly more experienced band.” How did you arrive at such a solid sound and coherent approach to recording the album?

G: I guess because we had other musical ventures prior to Jagwar Ma, the experience we had from those went into the making of Howlin’. But there is so much more to learn.

J: Well to be fair this isn’t the first recording Gab or myself have made. In fact prior to this album I’d cut my teeth as a producer on many bands in Sydney as well as many remixes under various aliases and I’d also worked on a bunch of film scores. So the studio is like my home. Similarly, Gab was in a band playing at nightclubs in Sydney at the tender age of 15, so I guess you could say we both had pretty solid training before this.

When it comes to playing live, how do you adjust the songs on Howlin’ from sounding great in the studio to sounding great on stage? And do you have any secret tricks to mess with the crowd and make them lose their minds?

G: If I told you they wouldn’t secret any more would they? The songs become more alive. Instead of listening and seeing us on a screen, we’re standing there making the music. Much like in Fantasia, when Mickey wakes up the broom and pail and they dance around.

J: We like to approach the live show as a completely separate entity. We are playing the same songs but we like to grime them up and draw them out. It’s as much about keeping it interesting for ourselves as it is about keeping it exciting for the audience. We do have a little trick actually. It’s called the Trouw effect. We went to this nightclub in Amsterdam where they play deeeeeeeeep minimal techno. The lights were super simple and would only start to fill the room when the kick dropped out. Kinda like driving along a highway towards a semi-trailer in the distance. The white light slowly approaches, getting brighter and brighter and then when the beat drops, the truck passes and the whole room is engulfed in darkness again. People would go nuts in this club and we like to simulate that feeling at moments in the set.

As an Australian band, do you get sick of people saying your music sounds ‘sunny’? And while the lame Antipodean clichés are being wheeled out, have you ever written a song related to any aspect of Neighbours?

G: No and no. Watching Neighbours? I would rather sleep in a bed of scorpions.

J: HA! Funnily enough, people seem to bring up the Manchester sounding thing more than the Australian sounding thing. I think we accept that it’s all just part of how we, as listeners, like to understand and catalogue music in our minds. I don’t think I’ve ever seen a full episode of Neighbours. I think it was more popular in the UK than it was in Australia.

You’re about to jet off on your first tour of South America. And you’ve got a slot at Primavera this summer in Porto with the likes of Caetano Veloso and Television. How would you describe the past year of your lives as a band? And where will you go from here – back to the studio? Back home to Australia for a kip? Or back out on the road for some more touring?

G: The last year has presented a myriad of new experiences and meeting heroes. When we’re sat still we live London. So that’s different. I wonder if journos will start asking if I watch Eastenders? Anyway, we’ll be trying to juggle everything. Recording, touring, living and maybe if we have time we can go home and say hi to my mum and brother.

J: The past year has been like a strange dream where we’ve been growing but also retreating in some respects. Gab always talks about this idea of ‘retrogression’. I think I’ve seen a lot of retrogression amongst our band in the past year which is quite funny at times. From here I think we will continue to retrogress and until we are back in the studio, like newly-born babies making techno.

One of the more amusing comments about Howlin’ on Amazon is: “Your mates will know you are cool when you pop this little beast on the iPod. Attractive women will want to know who it is.” Agree? Disagree?

G: Ahh… Eh? That’s kind of more what they say about movie stars. ‘Men want to be him, Women want to be with him’ etc. I’ll leave it at that.

J: I think that misses the point of the album somewhat, and is slightly at odds with why we make music. But sure, whatever tickles one’s fancy!

You stuck the brilliant leftfield techno dance track Four smack bang in the middle of Howlin’ to suggest that you have much more to their repertoire than ‘sunny’ psychedelic indie guitar grooves. Do you want to follow this more electronic vibe in your next release? Or would you describe it more as an experiment?

G: People will often try to pigeon-hole bands as best they can. Most of them I’m fine with. But ‘indie guitar’ is just so wrong. Writing Four was an important statement of difference. But to suggest that the record was completely meditated nor entirely spur of the moment would be polarising something that has so many different shades of uncertainty. It’s a tedious excercise sometimes trying to extract a definite answer of things that just are simply not so black and white. Maybe that’s where the confidence of feeling gloomy comes from because I’d rather be in the murky shadows making things that make it hard for people to predict. Anyway, I’m rambling, feel free to edit at will.

J: I think what I like about Four being where it is, is that it shows the dynamic range of our music. I’d like to continue that for the next release and try not to get stuck in one dimension.

When it came to recording Howlin’, we hear you holed up in a secluded town in the north of France, with just an 808, a Fender jaguar (naturally), a laptop and a pair of vintage Neve console channels. How long did recording take and how would you describe your diet during the process?

G: We actually started forming some of the songs in Australia prior to our trip to France. But yes, the diet was rich. As was the company and the environment. I really enjoyed it. There is so much fear in beauty and vice versa. I know that is something that a lot of writers like to explore. The house we stayed in was surrounded by a forest. It was beautiful and sinister at the same time. By the time we were ready to leave (it had been about seven months of isolation) we were changed men. My personal relationships had all but disappeared in Australia. I had a beard which had cheese from days before and I didn’t care. Because we had a bunch of songs that we knew told a very honest story about the formation of the band and who we were going in to making it – and who we became coming out.

J: Well, we sort of record and write simultaneously so it’s hard to define a starting point and an ending point. There was lots of shit talking with wine glasses in hand inbetween studio hours, of course. Our diet consisted mostly of haricot jaune, a snappy little yellow bean. One night we a guest there made us falafel and we all got sick, I never recovered from it and it almost killed me – I almost died with a falafel in my hand.

J: Beatles. You don’t seriously need me to explain why, do you?

Jagwar Ma’s album Howlin’ is out now through Marathon Artists. A remix package of the new single Uncertainty with remixes from Cut Copy, Ewan Pearson and others is out 7 April. Jagwar Ma tour the UK in May. More here.