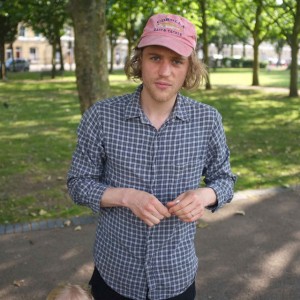 Actor, folk singer and new-ish dad Johnny Flynn has had a busy few years. Returning to his roots in the theatre, filming with Kristen Stewart and looking after his son haven’t stopped him recording his third album, Country Mile. Just before he sets off on tour with his band The Sussex Wit, we caught up with him to find out exactly how many jobs he has…

Is Country Mile a concept album?

It falls somewhere on the spectrum. The album title is also the first song, and I chose it to draw attention to the idea of a journey. You could argue that almost every song ever written is about a journey of some sort, either emotional or a literal story of going somewhere. That concept loosely ties all of these songs together, but I only realised towards the end of producing it, and these songs were written and recorded over a really long period of time.

Were you travelling during that period or was it a subject subconsciously interesting you?

I’d been interested in the idea of going on really long walks, setting out with no agenda, aiming for a place where your mind is at ease and being absorbed by the mystery and the wonder of the place around you. I grew up in the country and I’ve always been obsessed with the idea of wilderness. While I was recording the first album, A Larum, I was really interested in Henry David Thoreau, who gave away a lot of his possessions and lived in a hut in the woods. In George Orwell’s Down And Out In Paris And London, he joined a group of vagrants and wrote about being on the road, travelling light and seeing what happens.

And recently I’ve become even more preoccupied with it. Robert MacFarlane’s latest book, The Old Ways, is about walking along an old path that has been trodden down over thousands of years by different people. He looks at how much of our subconscious is unlocked by the action of treading one foot down in front of the other. When we surrender to the land, in a way pilgrims have done all over the planet for centuries, we discover something about ourselves and our environment that is not accessible in everyday life, going about our everyday routines.

Literature is obviously very important to you. Do you write fiction?

I wrote a really bad play once. I was part of a young writers course at the Royal Court Theatre. But I think about writing a novel almost every day. I have ideas in a very slow cooker at the back of my head, but I’m wary of thinking I can write a novel, of whether I have the skills. It’s different holding a narrative over 300 pages than during a three minute song. But I often want my songs to feel like reading a novel, to have that feeling that something has changed by the end. I’d love to be a novelist; maybe one day I’ll pluck up the guts.

Do you think music and literature operate in different spheres of your brain?

Writing and listening to music come from different places in your brain. When I listen to music, the rhythms and melodies affect me on a subconscious, emotional level. Writing music uses your heart, but you need to rely on what you understand about the mathematics of music. That’s very exciting as well, but it’s more theoretical: if I add an A sharp 7th here, how does that make me feel? How can I change the texture by using a different instrument?

Writing prose can be more heart-led, because you’re not constrained to verse patterns or rules about syllables.

So why did the album take so long to record?

My wife and I had a son in early 2011. It was at the end of touring our second record, Been Listening, and I didn’t want to go back out on the road. I also missed theatre – I went to drama school and at one point in my life, that was what I wanted to do. I got some nice theatre jobs in London that meant I could be at home during the day while my wife was working, so we could be a tag team for a couple of years.

I was recording and writing in between, whenever there was a day. Previously, we’d take six weeks to record and mix a whole record, with the entire band there all day, but we couldn’t do that now; we’re too hand-to-mouth with time.

I rented a broom cupboard recording studio near my house and would record on my own or with Adam [Beach, bass player The Sussex Wit] and the record is a result of three years spent chipping away at it. This process would normally result in the demos, but in this case they became the songs – we just carried on adding instruments. We had this phrase: ‘demo with intent’.

Is it ready for live shows?

The band got together and rehearsed for five or six days just before the Gentlemen Of The Road Stopover festival, our first show in over two years – we had a baptism of fire that weekend.

It’s Mumford And Sons‘ festival – they take over a town for a day. They had the Mystery Jets, The Vaccines, Edward Sharpe And The Magnetic Zeros. The next day we did a festival called the Larmer Tree, a nice hippy festival in the west country.

Was it all testing ground for the new material? Is it odd playing material that the crowd won’t know?

I have a policy to never play two new songs in a row. But it went well, I was really pleased. We’d only had a few days’ rehearsal and we were winging it. Then we had another two week break and played at Green Man, with no rehearsal time. I was in Wales with my family, then drove to the Brecon Beacons, met the band and went on for a mainstage set. But we’ve always done that. We don’t play that often. Too many of my friends come off tour and never want to see a guitar again, but I’m always in that state that I can’t wait to go and play.

You’re playing with the Mumford And Sons again soon?

We’re doing four shows with them in the Deep South in America, starting in New Orleans which is cool because I’ve never been there. But we’re driving ourselves so we’ll basically be onstage or driving. As a small band, its a big expense for us flying there. We’ve then got two days to drive to New York where we then play a headline show and we get to hang out there a little bit.

Mumford And Sons have always been really sweet to us. Their very first tour was supporting us. We played to literally one person in Slough. It was the night of the Champions League final and everyone wanted to leave and watch the football so we said to this one guy, come on, but he was adamant that he’d paid his £7.50 and he wanted to see a gig. It’s quite funny to see where they’ve gone, from there to taking over the world like Roman centurions.

We will probably never play our own headline show in front of 15,000 people in the south of America, so it’s an amazing way for us to be able to afford to go there and hopefully introduce our music to some new people.

What’s next after that?

We’re touring in Europe and the UK in the Autumn and I’ve got a small part in a film called Sils Maria in Olivier Assayas’s first English language film. This one has Juliette Binoche, Kristen Stewart and Chloë Grace Moretz in it so it’s pretty exciting.

How many different jobs do you have?

Well, two main jobs. It suits me as I have a low boredom threshold. But of course I’m realising now that my main job is being a dad. That’s the most important thing I can do.

Johnny Flynn’s album Country Mile is released through Transgressive on 30 September. First single The Lady Is Risen is available as a free download with pre-orders of the album. More at johnny-flynn.com