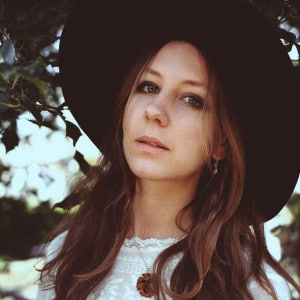 You may have heard of Lyla Foy, before – you may have even heard some of her music, albeit under the WALL moniker she has previously recorded under. Now recording as Lyla Foy (strangely), her debut album Mirrors The Sky was released earlier this year through Sub Pop – and as she tells us, they weren’t the only label interested in adding her to their roster.

Mirrors The Sky itself combines both elegance, power and frailty sometimes within the bounds of one song – and it leaves a huge impression on the listener, whichever end of the musical spectrum they come to the project from. From the artwork to the songs themselves, the album is as enchanting as it is heart-wrenching, owing to Foy’s masterly songcraft and unique vocal talents.

A few days shy of her appearance on musicOMH’s stage at The Great Escape, we asked her some questions and, kindly, she answered them. Look out for her this week – you’ll be glad you did.

There have been so many comparisons put out there about your music, are there any in particular that you’re happy with? I imagine being compared to Kate Bush is a good thing?

Kate Bush is a special artist so I’m happy to be compared to her. I don’t think I’m anywhere near as interesting though – I just write simple pop songs, Kate is some kind of genius.

On your record, was there any track that was a complete nightmare or did they come relatively easily? I know sometimes artists spend ages perfecting one tune whereas others just record themselves.

The only issue came when I tried to re-record certain tracks. So all the recordings on ‘Mirrors..’ are made up of bits of the first demos. I worked on the mixes for the record and touched stuff up but all the vocal takes are from the day that I wrote the song.

How’s the feedback been for your record so far? Has anything surprised you about the reaction to the record or has it been pretty much what you expected?

I don’t tend to keep up with what people are saying but I do know that it’s being bought.

This is the first record you’ve released under your own name right? Was that an easy decision to make or did you have to consider it?

I did consider it, of course, but I tried not to over think it. The music is more important that the name to me.

What was it like working with Sub Pop? Did you have much involvement with those guys or did they let you get on with things?

We talk things through at every stage but they trust my vision and I have free reign. I could only really work with that set-up which is the main reason I chose Sub Pop.

Do you have a favourite record from the Sub Pop back catalogue?

The Postal Service – Give Up

How did the label find you, was it a certain tape or gig?

The first thing they heard was my Karen Dalton cover, and then we hung out at SXSW a few months later.

What are some of the albums that have influenced your personal musical development? Are there any secret musical crushes you have that you’d like to own up to?

Is there a particular vibe you want to get your listeners into when they listen to your music or do you just prefer to let them attach their own meaning to it?

I think it’s good for driving or flying as it’s a calm record – good for pondering.

Are there any other artists out there you’re particularly interested in? If not, we can recommend Broken Twin and Marissa Nadler…

Yes I like both of those artists, and I’m looking forward to seeing Broken Twin at The Great Escape this week. I’m also into Kiran Leonard and PINS right now.

What plans have you got in terms of live dates – are you doing many festivals this summer or big gigs you fancy plugging?

Koko on June 5 with Sharon Van Etten will be great, and we have some more dates we’re announcing at the end of the week. We’re doing some nice festivals in the UK and around Europe. I’m most looking forward to playing the Sub Pop stage at OFF Festival in Poland, and Best Kept Secret in The Netherlands and of course, End of the Road in Dorset!

What was your favourite live date you’ve played so far?

We’ve played twice in Paris, both times at the same venue – Le Trabendo, which is a pretty perfect gig.

Finally, who did your album artwork? It’s fantastic.

Micah Lidberg, I’ve been a fan of his for a few years so it was exciting to work with him.

Lyla Foy plays musicOMH’s stage at The Great Escape, at the Unitarian Church in Brighton, on 9 May 2014. The album Mirrors The Sky is out now through Sub Pop. More at her site here.