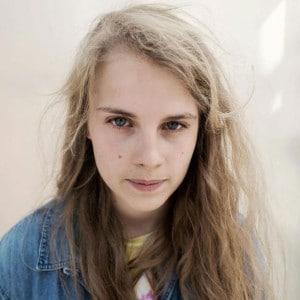 We first saw Marika Hackman in September last year, at her single launch party at the then new Servant Jazz Quarters. We instantly fell for her dark, Nico-ish voice and equally off-kilter subject matter. Tales of rotting flesh, covers of Joanna Newsom tracks… this wasn’t your typical nu-folk wannabe.

A compelling live act, she’s strictly no frills; despite her model looks, she prefers to take to the stage in jeans, armed with just her guitar. Her offerings have been tantalisingly few to date; she released a mini album, That Iron Taste, at the start of the year, but we’re still waiting for her first full length LP.

Your mini album That Iron Taste was well received. Why no full length album yet?

Honestly, it’s because I haven’t been ready. I’ve only been doing this for a couple of years and I needed to have time to explore my sound. I needed to go out and play songs over and over again to empty rooms, and tour with artists I love and work with different producers, otherwise I think my debut record would sound fairly immature and confused, even. One of my main gripes with the music industry today is that artists feel an immense amount of pressure to release music early on. What’s the rush? I’m only 21, I’ve got time to wait until I’m ready.

You’re often likened to Nico and Joanna Newsom. Who influences you?

Joanna Newsom has been an influence for sure; Have One On Me is such an incredible album. In fact, on my latest EP there is a cover of her song ’81 because I love it so much. Laura Veirs actually made me want to start writing songs when I was about 14. I was listening to The Shins a lot around then as well. They both write these songs which appear simple but actually the chord progressions are quite unusual, so it’s like this fuzzy top layer that hooks you in because it doesn’t seem too challenging but there’s this totally unique undercurrent pulling the whole thing along. Of course I grew up listening to Joni Mitchell and Simon and Garfunkel and all of those incredible songwriters who my parents loved. It will have all gone in at some point.

Your songs can be quite challenging in their subject matter – where do you find the inspiration for your lyrics?

I have no idea, which is quite terrifying. I have always been drawn to art and literature with dark content. I also like a bit of humour too, I love it when both sides are mixed. I’ve read a lot of Sylvia Plath and Roald Dahl’s short stories as well. I always prefer a sad song to a happy one, so I guess anything that you appreciate artistically you are going to want to emulate.

Which song by another artist do you wish you’d written?

The Lark Ascending by Vaughan Williams. It is the most heartbreakingly beautiful piece of music and it makes me feel homesick for England even when I’m deep in the heart of the Devon countryside.

You’ve had a lot of praise heaped on you very early on in your career. How does that affect your work?

I like to relieve myself of pressure by remembering that at some point in my career I’m going to do something that someone won’t like. In fact I imagine I already have. So I’m constantly reminding myself that as long as I’m happy with my music then it’s fine. I want to explore so many aspects of my music and make records which go somewhere different each time, so I can’t get caught up in trying to people please.

You seem to shun the aesthetics of pop – is that a conscious decision?

I don’t think so. I’ve never liked any of that sickly sweet pop music with pounding choruses and completely predictable chord progressions. It’s so mundane, and has never appealed to me on an emotional level. Everything is so contrived and fake. When people come to my shows they will see me in the clothes that I have been wearing all day, with no make up on, standing there playing songs that I have written sitting on my bed at home. I’ve spent hours crafting and perfecting these songs so why would I want to distract from them? That’s like an artist displaying a painting on a wall which has been smothered in bright pink and orange wallpaper; give me a grey wall any day.

You’re a very lyrical artist. How do you write your songs?

I don’t think there’s anything particularly unique about it, I just spend a lot of time in my room playing my guitar and occasionally chord progressions or little motifs will jump out at me. Once I’ve got a few of those in my brain I’ll start stringing them together and working out melodies, which seems to be either a very speedy process or mind numbingly slow. It’s very similar for the lyrics as well; I have to be singing something when I’m writing a melody so for a while it will just be gibberish, but again certain bits will stick out and I’ll take those and mould them into sentences. I never sit down and decide to write a song about anything in particular, I think it’s more about getting all of the clutter out of my head.

I will be recording and releasing my debut album and probably touring a lot too. I hope to have a band playing with me as well which I find an exciting prospect.

Marika Hackman tours the UK from 10-14 December 2013, including a stop at London’s Lexington on 11 December. The mini-album That Iron Taste is out now through Dirty Hit, and a debut album proper is expected in 2014. More about Marika Hackman can be found here.