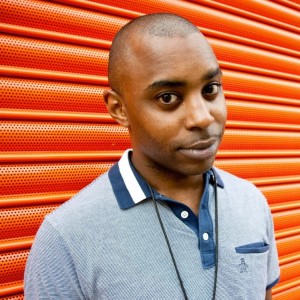 Backed with a bevy of praise from pretty much every publication you care to name, it’s hard to envision a world where Random Impulse – aka East Londoner Jovel Walker – doesn’t end up making some kind of impact. And the music matches the ambition – a fierce, energetic blend of rap and rock that has seen him being described as “Jimi Hendrix on a grime ting”.

A dab hand in the studio, the previous few years have seen him working with the whole gamut of British urban stars including Wretch 32, Tinie Tempah, Professor Green and Wiley. And with new single Overload set for imminent release, we caught up with Random Impulse to quiz him on the story so far…

musicOMH: Back in September last year, On A Roll was added to the Radio 1 Introducing playlist – was that a big moment for you?

Random Impulse: Definitely. It’s really hard trying to get your music out there and radio’s probably the biggest way of doing that. I’m really lucky to have some of the DJs on Radio 1 behind me and really supporting what I do.

OMH: Early on in your career you recorded two mixtapes in your bedroom – do you think there’s a real value in that proper do-it-yourself approach, where there’s no complications; just you and the music?

RI: For me, it’s not just valuable, it’s essential. I’m still in that same room actually! I laid down the drums, guitars, synths, vocals… everything by myself, in my home set up for my album, then re-recorded it in a professional studio to improve the quality. But everything has to start by myself locked away in that little room.

OMH: We first remember reading about you on the Guardian’s ‘New band of the day’ column back in October 2011 – can it be frustrating that it’s taken so long since then for things to properly start ‘happening’ in terms of major single releases?

RI: Yes and no. I’ve been making music for ages, but I’ve only started playing instruments these last three years, so in a way it was quite quick. Recording an album professionally takes a while too, so there’s only so frustrated you can get with your head down working constantly. That said, I’ve been itching to get out there and I’m really excited to finally be at the stage of releasing a record.

OMH: You played a heap of festival dates over the summer – V, Hackney, Bestival – was it always important to you that your music really translated well to a live environment?

RI: Without a doubt! My primary instrument’s an electric guitar, and I always play it then performing live; along-side my backing band consisting of a drummer, bass player and addition guitarist. With that kind of set up the live circuit is vital. It’s where the songs come alive. I think it’s important for the audience to see that I actually play as well, and I’m not just a rapper that gets his backing track made for him. Not that there’s anything wrong with that, mind you! It’s just not me.

OMH: You’ve engineered tracks for Tinie Tempah, Wretch 32 and Wiley – do you think it’s benefitted you being confident in the more technical aspects of working in the studio? Many other up and coming artists have to rely on others to help them on this front.

RI: Having someone else write the music is the norm in rap and grime, and there’s nothing wrong with that, their talent’s all about the writing and the lyrics. But I definitely wanted to express things musically as well as lyrically, and engineering others definitely helped.

OMH: We hear you worked with Guy Chambers on a number of tracks – how did that all turn out, and will we get to hear them on your album?

RI: I met Guy in L.A, he heard my stuff and to my surprise he was really keen to work with me, as was I of course! He’s like a legend! We wrote some songs together and I think they were really cool, but not something I’ll present to the world as songs for me to perform. Hopefully we’ll find the right person to give the songs to though. I still chat to Guy, I call him Uncle G, ha!

OMH: A lot of the praise around you focuses on the ‘punk’ feel of your tracks – do you think there’s still room for that feel of rebellion in modern music?

RI: Ha, I wouldn’t have called my music ‘punk’ or rebellious at all, but I can see where they’re coming from. My songs are quite upbeat and they’re also hard hitting, but they’re essentially stories about things that are so every-day and specific, that no one’s really written about them. I think that’s why people that might not necessarily listen to indie or hip hop tend to gravitate to my songs. Does that make me a rebel? If it does then if there’s no room for rebellion in modern music you can bet your life I’ll die trying to carve some out, ha!

OMH: A lot of people have combined rock and rap influences in the past – what would you say is your unique spin on the combination of the two?

RI: I think probably the main difference with my music is that everything comes from just me: the rapping, the melodic choruses and the music are all made by myself. I think it’s a lot harder to produce music of different influences that’s seamless and fluid if you’re not actively involved in the making of each aspect that you’re pulling from each genre. You have to have a genuine love for each genre you incorporate and really be a part of it, and understand it. You can just be a rapper and jump in front of a rock band, then be like ‘yeah! We’re mixing genres!’ To be honest, I didn’t really think I was mixing genres, I just thought I was rapping with an instrument.

OMH: If you could change one thing about the current musical climate in Britain right now, what would it be?

RI: Nothing! I think the beautiful thing about music is that it only gets big if the people want it. Sure, what the labels choose to sign and put out can sway things a bit, but if people didn’t like it people wouldn’t buy it. The charts nowadays are literally bursting with raw talent like Jake Bugg, Dot Rotten, Adele, Ed Sheeran, Two Door Cinema Club… I could go on for ages. The only thing I’d slightly tweak is for me to be really stuck in it – but I’m working on that, hopefully it works!

Random Impulse releases his new single Overload on 25 February 2013, with a headline show at Cargo following on 28 February.