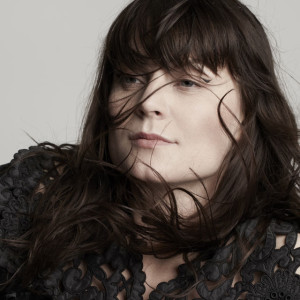 The year is yet young. But in the first few weeks of 2014, the Norwegian-born musician Rebekka Karijord released Music For Film And Theatre, the understated title for a stunner of an album, a seemingly perfect listen for the incessantly mopey rain that has been so prevalent in the new year. And it’s rounded out by a dark, evocative portrait of Rebekka, painted as she played live at London’s Union Chapel last July.

We tracked down Rebekka to ask her about the album, just how she gets the balance right between time, space and timbre spread across the 15 tracks which all stem from unrelated projects, studios, musicians and themes, and about the UK’s current obsession with all things Nordic…

You’ve managed to combine the delicacy of your instruments with the power of your voice – and get the recording spot on for both, as well, which is no mean feat. How did you start singing and playing instruments? What are your some of your earliest musical memories?

Thanks! I was drawn to music very early. My dad was a musician and my mother and grandmother are huge storytellers, full of traditional songs and stories. I started to sing quite early and played violin and piano. I believe I recorded my first demos when I was eight, and then later got a band to experiment with. Then, as a teenager, I got really into studio engineering and the technical aspects of music. I think that has helped me in capturing my sound.

The 15 tracks on Music For Film And Theatre were written and recorded over six years with a vast number of musicians for a host of different projects. Were you surprised how well they hung together as an album when you sequenced them?

The selection work took me quite some time, actually, since there was so much material to choose from. A lot of the work was not very homogenous sonically, as it was recorded in different rooms for example, so I ended up choosing pieces that fit together in feeling and instrumentation. However, I realised that even though it’s mostly instrumental songs, they still seem to sound like me in a way – and I think that was the most important criteria for when I sequenced them, as they felt personal and could independently talking to the listener on some level, without the originally attached picture, movement or word.

Last year, you performed at Union Chapel in London as part of the venue’s Organ Project making use of the chapel’s newly restored 19th-century Henry Willis organ. What did you think?

It was super amazing. I’ve dreamed of playing in Union Chapel for a long time. And to have that huge, warm organ sound in my back while singing… it was pure pleasure!

Have you received formal musical training – either in playing instruments, composing or both? If so, how do you think it affects you when you write more-pop oriented songs (such as Use My Body While it’s Still Young)?

Yes, I was trained to play the violin and the piano as a child. And in my early twenties I have had an extensive music and vocal education. That knowledge is in my spine, like a foundation. But I think any artist’s sound is just as much shaped by their heritage, environment, life etc. Learning and observing, then breaking free from those rules and finding yourself, is the key.

A song like Madrigal on Music For Film And Theatre reminds me of Laurie Anderson in terms of the way you’ve treated the vocals. Elsewhere, the album’s amazing use of space in the sound recalls Brian Eno for me. Who do you feel influenced you over the years on those tunes?

Both Laurie Anderson and Brian Eno have served as huge inspirations to me. I think I’m drawn to musicians and composers who dare to pull the pop formula into art music. Who’s not afraid of that simplicity? There is a sense of intuition and physicality in, for example, Eno’s work that really speaks to me. Madrigal, and also Morula, are examples of something I’ve been experimenting with for years as I try and find a meeting point, or the perfect balance between analogue and digital, within the use of the human voice.

The key to a good soundtrack is that conveys whatever is going on in the film/theatrical work – but do you think soundtracks should also be able to stand alone as piece of music to be enjoyed without the context of the film? If so, can you think of any examples where this works?

No, not necessarily. I think a good soundtrack should underline and strengthen the emotional thread in the story. It can be a single note, repeated for minutes, with the right sound or interval, and it works perfectly with the scene but would probably be quite uninteresting by itself. However, I do really appreciate when composers for films dare to take up space and challenge listeners – such as Jonny Greenwood’s soundtrack for There Will Be Blood or work by Gustavo Santaolalla, such as what he wrote for Biutiful. I listen to those pieces all the time, and they create new images in my head.

The UK is currently in the grips of a Nordic Fever – we seem to be loving TV shows such as The Killing, The Bridge, Borgen etc. As someone who was born in Norway and has lived in Sweden, do you think they accurately reflect some of the moods and discussions in the population of these countries?

I’m not a huge TV watcher, so I’m maybe not the best person to answer this question! But I’ve have seen a bit of The Bridge. I think some films and series in Scandinavia as well as some of the music, captures a melancholy, maybe created through our mythology and the dark, long winters. You know, it’s not a new gloominess. It was there when Edvard Munch painted his paintings, or Henrik Ibsen wrote his plays – and there’s strength in that melancholy, in a way. Maybe that’s what is appealing to you guys.

Any plans for a new album? If so, any details you can share with us? And when will you return to the UK to play live again?

Yes, I’m writing on the next chapter of We Become Ourselves, which will focus on the female voice. I’m doing extensive research where I’m collecting unique, female voices. I don’t have too much to say about it yet, but it’s a really inspiring process. And I’m not touring so much, right now. Last year was an intense year of touring, so I feel the urge to go into my studio and hibernate and create now. It’s always like that – it’s a constant pendulum between the big and the small sides of my musical life, the outside and the inside. Right now I’m on the inside. But I always turn outwards after awhile…

Rebekka Karijord’s Music For Film And Theatre is out now through Control Freak Kitten. More about her can be found at rebekkakarijord.com