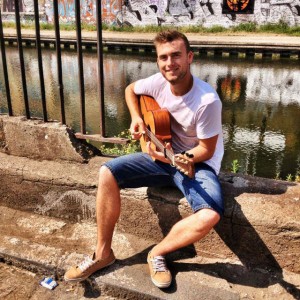 Singer-songwriter Ryan Keen has been slowly building a solid fan-base through relentless touring and quietly self-releasing inventive, lyrical folk music for some years now. He played on musicOMH’s stage at The Great Escape in Brighton earlier this year.

In the run up to the release of his debut album release Room For Light, which is set to tilt him further towards mainstream success, we caught up with him to chat dodgy gigs, audible breathing and famous friends…

musicOMH: How would you describe your debut album?

Ryan Keen: I write with my heart on my sleeve, it’s therapeutic for me. Sound-wise, it’s a mix of singer-songwriter folk stuff and blues, but larger on production than my earlier stuff. When I’m happy, I tend to be out surfing or in the park with friends, so it’s when I’m down that I write songs – but there’s always an optimistic slant. The album title is a lyric: ‘a darker place has more room for light’.

OMH: There’s an intimacy to it which sounds like you’re in the room singing it to me; I can hear you breathing…

RK: That was something we really worked on, me and my producer Dan Parry. All This Time, one album track, was recorded at three at the morning and I was feeling pretty low. You can hear me sigh in the middle of the song and we decided to leave that in – because it’s real. We left it all in, breathing and scratchy guitar sounds, because I like that stuff.

OMH: Your percussive guitar sound is interesting; I find myself trying to visualise how you’ve achieved the sound.

RK: I’ve been working on that for seven or eight years. Percussive finger style guitar is another challenge to make come across in the studio. It doesn’t always record that well so we had to try different techniques. It makes more sense when people see it live.

OMH: Does it feel strange to unveil such autobiographical material on the world?

RK: Yeah it does, each song feels very personal so it is weird [Ryan was inspired to start playing live after the death of a friend]. The idea that people I don’t know know something about me is weird, but that’s what you do as an artist: put something out and let the public read whatever they want into it.

OMH: How’s the new material going down at the summer festivals?

RK: Really good. People are showing up and singing the words to songs I wrote in my bedroom a few years ago [Ryan’s first EP, Aiming For The Sun, came out in 2010], so that’s crazy. People respond well to the new songs too. Festivals are good fun; I’ve got Lodestar coming up in Cambridge [weekend of 30 August 2013] and Totnes festival in Devon coming up [23 August until 1 September 2013].

OMH: Do you get a chance to see any of the bands on the bill with you?

RK: Sometimes. At Boardmasters, I saw Nina Nesbitt, Everything Everything, The Vaccines and Benga. I was on the mainstage and there was a backstage area where we could hang out and watch each other play which was cool.

OMH: You started out playing tiny gigs and self-releasing your EP. Did it feel like you cultivated your career in your own time?

RK: There was no record label so I was writing, recording and gigging a lot, trying to get out there as much as possible. I’m not too great with the whole social networking thing; I prefer doing things live and meeting people. I’ve had complete creative control but doing it yourself means there’s zero budget: I was sofa surfing and completely broke.

RK: In the start I’d gig anywhere that would have me. There was a night in Camden with a totally random bill. I was on late between two heavy rock bands and a big fight kicked off five minutes before the end of the previous set. During my set there was an ambulance and police coming in, bottles flying around. So I’ve experienced some tough crowds. I suffered from stage fright when I started, but I’ve done 260 gigs in 14 months so I’m used to it now.

OMH: But you’ve also supported Leona Lewis at the Royal Albert Hall – what’s it like playing for someone else’s audience in such a venue?

RK: It’s an amazing opportunity. When there’s a crowd there to see me, it’s a very different vibe than a big crowd there for a big artist, but it’s a chance to get some new people to hear my music. To play at the Albert Hall is a total milestone. It’s such an iconic, beautiful place and the acoustics are incredible. The walk from the dressing room to the stage is plastered in photos of everyone who’s played there and that was massively terrifying: Adele, Emeli Sandé, Eric Clapton, BB King, Slash, John Mayer. Legendary.

RK: Coldplay and Muse, then some hip hop, like J Cole and Jay-Z – his new album is massive. Folk-wise I’d have Sam Brookes, who is phenomenal. There’s a lot of really cool singers coming through at the moment: Jacob Banks, Laura Mvula. I don’t want to namedrop too much but I’m lucky enough to call some pretty amazing people friends and I’d want them along, so the likes of Ed Sheeran and Newton Faulkner. They’d have to be there.

OMH: So what’s next?

RK: Touring all over the UK in October. In December I’m touring Ireland and then there’s plans for an international tour early next year – then back in time for festival season!

OMH: Do you still play guitar for fun?

RK: All the time. I’m always jamming or messing about with stuff, writing for other artists or doing top lines over things. I need music every single day.

OMH: What’s the most unlikely song in your repertoire?

RK: Yesterday it would have been a Rudimental cover, then today it was a Lana Del Rey song. But I like playing Rihanna songs. I guess that’s pretty weird.

Ryan Keen’s album Room For Light is released through Lookout Mountain on 23 September 2013. First single Old Scars is out now.