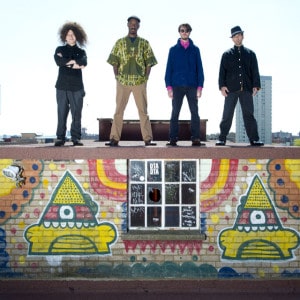 Ever picked a fight with a big piece of metal and two feisty drummers? Spare a thought for Shabaka Hutchings. As the founder of freeform jazz band Sons Of Kemet, the London-born clarinet/alto saxophone player has teamed up with the sonic heavyweights of Oren Marshall (tuba) and Seb Rochford and Tom Skinner (drums) to forge a truly impressive album called Burn.

From the opening track, All Will Surely Burn, things get off to a scorching start with Oren’s tuba taking the lead and Shabaka’s menacing alto marauding in the background to the stately tropical march of both drummers. It sets a searing pace that does not let up over 10 fierce tracks, wrapping up with a powerful take on the reggae torchsong Rivers of Babylon.

With Shabaka and Seb having already worked together in Polar Bear over the years, their credentials hardly need restating. But quietly, this out-there supergroup is making a name for itself, alongside labelmates Empirical, as the leaders of the new school of jazz. Inspired by the psychedelic turns of Sun Ra Arkestra and field music from the West Indies in equal parts, the quartet add extra menace through Rochford’s spacey production work and a desire to never stay still.

Ahead of their London Jazz Festival date at the Barbican, where they will support Brad Mehldau and Mark Guiliana, we caught up with the classically trained musician and former Tomorrow’s Warrior member Shabaka to ask just how the group got their groove on…

Does that type of intense but simultaneously laidback vibe of the Sons of Kemet come naturally to the group or did it take a lot of rehearsing?
It takes a lot of work – but not in the sense that we need to chug away at it until it is right. For me, if the groove isn’t sounding or feeling right, then it’s not going to improve with more practice. We know it when we’ve got it. I wanted to get away from the idea of ‘simple’ and ‘complex’ in terms of melodies. Whether the influence was from the West Indies or a New Orleans jazz band, I really tried to make a consistent album with a theme rather than making a jazz album where the tunes are just vehicles for longer improvisation.

How long did it take to find Oren, Seb and Tom?
I play with all of them in various combinations all of the time. I played with Seb for ages in Polar Bear. I’ve played with Tom’s own group. And I’ve done a lot of free improvising with Oren. So it was just a matter of thinking – what do I want? And who are the guys that can deliver? 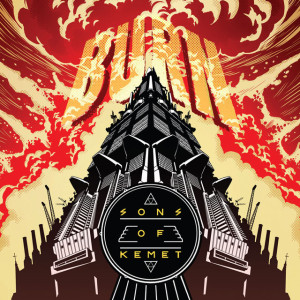 A real sense of freeness and improvisation abounds over the course of Burn. Do those ideas come from jamming? Or is much of it written in your charts?
I like to have a basic chart to think in terms of the composition. Because I did a classical degree for the clarinet – I’ve done lots of heavy written things. So I don’t feel like have to prove how written a song needs to be. It’s out of my system! So there is a composition but not that it’s been classically composed. So I give the guys basic charts and tell them the basic areas they are going to go. But they are all composers themselves! So there’s no point me writing inhibiting parts for them. It’s not that type of group. In terms of jamming, we jam a lot. But we don’t jam to see what happens – we jam because we want nothing to happen. It’s different. I trust them – which is important. It takes the pressure of me as the horn player because I can step up and do a fire and brimstone improvisation. Or not. If not, one of the guys will always be doing something. I really like that environment where if the sax player doesn’t take it to the rousing finale that is OK. That’s a kind of freedom in that – and it means that all of us have an equal say in where the tune goes – or doesn’t go.

Happy to leave the chart open and they can solo how they like?
Everyone’s a musician in the band and they have to make their choices. Things have to be really notated or left quite open. If it’s someone’s grand vision it needs to be there. Like when I did the orchestral pieces with Sons Of Kemet and the BBC Concert Orchestra it was the opposite of how we normally operate as there was a proper orchestral score and they had their directions. But generally I trust their musical choices and I respect what they want to do in the moment.

Talking about the reliance on the horn player in the band – that puts you in the hot seat quite a bit, does it not?
Oh yeah. There’s a certain physical element in the band. You don’t get it as much on the album but when we play live there is the sense of the raw physicality of it all as I’m playing up against two drum kits and a very large piece of metal. And I think that affects the sound more than anything – the fact that it’s a physical strain for me just to get heard! I can see why McCoy Tyner quit Coltrane’s band when he added a second drummer.

Can you describe the difference between the band on record and the band on stage?
When we play live, we play as hard as possible! We’ve been thinking about that a lot recently. And it’s always surprising how hard it is physically. And that’s something I like as a sax player because it feels like I can’t blow hard enough. I really love it. It seems like a stigma of music that you can only play quietly and tastefully if you are an accomplished musician. But I also think it’s important to do the opposite as well. I never practice more than reasonably quietly because I live in London and my neighbours don’t want to listen to me all of the time. But when it comes to playing onstage it is really important to have the experience of playing to the physical limit.

When did you start playing the clarinet?
That’s the instrument I was given when I started playing music in Barbados. My family moved there when I was six before moving back to England when I was 16. I think it was because the clarinet is such a cheap instrument it seemed like the schools had loads of clarinets. So we had a school band with like, 15 clarinets. And all I wanted to play was the sax!

Where does the name Sons Of Kemet come from?
Kemet is the word used to describe ancient Egypt. And at the time I was writing the music I was reading a lot into its history. My name comes from King Shabaka (about 716-702 BC) who was the last Nubian king to rule Egypt, so he wrote all of the spiritual stuff on a big stone called the Shabaka Stone. So scholars in the ’70s started studying the Shabaka Stone and formed kineticism. Philosophy and spirituality – it interested my parents and that’s why they named me Shabaka. And they now come to the gigs!

The album took more than year to make. Why so long?
Because I got Seb to do it and he’s really busy! But I was adamant that he had to do it because he’s just got the production sound that I wanted. And even though someone else mixed it he essentially produced it. It doesn’t sound like an electronic album but it has a lot of odd details that influence the overall sonic feel. I gave him a list of sound examples of what I wanted and explained the kind of liberties I wanted him to take. Like some Afrobeat records – some early Fela Kuti albums, especially – where you get the sense there is a mic in the room and you can hear everything but because it’s all balanced acoustically you don’t feel like you are getting a totally clear drum sound or sax sound. You’re getting a good polished field recording instead! Even the first Polar Bear album Dim Lit was a good example which was a good dead room sound – and I like the idea of ancient meeting modern. Like a really dry sound like you’re in the room but then you hear electronics in the mix, something that shouldn’t really be there. He put a lot of white noise around the album – mixed really low. On the first track he’s got this really low white noise throughout the track. You don’t notice at first but you can hear it when everything is coming down at the end which creates a kind of tension. It sounds full and tense, adding an expansive feel to the music.

What’s next for Sons Of Kemet?
We’ve been playing gigs and we all enjoy it. But we’ve all got different projects on the go as well. That’s the reality of being a musician in London – you can’t actually survive only having one band if you’re playing creative music.

Sons Of Kemet‘s album Burn is out now through Naim Jazz. As part of the 2013 London Jazz Festival they play the Barbican as support to Brad Mehldau and Mark Guiliana (Mehliana – info here) on 21 November 2013.