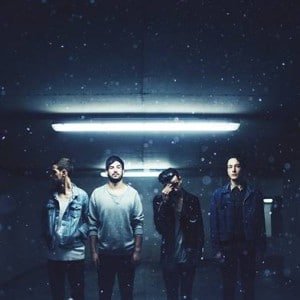 Whilst the likes of fellow debutants Palma Violets and Peace have been garnering effusive praise wherever they go, Manchester outfit The 1975 have been carefully picking out their own route to success, becoming firm radio favourites in the process.

A cursory listen to their previous EPs, Facedown and Sex, makes it easy to see why; the four-piece have a striking knack for putting together bite-size, wonderfully instant pop melodies. New EP Music For Cars – and in particular current single Chocolate – sees them at their glossiest to date. It’s surely another firm step forward on the route to mainstream success.

We caught up with lead singer Matthew Healy, quizzing him on the band’s sound and just where he feels The 1975 fit in amongst their peers…

musicOMH: When you started picking up a lot of airplay, how did it feel? A validation of everything you’d been doing and that it had all been worth it?

Matthew Healy: It was a big surprise, that’s for sure. We never really had any intention of being embraced by such a massive institution as Radio 1, when we put The City out we assumed it would just circulate online in the same way a lot of people’s music does nowadays. But as soon as we released it, it was being championed by Huw Stephens and Zane Lowe. I think what happened is that those plays – and the support we felt from people we really respected – catalysed a real progression in our understanding of what we were doing and what we wanted to do from then on. It made us really get our shit together.

OMH: You’re signed to indie label Dirty Hit, who’ve only been going since 2009. Has there been a lot of encouragement from them in terms of you making the transition into a potentially big mainstream success?

MH: Yes and no. The label is run by our manager and best friend Jamie Oborne; he’s really nurtured us as a band since we met. We’ve always believed we had the potential to do big things with this band, it was just important for us to do it our own way and not to rush anything. At no point have our label ‘told’ us what to do or who to be. They have just been very supportive and patient with us – trusting that if things WERE to get big, it would have to be because people embraced our band for exactly what it was. Now that we find ourselves in a nice position mentally and the public’s perception of us is correct, we’re all just seeing how far we can take it; both the label and the band.

OMH: Your earlier material on the Facedown EP – including The City – had a more synth-orientated sound, while Chocolate and Sex feel like they’re pushing the band toward a heavier guitar-led feel. Was this always the intention, or did it develop naturally as you went along?

MH: Well people have made the understandable assumption that our material has worked chronologically. For example; we wrote Facedown, then Sex, then Music For Cars etc. That’s not actually how it happened. We wrote our album first. When we came to releasing music, we wanted to provide people with a real wealth of material that depicted exactly what we were about; so people could get to know us like you get to know a person, learning more and more over time.

The EPs all have a lead track – on Facedown it’s The City and on Sex it’s Sex (obviously), and Chocolate is the lead track on Music For Cars. It’s interesting because we’ve taken tracks off our album to use as lead tracks on our EPs – as opposed to taking lead tracks off our EPs to use as singles on the album. Each EP has been written around a part of the album – taking an important moment in the story and extending and embellishing it. The album is a guitar led album, but that’s just because we wanted to challenge guitar music; we found that a lot more of a challenging idea then just doing more dreamy synth pop that ‘cool’ music blogs are always championing. We’re kind of bored of the mundanity and predictability of music at the moment.

OMH: A lot of online commentary has bundled you into the so called ‘new wave of British guitar groups’, but singled you out as one of the more pop-orientated acts in the group. Do badges and labels like these annoy you or are they a nice indication of recognition?

MH: Well, like I said before, it’s all a bit predictable. Coining the phrase ‘new wave of British guitar groups’ promotes the assumption that there has been no relevant guitar music of recent years, which simply isn’t the case. It’s not really in the hands of bands is it? It’s in the hands of people who write and talk about bands; they kind of control people’s perception. Now, I’m not slagging anyone off – I would never want to do that – but a lot of the bands we have been bundled in with recently are not REALLY the next great British bands are they?

I kind of ask myself the question, if you remove popular music magazines and people telling the public who is ‘really cool’ would all these bands’ music be ACTUALLY connecting with people? It’s not for me to say obviously, but I’m not 100% sold. In regards to our contemporaries, we see ourselves a lot more in keeping with artists such as AlunaGeorge, The Weeknd or The Neighbourhood. The fact we play guitars doesn’t really define us, there’s way too much going on with our sound for us to be perceived as the next Arctic Monkeys or whatever.

OMH: The Sex EP felt like a very personal collection of tracks, with a real sense of emotion coming through in the songs. Is it important for the band to have that element of human connection in the songs that fans can empathise with?

MH: The simple answer is yes. We’ve been making music together for a very long time, for ourselves, at our own pace – the only thing that had been missing was a direct emotional response from other people. So understandably we had no idea how our music would connect with people and make them feel.

When Sex came out, that was a massive deal for me. So many people told me of how it was ‘their song’ and how they found so much of themselves in the lyrics. I think our songs are so personal to me lyrically – so specific – that people can kind of find themselves in there, you know what I mean? What I have realised is that the human connection that you speak of, that’s the most important thing. You can spend months working on the sonics and sound of a record or a track, but if it doesn’t have that immediacy of emotion, if it doesn’t take you somewhere personally – what’s the point?

OMH: Coming from Manchester, is there ever any pressure to try and live up to the great musical heritage of the city?

MH: Kind of, but we don’t really care. With respect, it’s not all that relevant to us. We met at school around Manchester – but I was born in London and George in Brussels etc. so our personal affiliation with Manchester and our understanding of its tribalist attitude towards music came quite late on. I grew up on R&B and soul for example, as opposed to New Order. But as a city, it is the setting to all of our music in my head. It was the girls and endless gigs and general vibe of the place that bled into our music. Our geographical location has never seemed very relevant or inspiring to us. We don’t really like the idea of being judged on the city we’re from – or the idea anyone being judged for that reason, to be honest.

I think if you are at the forefront of a cultural revolution – like Oasis and The Stone Roses were – then your identity as people is as important to the whole package as the songs are, and that’s really cool. But we’re not those bands. We’re The 1975. And we’d much prefer to create our own world as opposed to being harboured by a localised ideal. Manchester has enough heroes.

OMH: What kind of influences have gone into the finished album, musically speaking?

MH: There are a lot of influences on there. I think with the album, the oeuvre of John Hughes was the main inspiration. Michael Jackson, Peter Gabriel, Talking Heads. I’m not going to go on about what I think the album sounds like, I’m still figuring it out for myself.

OMH: Tell us a little about working with producer Mike Crossey – what input did he bring to the album when you came to work with him?

MH: It was an incredible experience actually, something we had wanted to do since we were like 16. We co-produced it along side Mike. We kind of fell in love with Mike, both professionally and personally. He was very delicate in the way he approached us and presented himself and his vision of what we could all achieve. He was more than aware of the uncertainty that can be presented when you depart from a certain way of thinking or in this case – producing records, so he just made sure we understood we would be going in on a co-production level. He didn’t steamroll over how we do things. But once we hit the studio with him, his knowledge and technical understanding really brought the creative process to life. He just knows his shit to the ground and we’ve made an album that we couldn’t have been close to without him.

OMH: You’ve got an appearance at SXSW festival coming up this month – any nerves about heading over to such a massive event in the States?

MH: Nah, we’re just really excited. I think the fact that we have been on tour non-stop since the start of December has made us feel really confident in our playing ability – so as long as we just play out of our skin, we should be fine. That’s all we can do. We can’t wait to get out there.