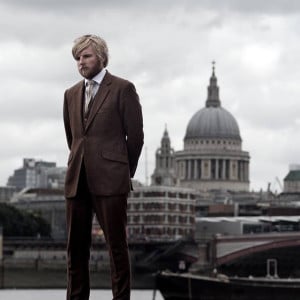 Describing Tom Hickox’s work is an unenviable task; there are elements of Neil Hannon’s baroque britpop in there, alongside hints of country, classical and pre-rock film scores, while the name Leonard Cohen gets regularly bandied around. And he’s as much personal as he is political. All in all, he makes for a fascinating listen, and his debut album War, Peace and Diplomacy is one of those records that delivers something new with every listen.

Hickox’s late father was Grammy award winning conductor Richard Hickox, while his mother was an orchestral timpanist, and the sensitivities and intricacies of their work are evident in Hickox Junior’s own output. Despite the provocative title, his debut doesn’t plough into his subject matter; rather he tells tales of the people behind the issues. A case in hand is A Normal Boy, a heartbreaking portrayal of a young man falling into the lure of terrorism. “I want to do what’s right, I want to carry the fight, ‘cause I’ve seen a light.”

These stories are made all the more engrossing thanks to Hickox’s heart-stopping vocal. He’s an old soul, whose voice echoes the greats; a gravely baritone that could be neatly filed next to Tom Waits.

As he gears up for a headline UK tour in May with a show at north London’s Union Chapel, we posed a few questions to him. He kindly answered…

How does it feel to be playing at the Union Chapel?
It was tremendous, a venue I’ve always loved and wanted to play. I lived in the other side of Islington for a large chunk of my childhood, so that stretch of London feels very much like home, and I’ve been to a few gigs there over the years. It’s a special space – I was honoured to have the opportunity to make music there.

You’ve been likened to some pretty huge names; does that put any pressure on you?
No, but it’s obviously very flattering. I just try to write songs that I believe in.

Who do you consider an influence?
Influence is a strange thing to judge, because everything in an artist’s life is to some extent a contributory factor to the art they present, consciously, unconsciously, willingly, unwillingly.

Has the response to War, Peace and Diplomacy been as you imagined it would be?
I’m thrilled that the album has been received so positively, it’s been humbling. But I don’t think it’s possible or healthy to second guess or anticipate critical response. You’d go mad, and start making duff music.

You’ve played with some great musicians; who would you most like to work with?
What a question this is! Too many to name probably, but how about these for starters: PJ Harvey, Jack White, Randy Newman, Tom Waits, Dan Auerbach, Matthew E White, Jonny Greenwood, Nick Cave, Warren Ellis…

Did your parents’ musical background influence the sort of music you make? How did you first start making music?
Every note of music that passes through you influences you to some degree. It was in my bones from my first breath. Songwriting just became something I did for love, as routine as eating and sleeping, in my early teens.

Your lyrics are very story-based; is this something you’re very conscious of?
Yes. I’ve written an album of first person narratives, a collection of chancers, rogues, unreliable storytellers, through which I hope I’ve been able to successfully think about the world, the people in it, and show some of myself as well.

What’s next for you?
A cup of tea. Then UK tour in May.

Tom Hickox’s album War, Peace and Diplomacy is out now through Fierce Panda. Details of Tom’s tour dates can be found here.