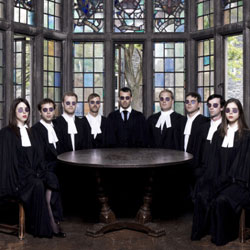 With over dozen members – excluding go-go dancers – on stage at any one time, Hidden Cameras gigs are undoubtedly exciting events. So how are they planning to stage them on this tour?

“Um… you’ll have to wait and see,” says Joel, though he’s not being elusive for the sake of it. It’s just because The Hidden Cameras don’t do planning. “There’ll be good musicians, good songs, oh I’m sure we will organize something. It really depends who ends up coming, who ends up playing with us. Whoever the opening band is will define what we do in our performance, as we usually end up taking half their members anyway! Last time we toured with Gentleman Reg, his keyboard player and drummer joined us, each night they got more involved… by the end they were dancing in blonde wigs… we just let it develop naturally.”

The band hits London for the first time on this tour on 18th March for a special acoustic benefit show for the Albert Kennedy Trust. “That’ll be a special gig, we’re just doing ballads. That space is a church with hard walls, so we’ll do the delicate songs, and we might do some rock songs stripped down. Our promoter is organizing an orchestra, I think I heard some talk about a harp player…”

The prospect of unknown harp players being added to line-up at the last minute would throw some bands into panic mode, but Joel clearly thrives on the unpredictability of the line-up. “I’m very relaxed about who might be taking part. Nothing is written in stone. We could rehearse a song with someone for the first time at the soundcheck and they end up playing with us. We don’t need three weeks of rehearsals.” How can you pull it off? “Well, the song structures are relatively simple. I think three chords is all you need for a song. Of course, that’s the whole concept of the band – controlled chaos.”

Fancy joining The Hidden Cameras yourself? Seems that all you need to do is turn up to the gig. “We get audience members to come up and play tambourine all the time. With varying degrees of success. Well, it’s always successful for the vibe and energy levels. Of course it doesn’t mean they can play tambourine. Sometimes people are so drunk that you think they’re going to trip over and fall into something. But that’s what it’s all about, the feeling that the whole thing could collapse at any time – the tension, the drama….”

Joel notices the level of audience participation varying hugely from place to place, and it’s not always the big cities that attract the wildest crowds. In fact, the absence of self-consciousness in smaller towns often makes for the very best, most unpredictable Hidden Cameras gigs.

“The last time we played England was really great. The Manchester gig was amazing – there’s something about Northern England and Scotland that is really spiritual and sexy. We’re better received in Glasgow and Manchester than in the south. You play in London or Paris or New York … any of these self conscious big cities – or LA, oh my god! – and yes people come out, but it’s harder to break through that jaded scene attitude of ‘oh, I’ve seen everything.’ They are so spoilt … but maybe I’m generalizing – London is such a diverse city!”

“Three generations back my family are from Glasgow. Sometimes walking down the street you see guys that look exactly like you… the same kind of colouring and the same kind of body hair… there’s something kinda sexy about that.”
– The Hidden Cameras’ Joel Gibb gets nostalgic

“Compare it to these places in the middle of nowhere, though. We went to Bergen in Norway, and drove for hours and hours through the mountains… and when we got there the people were just amazing. They were going nuts, spilling their beer all over us and going crazy.”

You don’t often hear Glasgow and Manchester being described as spiritual and sexy. Perhaps unfairly: what is it that turns Joel on about those cities?

“It’s hard to say. Maybe the physiology. Three generations back my family are from Glasgow. Sometimes walking down the street you see guys that look exactly like you… the same kind of colouring and the same kind of body hair… there’s something kinda sexy about that. And I think it’s sexy when the audience takes it up a notch and matches your energy level. It’s give and take.”

The subject of sex has always lent an important energy to The Hidden Cameras’ lyrics, though the new album seems to dwell more upon the psychological rather than the physical aspects of love.

“Well I’ve moved on. I don’t replicate things anyway. The first album reflects the naivet of my early 20s. I was songwriting before I even had a band or knew what writing songs meant. I was a lot more free… I didn’t think it was explicit at the time, I was just reacting to what was around me. I was surprised there was nothing around like that already.

“I guess you could call The Man That I Am With My Man the most graphic song that I’ve written, but for me it was just a reaction to a great song by Roy Harper called Me And My Woman. There you could say he is outing himself as a straight guy, and no one talked about that! I thought there needed to be more songs like that, a man saying what it’s like to be with his man.” Roy Harper’s song didn’t feature any accounts of golden showers, mind.

“That’s what it’s all about, the feeling that the whole thing could collapse at any time.”
– The Hidden Cameras’ Joel Gibb on the band’s live shows

“I don’t appreciate people saying ‘oh, they are G-rated now’,” he continues. “That’s what people said about [their last album] Awoo. Like ‘they are tidying themselves up’ or something… ‘the militant queer people sold out.’ I don’t care if they were disappointed – you can’t really please anybody but yourself, and I resent the expectation that people go in looking for explicit lyrics. That’s a tired exercise and I don’t want to pander to that. Perhaps that’s why the record is a little more mysterious in that way.”

“Oblique, yeah I like oblique. Anyway I feel like music is the more natural part of what I do. The lyrics are a more intellectual exercise – you are fitting words into musical structure. Sometimes they come out as sounds, intuitively, and then form into words. Sometimes I’m labouring over a certain song and filling it up with words is just methodical.”

So what next for The Hidden Cameras?

“Some bands create a sound and are very good at replicating that sound and spreading it out over several records, but that’s just boring isn’t it? I just want to be free and not care about that sort of thing. I’m working on a more rootsy record, with banjos and twanginess, and a more dark electronic experimental record too. When those two pieces come out you’ll see the totality of what I’m interested in.”

We wait with baited breath. In the meantime, if you have the chance, check them out in the UK in March. Who knows what might happen?

The Hidden Cameras’ album Origin: Orphan is out now through Arts & Crafts. The band tour the UK in March, with London dates at St Leonards Church on 18th March and Hoxton Square Bar + Kitchen on 24th March 2010.