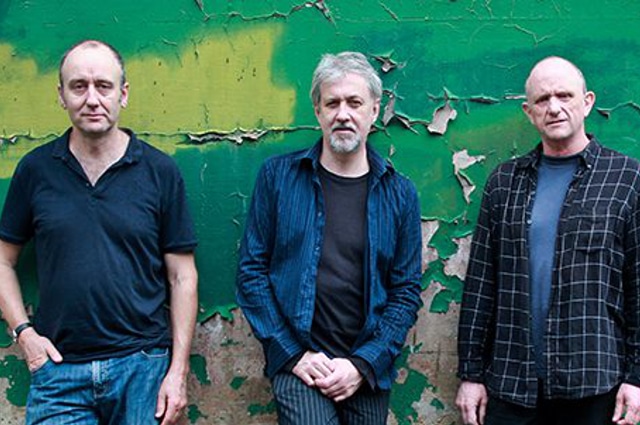 Most bands have some sort of backstage routine in advance of a live show, some kind of ritual or process that gets them in to the zone. Lloyd Swanton, Chris Abrahams and Tony Buck, the three members of Australian improvising trio The Necks, are backstage in London discussing the efficient design features of Dyson vacuum cleaners. It’s an odd way to begin proceedings, but one which affords some insight in to the group’s intellectual curiosity, analytical mindset and collective wry humour.

Perhaps there is a link between the ergonomics of the Dyson and the band’s approach to improvisation – the sheer suction performance of the Dyson being a mystery akin to the apparent spontaneity of improvisation? Surely that magic can actually be explained somehow? Acoustic bassist Lloyd Swanton has a theory on the group’s development over nearly 30 years of working. “One thing you realise as you get older is that the way you make music or art reflects the way you operate in the world. Over 30 years now, we’ve built up a solid stack of things that we do – which ones we do at any particular time is up to chance. That happens once the piece gets under way. There’s something about what we do that always makes us sound like The Necks – there’s an element that’s stable and not improvised.”

Tony Buck also seems to see the process as, at least in part, somewhat scientific, but does not see this as a need to remove the sense of alchemy. “You form a band to explore different ways of making music and there are parameters that you put on it,” he explains. “There’s vocabulary, methodologies and devices that work, or that get you out of sticky situations. That combined with having parameters you want to explore makes the band work. Yes it’s a myth that the music comes from nowhere, but at the same time you don’t have to pre-plan.”

“There’s something about what we do that always makes us sound like The Necks – there’s an element that’s stable and not improvised.” – Lloyd Swanton of The Necks

The band’s approach to improvisation certainly seems different even from the canonical names in the tradition of free improvisation such as Evan Parker or Derek Bailey, with arguably more of an emphasis on sound and texture than on exhilarating flurries of notes or jarring provocations. Tony Buck is quick to acknowledge the band’s absorbing of a wide-range of influences. “With improvisation, people may think of Derek Bailey or Evan – there are things that we take from that world. Diametrically opposed to that is the improvising of AMM or something or some of the hippy jam bands like The Doors. There’s a whole range of people who different things that we relate to and bring to this project.” It’s pianist Chris Abrahams who really pinpoints the distinct qualities of what The Necks do, however, particularly in their live performances. “One of the founding aims was to go for a group sound,” he says. “Speaking personally, much of the playing I’d done before was individualistic – very much in the jazz soloist mould. We wanted to create a sound that wasn’t actually individual.”

Mention is made of the recent album of piano duets from Richard Fairhurst and the late, great John Taylor, where Fairhurst and Taylor had aimed to make the recordings sound like one instrument, rather than two, employing lots of space in the music as a result of this aspiration. “It’s an organism. The three of us have a chemistry and we prioritise the sound of the ensemble. We’re not the first improvisers to want to be in the moment, but our particular approach to being in the moment meant that our pieces had this slowly unfolding, long range viewpoint. We never actually sat down and said let’s play pieces that last for an hour, but we did aim to be in the moment and if there’s no reason to be in a different moment, sustain that moment.”

The band certainly has a fearsome reputation for crafting very slow and protracted single pieces that unfold with a curiously patient intensity (their live shows make the stamina and endurance required for their sets very clear to see and hear). Their rare experiments outside of this form, producing shorter pieces, are also intriguing (2005’s Chemist and 1990’s Next). “Next was our second album. With it, came an immediate desire not to be pigeonholed as the guys who make one hour long pieces! Coincidentally, it’s the weakest selling of our albums so it’s probably considered the runt of the litter!”

There can be little room for doubt that this is a joke, for The Necks hardly seem to be a band driven by commercial considerations. The long form pieces seem like a natural way of exploring the significant impact of very small adjustments in playing dynamic or style. Tony Buck suggests that this has always been one of the chief motivations informing his desire to keep playing with the band: “Little timbral changes (for example the relative dynamic of the cymbal to the piano) can be quite significant – the sound of the music is what signifies the form. For other bands, it could be just continuing the in the same way with a change in the mix – for us, it actually alters what we’re doing.”

“It’s an organism. The three of us have a chemistry and we prioritise the sound of the ensemble…” – Chris Abrahams of The Necks

Surely the environment and space also play a role in this gradually unfolding process? Pianist Chris Abrahams makes a bold, if self deprecating admission: “When we started, we weren’t really aware of what we were doing in this regard, but as the band’s developed, it’s now a really structural element of how we create music – to sound out the space. What we do is very site specific. We will be very aware of how the music is sounding in the space. A very reverberant room is not normally that great for drums, bass and piano but it will bring to the fore other ways of playing, other methodologies that we use. We’re really not precious about this – we’ll play in the most reverberent cathedral space or the driest of rooms. It’s very difficult for us to be disappointed in the sound.” Swanton interjects to explain that there are still some challenging situations. “I personally don’t like a very dry room,” he says. “Our pieces tend to be a lot shorter in these spaces, if only because you can hit a note and it simply won’t ring for as long!”

How do the band then approach recording, when studios are necessarily a very different kind of environment from the clubs and halls where the band performs? “It’s a very different undertaking,” suggests Chris Abrahams. “There are elements to a studio record that are like live playing but the way we add material and overdub is very different. We’re very much in to using whatever is available, whatever we can bring to the recording. That might be electric guitars or keyboards, or simply using the resources of the studio. We never look at a record as something we would go out and tour.”

So how much of that process is recording ‘as live’ in the studio and how much of it is formed during post-production and mixing. Swanton makes an interesting point: “We don’t just have the ability to layer and layer, we also have the ability to radically cut back what we have put down. A lot of the stuff doesn’t make the final cut in the mix.” Tony Buck goes further, suggesting that “the piece of music as such doesn’t exist until the mixing process. That’s where we impose form.” At this point, all three members of the group are keen to acknowledge the vital role played by the ‘fourth Neck’, mixing engineer Tim Whitten, with whom the band have recorded nearly all their albums.

The group have had two projects for 2015. One is a limited edition boxed set drawing together eight of their most acclaimed albums. Might this be a slightly strange, perhaps even uncomfortable venture for a band placing so much emphasis on being in the moment? Can they really do nostalgia? “It really is just a matter of putting an attractive binder around eight of our existing CDs,” Swanton jokes. “I can see how people would (at this point he stutters a bit) find that attractively presented and priced.”

Of their new studio album Vertigo, released on ReR this month, the band have a gently simmering debate as to how to describe it. Swanton boldly states that it is the group’s “most humorous album yet”, to which Abrahams responds by saying “I thought it was very sad.” Tony Buck, ever the diplomat, places it in a somewhat different space, claiming “it’s very dramatic. There have been a couple of times where I’ve listened back to it, got to the end and thought phew!”. The critical response, whilst typically positive, has perhaps sided with Buck’s interpretation by emphasising that it might not be the easiest or most comfortable route in to the band’s working methods. It certainly sounds ominous, perhaps even menacing, and the variety of sounds and approaches is greater than usual (there’s a fascinating section involving what sounds like a vintage electric piano – perhaps a Rhodes or Wurlitzer). Swanton very much sticks to his guns on the what he sees as the album’s core humour. “I very much do think it’s funny,” he repeats “and I don’t think we’ve really done that before”.

“It’s very dramatic. There have been a couple of times where I’ve listened back to it, got to the end and thought phew!” – Tony Buck of The Necks on the trio’s new album Vertigo

The album is their 18th release, surely an impressive achievement and record of their longevity. Swanton isn’t so sure. “Actually, for a band that’s been around for nearly thirty years, it’s a bit pathetic! But we release at our own pace and it works for us.” Chris Abrahams highlights the band’s tendency towards self-editing and their differences with peers in the rest of the improvised music scene. “We could have released a lot of live albums if we’d wanted to. We’ve become more and more choosy. In fact, we have an ongoing live recordings project that seems to have stalled. Some of the scene that we are still working in, people we think would understand the process of making an album, still ask us if we played it all live in the studio. I mean, whilst it’s not Tusk (Fleetwood Mac’s epic, unrestrained double album follow up to Rumours), it’s still an unusual amount of time to spend on making a record that is going to be released more in the improvised music scene. We all make records with other people that tend to be things you record in a day, or live performances that end up becoming records, so I think 18 records is actually quite a lot – I’m on your side!”

Tony Buck again finds the middle ground. “We’ve been pretty relaxed but we haven’t been shirking our responsibilities.” In fact, the band tour with steadfast consistency. They return to London for a four day residency at improvised music hub Cafe Oto as part of the London Jazz Festival (with one of the dates being a collaboration with legendary saxophonist Evan Parker).

The Necks play Cafe OTO in London on 13-16 November 2015 as part of the 2015 London Jazz Festival. Tickets, tour dates and further information can be found here.