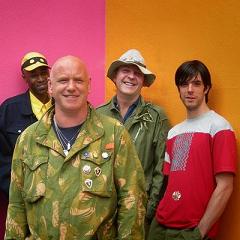 The Orb are back. The original pioneers of that early 1990s phenomenon known as ‘ambient house’ are refusing to go away – and why should they, when they’ve made as convincing an album as The Dream?

Yet being back isn’t a phrase that will wash too well with Dr Alex Paterson at the moment. The reason? His back hurts – and it’s bad. “It’s been hurting ever since we got back from Moscow the other day” he says. “It’s bearing up now though, it’s getting better.”

So far today, I am the first English speaking interviewer Dr Paterson has encountered. “I’ve not long been on the phone to two Eastern European journalists, and I had to keep repeating stuff to them, they couldn’t speak any English. My girlfriend thought I was having an argument, because I was getting so frustrated! In the end it was just going through the motions so that I could get it done.”

Paterson is buoyant however – and there’s no doubting The Dream is the source of his good mood. Recalling its recording progress, he remembers how, “with Tim Bran and me the main players, we were recording between nine in the morning and one in the afternoon over about fifteen months. Then, when we were gluing the whole thing together, Andy Hughes came in and worked with us. I think on this record we got an old school sound back – there’s a great chemistry. It really works when we’re in the studio together. It was great to work with Steve Hillage again, too. I’ve always protected him; he was and still is a totally innovative person. I did a gig in Heaven with him recently, he was there as part of System 7. And he’s not a guitar hero, which is great as well.”

He continues to big up his collaborator. “My first experience with him was when he came on and played guitar with Sham 69, live on stage, and I was down the front in the crowd. I didn’t know that fifteen years later I’d be working with him! It wasn’t jiggly jiggly stuff, like you heard a lot of then. He had long hair and a fireman’s jacket, and it stood out for me – it was probably one of the first festivals I’d gone to where I saw him.”

“I think on this record we got an old school sound back – there’s a great chemistry”
– Alex Paterson shows his confidence on the recording of the most recent Orb opus.

Paterson has an enjoyable characteristic of deviating wildly from the subject at hand, so it’s no surprise that when I suggest the Orb have become more soulful, he takes that as a point of departure. “For this album we got Juliet Roberts, the soul ‘maestress’. It was a pleasure working with her and bouncing ideas off her, seeing how things should be done. We’ve used vocal samples before, but never really a live vocalist. We still get that thing in America though – people asking us “where’s that girl vocalist, the one on Little Fluffy Clouds?” We have moved on, though, and we’ve used Ako Omori, a local Battersea boy like myself. We moved him away from basketball and got him into the studio. He said “I really like the Orb”, and that was good enough for me!

Has Alex ever thought of doing vocals? “Years and years ago I used to do vocals for , and now that this album’s been made for a while I’m doing vocals on Routemasters tracks” he says, “but not really yet on the Orb stuff”.

Talk turns to playing live – and inevitably that brings back memories from the early 1990s, in particular the Orb’s renowned tour of 1993. “We used to have a sheep mascot called Fluff”, recalls Paterson, “and there were riots with locals trying to nick him off stage. I remember a time, in Aberdeen I think it was, where they actually got him and we had to refuse to play until he was returned!”

Nowadays he spends an increasing amount of time abroad, where he has found a more than sympathetic audience. “I spend quite a lot of time in Germany, and they definitely get it a lot and have a lot of good stuff to give. Whereas the British gave them Krautrock – thanks guys! It’s just trying to cover up our inadequacies about how music should be.”

He branches off again, talking about the reception afforded to The Dream. It’s had the reviews you would expect really. With people like Mojo, I’m happy to say let them stick it in their pipe and smoke it. Mozart had his day, but it wasn’t fully had until he had died. Aphex Twin, ourselves, Autechre – maybe the same thing will happen to us?” And then he laughs, making it quite clear that any suggestions of bigheadedness remains firmly at the door.

“I see Brian Eno to be more of a pioneer than any of these people” he continues. “He’s given himself so much scope. It should be open, you should be able to delve into different branches, and find different streams of music. You might find a Hawaiian bluesy tune, but then the record labels want another one. You can’t do a classic and repeat it again, which is what I think a lot of people have looked for with our earlier albums.”

These are records that have just seen an overhaul as part of Island’s reissue campaign, with u.f.orb and The Huge Ever Growing Brain… albums given a new coat of paint and a selection of B-sides and offcuts. “I think it’s been a good thing,” enthuses Alex. “They were going do reissues, and there was a campaign. We’ve just been OKing Orblivion and Cydonia in the last few days, so they’ll also be coming out. My only problem is it costs too much to buy that sort of thing these days, rather than click on to them and get them for much less online.”

“It should be open, you should be able to delve into different branches, and find different streams of music.”
– Dr Alex Paterson retains an open mind.

It comes as no surprise to learn that Paterson has been surfing for source material. “There are some really cool samples off the net. You can hook up to stuff you really like from the ’80s, which I get a big thing out of. I’m talking about Kiss Radio (New York) from 1982 to 1989, when they had Shep Pettibone doing shows – they fucking rocked! I used to religiously get this girl in New York to record the show and send it over to me for my job to hear what was going on in the US, but because I really liked it as well. She started sending me C90 cassettes recorded between 11 and 12 in the evening, and at 12 it turned into Tony Humphries doing techno that I’d never heard of. So I said I’d like to hear Humphries as well. I used to have Kiss FM parties in a squat in Brixton, with a load of cassettes. The first concert we did as the Orb was for Kiss FM, but that was the London station.”

Going on to assess the immediate future, Paterson is optimistic. “I’m doing a lot of DJing, and looking at maybe doing a Glastonbury set, though that’s to be confirmed. We’re playing the Fuji Rocks festival, and are looking at kick starting a tour in the US,” Shouldn’t they be touring in the UK? “You would think so! We’re having trouble getting suitably sized venues at the moment.”

The Orb, it seems, have staying power, an irony Alex considers. “It’s funny when you think that we came out with a logo of ‘ambient house for the E generation’!. I watched Robert Plant on the Richard & Judy show the other day and it was hilarious, I know I won’t be doing that in twenty years.”

Rather famously, Paterson had a penchant for disruption at the band’s Top of The Pops appearances. “Everyone hated us at the BBC, they didn’t want us to be there at all! It was hard work being told we would get thrown off the set, and to stop drinking brandy at twelve in the afternoon and wait until the bar opened at five! Then we fast forward and Robbie Williams came in to the studio and wanted to know who The Orb were. We tried to take them all on in a football match in the corridor, Take That, and Utah Saints and Def Leppard were there as well.”

He continues. “I saw the madness of that when Killing Joke were doing a tour with Frankie Goes To Hollywood. I’ve got a sixteen-month old boy upstairs and my daughter’s now seven, they’ve a lot more to go yet. And I need to get them musically inclined. What would be interesting is with Tim and his kids; we could get them to form a band! Mind you if kids are anything to go by they’d completely rebel against that.

Then it would be running in the family…and as Paterson chuckles at that thought it’s time to leave him to return to the Eastern European interviewers, the fires still burning brightly, however painful that back is.

The Orb MP3s or CDs

The Orb on Spotify