Interview: The Prodigy – “To write a good album, you have to come back from a bad time” 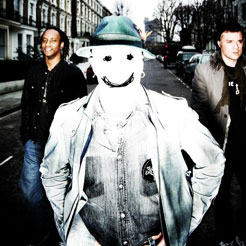 The punky brutality of their music made The Prodigy one of the few artists from the Post-Acid House Rave scene to find favour amongst the rock crowd. After a lengthy identity crisis they have rediscovered their past, and with it their groove on new album Invaders Must Die.

We’re picking up the story with Liam Howlett and Keith Flint in a small conference room in the Electric Club, formerly a much-loved flea-pit of a cinema, now a private club with unholy membership fees in the middle of London’s Portobello Road.

“As far as Ladbroke Grove is concerned,” says wide-eyed and super friendly front maniac Flint, “being here was the right energy for the album. You know, up there…” – a fearsomely be-ringed index finger points North towards Golborn Road – “…that’s obviously the more bad-ass area. And up there…” – the finger goes round, to the clunk of Heavy Metal bling bits crashing against each other, to point towards Notting Hill Gate – “that’s the lah-di-dah area. And here, in the middle, that’s where they’re clashing and where they all agree to disagree.”

“The energy was great,” he enthuses. “Being here certainly was the right energy for the album, and we wanted that atmosphere on the album. My flat’s over the road there.” – the finger points straight out of the window: “That literally got busted the other day by the police! They came in with riot shields and the whole ‘freeze!’ thing and everything else…”

Excuse the interruptive question, Keith, but what had you done? “I hadn’t done anything! They thought I had. But them sort of things are interesting. And certainly the energy and the vitality of that is in the album.”

Howlett, the man behind The Prodigy’s music, listens to the singer’s fervent praise of Notting Hill, a contented smile playing around the corner of his mouth. “Definitely!” he interjects, a monumental black leather jacket creaking like a door with every move: “And what’s also great around here, it’s like old skool. It hasn’t changed. It’s starting to change, some of the smaller shops are starting to go. But there’s three record shops within streets of each other! And so every day – I loved it – sifting through stuff, discovering things, going back and pulling samples out. ’cause my old record collection is well and truly pillaged. There’s nothing left on it. Plus, I just love record shopping!”

The album that resulted from this reunion is The Prodigy’s fifth, Invaders Must Die. It puts an end to a 12 year long identity crisis which began the very moment the band delivered The Fat Of The Land, the creative and commercial high point of their career to date.

The story itself is a well-worn evergreen by now. The Prodigy – Howlett, Flint, plus rappers and dancers Maxim Reality and Leeroy Thornhill – came together at the height of Rave in Essex. From the beginning, courageously, they integrated elements of Punk, Reggae, Jungle and Hip Hop in their dancey tunes. This meant they covered a much broader stylistic spectrum than was generally the case within a scene that liked to bicker with sectarian fervour about who and what represented the true value of the independent dance vibe.

It is precisely because of their free-thinking attitude and their refusal to bend to the trends of the day that The Prodigy’s earlier albums Experience and Music For The Jilted Generation today still sound remarkably fresh. Their big moment came in July 1997 with the album The Fat Of The Land and the startling single Firestarter. The combination of punk dynamics and dance beats was an inspired move and opened the door for Techno to meet Rock.

For three years, The Prodigy thoroughly enjoyed the fruits of their success, they toured the world’s festivals and developed into an astonishingly high-octane live spectacle. Then, it all became a slog. One complete album was consigned to the recycle bin after even Howlett had to agree that the reviewers had a point when they slagged off Baby’s Got A Temper, the single released as a taster for said LP. Thornhill left the band, Flint started his own, whilst Howlett struggled to engineer a new style and a new sense of motivation toiling alone on his laptop.

The resulting Always Outnumbered, Never Outgunned reached number one in the UK, but no one was truly satisfied with The Prodigy in glam pop disguise. It marked a turning point nevertheless, especially for Flint. Copies of his own album had already been sent to the media, reviews and stories had been published about it – and then the release was pulled at the last minute. Today, Flint claims that he was anything but unhappy about this.

“On the contrary, I’m really, really happy about it!” he counters. “Because when Liam wrote Spitfire he wrote a baseball bat to wake me up. I put that on my stereo – and funnily enough I’d been listening to some tracks I’d been working on – and I had it at a volume that suited my production and my sound, and Spitfire came on – and it BLEW my speakers to bits! It didn’t have a knob on it, it had a button, and I was trying to press it down whilst this sound was ripping my stereo to bits. And it was just a baseball bat, it came at me proper – FUCK! I went: ‘What are you doing! What are you fucking doing when you could be making music with the guy who can write THAT! Wake UP!’ And I just packed everything up, sold it, and knocked on his door and said ‘I’m back!'”

“My analysis of that,” says Howlett, still looking dead chuffed about everything, “is this. Keith’s the sort of person who won’t sit on his arse. At the time when we were meant to be doing our last record I wasn’t ready to do a record. So Keith’s like, ‘I fucking got to be doing something, I’m gonna write some songs.’ And that was the right thing for him to do, man, because if he doesn’t do that he’s gonna go insane. I now can understand that and appreciate that, and now we talk about that side of things.”

“To write a good album, you have to come back from a bad time.” – Liam Howlett

The implication is that there had been times when they weren’t able to talk about this sort of thing. Even in the early days of preparing for Invaders Must Die, the process didn’t go according to plan, which was to rent a big studio near Portobello Road, invite friends round and let the album happen in a kind of friendly party atmosphere. “We set up a studio just a couple of roads away,” says Howlett. “It was quite a big room, and we wanted to make a really relaxed atmosphere. So we had settees, and people would come in, hang out, that sort of thing.”

It was great to begin with: “We didn’t have a record deal at that stage so there was no pressure, it was very loose. We did record quite a lot of stuff. But we never finished anything. The partying maybe sort of took over a bit too much. Then we got a record deal, and around the same time I was beginning to go ‘fuck, we haven’t got anything like an album!’ Keith said ‘why don’t you forget about the album for a minute, we’ve got this gig, the Gatecrasher event in May this year.’ We all decided, right, let’s write a new track just for that show. Forget about the album for a minute and just write for that.”

“And so we decided to write the track that ended up being Warriors Dance,” he continues, “which is on the record. It was kind of the 20th anniversary of Acid House, so with that in mind we started to build the track. And the way I’d written the track reminded me of the way I used to write music before. Not in its sounds so much but in the way the track was built.” Flint takes up the point: “I said to Liam: ‘You own that sound. You woke people up with that sound. You’ve made people listen. You must use it, it’s yours!'” Howlett understood exactly what Flint meant. A new sense of urgency gripped the band, they relocated to a smaller studio nearby where there was no room for sofas and crates of vodka, and buckled down to work.

They are, it is safe to say, happy with the results. “We feel that everything we’ve written for this album we’re really really happy with,” says Howlett, “Really really happy! We’d done a few collaborations and things in the big studio, but in the end we felt they would only have detracted from what we’d got.”

The album ends – surprisingly, it seems at first, but fittingly – with Stand Up, the kind of euphoric psychedelic sing-a-long the Screamadelica-era Primal Scream would once have come up with. “Yeah, it’s a celebration, that last song,” concurs Howlett. “This album to us feels triumphant. It feels really triumphant when you listen to it. To write a good album, I really and truly have realised, you have to come back from a bad time. D’you know what I mean?”