Wild Beasts: “It’s so much more interesting if things are romanticised” – Interview 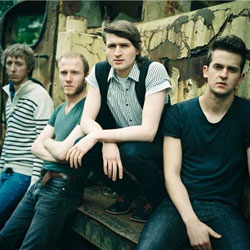 Kendal four-piece Wild Beasts are in the wide open space that is London’s Regent’s Park, a fittingly relaxing spot for the band to unwind in after four days of gigging and promoting. A couple of radio sessions were followed, on the night before we meet, by a triumphant show at the Hoxton Hall.

We take to the grass, enjoying the surprise appearance of the late afternoon sun. As guitarist Ben Little and drummer Chris Talbot take in the late afternoon air, operatic-voiced front man Hayden Thorpe and bassist/vocalist Tom Fleming wax lyrical about their Hoxton experience.

“We all came off stage feeling brilliant,” says Tom, “and it’s quite rare for all of us to feel that way. We had a lot of people come to see us last night.” A passionate voice, it’s already clear he senses something of a change in the band’s reception. “Now we find we’re playing to people who know our songs, and that’s something of a sea change. There’s no getting around the fact that it’s very flattering and a great thrill, especially when people recognise songs as soon as you start them.”

Their canon of songs now includes those from the acclaimed second album Two Dancers, recorded at a remote Norfolk studio. Should we believe it was the difficult second album? Hayden Thorpe, on whose falsetto Wild Beasts’ sentiments are usually carried, shakes his head. “No, there were too many limitations. We knew the time scale we had, and we knew the targets we had to meet. We had about 15 songs, and every song we recorded, bar one, to put on the album. So in a sense it was ‘Let’s just go in with what we feel like today’, and there wasn’t a schedule for which songs we were going to do when, it was more like ‘How does it feel’?”

Tom adds his two pennies’ worth. “It was all ‘now now now’, and we relaxed about that. I think the best albums and the worst albums have limitations and pressures, and there’s nothing wrong with that. We were pretty pleased with it, there were no guarantees, but we were very satisfied.”

Two Dancers brings in more vocals from the band to complement Hayden’s falsetto. “We’ve developed, you know?” says Thorpe. “We’re very open in everything, it’s a four way thing. Tom’s got ideas in the writing as well, and it just works – it was a dynamic that we wanted to make the most of. The title Two Dancers is a reflection on that, the two dynamics and also in terms of the lyric writing and the initial ideas it helped to bounce and react off each other, and that’s how the album developed.”

The Kendal quartet have several distinctive aspects to their music, not least their lyrical writing. “We’ve talked about this a lot recently,” says Tom, “and I think it’s about art that exists is like this,” – he spreads his arms wide – “and the bits we use are like that,” – he narrows them considerably. “We wanted that breadth, and to hold that scope, and the only way to do that is get in touch with why you’re doing it, and what you want to talk about, and make your world interesting.”

He pauses briefly. “You need to tell your own story in a way that is only yours. Something like ‘This happened, at this time, by this band.'” Hayden elaborates: “It’s also been about taking hugely complex subjects, and trying to condense them down into something that’s digestible. For that reason it is very dense, and we use a lot of symbolism. There isn’t any room for waste, every word has to have a function, and I think because of that it isn’t acceptable to just take from the standard songbook anymore. I think of who we’re making music for, who would buy our albums – and that’s us! We would want to be entertained, want to be challenged.”

So do Wild Beasts write romantic music? “Definitely”, says Hayden. “It’s highly romanticised; emotional and nostalgic as well. It takes a certain level of nerve to do that, because in society you’re opening yourself up, and you’ve got to have the arrogance to think that someone’s going to want to hear it. I just think it’s so much more interesting if things are romanticised, you know? What I ate for breakfast might not be very interesting, but if I wrote that it was in the candlelight with the wind blowing through the window, then it’s clicking a bit better.”

“What I ate for breakfast might not be very interesting, but if I wrote that it was in the candlelight with the wind blowing through the window, then it’s clicking a bit better.”
– Wild Beasts front man Hayden Thorpe talks romanticism

Part of that romanticism could be said to have caught the outdoor feel of Kendal and the north Lake District. Wishful thinking? “We haven’t done that deliberately,” says Tom. “You know we didn’t set out to make an English pastoral record, but we are kind of flattered to have that comparison drawn.” The weather, too, can almost be felt. “We’ve been told about that reference a few times”, says Tom, “heavy skies, a lot of people have said. It’s beyond me to know about that, but I can see what people mean.”

Inevitably, talk turns for a while to Hayden’s extraordinary falsetto, and the softly spoken singer recounts its discovery in the context of the band. “I was about 16”, he says, “and me and Ben were already playing music together, about seven years ago. The key thing is that the singing developed with the music and the words, and that it’s not in isolation. It doesn’t make sense, but in the grand scheme of things it’s part of what we do, and because it develops again, the lyric writing complements the singing style and vice versa. And that’s how I hear melody, full stop.”

He sits up straight, considering. “There is something to be said for saying difficult things in a lovely way, you can afford yourself a lot of space. Initially it was a bit of a pain in the arse, because I wanted to sing like Kurt Cobain or somebody, and it’s not the done thing to sing at a working men’s club and sing in a falsetto! It’s not the thing to do. But there’s a thrill to that, you know, and again, that’s something about the potential of Wild Beasts, the element of shock.”

Tom puts it another way. “There is the fear of being the object of ridicule, but I think you have to deal with that very early, and that’s part of being in a band, you have to accept ridicule”. “We were taken seriously straight away because of it”, says Hayden. It’s like saying, “I’m gonna play for Man Utd”, and people just think you’re a lying bastard! But we’ve spent the vast majority of the last eight years locked away in basements and damp rooms, when we probably should be out having a good time!”

That said, the band are satisfied with the reactions they see. As Hayden puts it, “We constantly wrong foot people.” But is it almost a surprise to be the authors of a difficult second album touted by many as a candidate for the best album of 2009?

“I think we found the album a hell of a lot easier than the first one in the end,” says Hayden, “and we were empowered by knowing ourselves, knowing what it entails, knowing how to record, and knowing the industry. It was a lot smoother, and at the same time we allow ourselves to take risks – which we should do. I mean, what have we got to fear, what’s the worst that can happen, what is there to lose at the end of the day? That’s the approach that should be taken with music, and with art in general. You take that risk – you might make a mistake, but you’ll be all the more endearing for it”.

Better than taking a safe approach then? “Who is that person?” demands Tom. “Who is that person in the middle ground, that wants no thrills or risks? I don’t know who that person is, because he’s no friend of mine!” He’s worked up a head of steam. “I think we are seeing that people are pig sick of being patronised, they actually want something that challenges them, and something for the bad times we have at the moment. I think the way things have gone in the last year, people are saying like ‘the party’s over’.”

Hayden takes over. “I think there are less albums being made for the sake of it, there’s not as much decadence and at the moment it isn’t a logical career path, to be a musician. It’s a hard job, you know – we’re all exhausted, we haven’t had much sleep for the past four nights, and the strange thing about the way music works now with the internet is that everyone is their own expert and can say anything they want about you. You can be publicly ridiculed or praised, you know? I think people who are publicly ridiculed normally earn a very good wage, and have a very secure existence. With musicians it’s part of the thing, you have to take a tomato in the face now and again!”

His theme carries back to Tom. “It’s a funny position to be in right now, and I think it’s a bad time for the music industry but not music itself – I think music is a lot better than it was even a year ago”. Does he have anyone in particular in mind? “Well I think it’s fantastic The Invisible have been nominated for the Mercury Prize, and we’ve just had a listen to the Junior Boys album, Domino gave that to us – and how they aren’t massive I don’t know.”

What’ve reactions to Wild Beasts been like in their home town of Kendal? Are they massive there yet? “There’s a huge billboard at Kendal station at Domino’s behest”, exclaims Tom, “and it looks spectacular!” “It’s almost the stuff of dreams”, takes up Hayden, “schoolboy dreams, you know – you get an album out, and on the way to school you have your posters taking up this grotesque wall. It’s like taking a helicopter, flying over the town and taking a piss on it!” Tom: “I can see someone taking a huge black pen to it though, writing after Wild Beasts ‘…are dickheads’, that sort of thing. It’s good though, people are genuinely interested in it, and talking to Kendal ex-pats around the country, they’ve been to our gigs and like us.”

But will Wild Beasts ever be big enough to rival the town’s other great export, Kendal Mint Cake? “But how big is mint cake, though?”, asks Hayden. “It’s been high, hasn’t it?”, says Tom – “been to Everest and that”. Chris pipes up: “Maybe if we shift more albums in a year than bars are sold, we’ll be bigger.” “Why not Wild Beasts Kendal mint cake?” Hayden laughs softly. “We might be on to something here – you could have a download code on it, so you eat the bar, you’re buzzed off your tits, you buy the album and put it on, and the world’s a better place.”