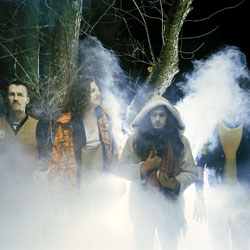 This interview was published in 2008. We interviewed Yeasayer again around the release of second album Odd Blood. Read the new interview here.

“Yeasayer (pronounced ‘yay-sayer’) takes place in the future,” say the Brooklyn-based band of the same name by way of introduction.

“Somewhere in the Middle East, where citizens wear turquoise robes, live in crystal towers, and overindulge on Peter Gabriel albums.”

The four-piece describe their music as “Middle Eastern-psych-snap-gospel” and brought it to the world in the form of All Hour Cymbals. Astonishingly this melange of sounds and textures, one of the year’s most original albums, was Yeasayer’s debut.

Following a low-key USA release, with Europe catching up a little later, they toured with fellow critical darlings MGMT. By then their music was well and truly on the radar. So, when they stopped over in London, we collared one of their number, Luke Fasano, to hear more about their exotic gospel.

Chris Keating, the closest they have to a front man, is also in the house but is seconded for another interview; they explain that there is no ‘front man’ and they are all equal Yeasayers. As Keating leaves, I notice that Fasano seems to be wearing a fishing net; a supersized string vest of sorts, possibly made for Rab C Nesbit’s hitherto unknown cousin (a rarely seen highland ogre). Fasano, however, is not at all ogre-like. Drummer, co-writer and vocalist in the Brooklyn-based quartet, he’s eruditely descriptive on the band’s story to date.

“The project initially was Chris and (guitarist) Armand (Wilder); they grew up together, since they were little kids. Arnand went to the same school as Ira (Wolf Tuton); Ira is also Arnand’s cousin. Chris moved to the city; I was already living there. They started the band and by the second show had Ira playing bass for them.”

Fasano was the last to join. “The three of them worked on material for about a year; they had a drummer, they didn’t have a drummer, they had a drum machine, an iPod; then they went looking for other people and found me through friends. They described this project they were working on to me which sounded horrific. This could turn out to be the worst thing that I’d ever heard. Turned out to be the best thing I’d ever heard. I’ve been in the band for two years.”

As co-writer and vocalist, Fasano underlines the band’s equality. On the album, “all of us are doing about three things at once, at any one time. I’m playing the drums but also singing; Ira’s playing the bass but also using pedals that make his bass sound like a flute; he and Chris do a lot of the main harmonies. Chris has two different samplers; some of the sounds are from there.”

A flute from a bass? “We’re definitely not the kind of band that’s afraid to push a button and get a different sound.”

So how do they set about creating this music? “The way that the songwriting happens, someone will have an idea for anything – a couple of words, a phrase, a vocal melody, an entire part to a song,” he begins. “On Wait For The Summer, Arnand wrote it pretty much in its entirety just before we were going to mix the album. One of our songs, Final Path, that was supposed to be on the album, ended up getting swapped out and Wait For The Summer put in its place. We’re open to everything.”

“Some of the most transcendent moments I’ve had have been with music.”
– Luke Fasano

Their sound is organic, but they do still enjoy gadgets. “I’ve got a Roland STS drum pad sampler; you can play up to eight patterns playing simultaneously,” he gushes. “We’re opening ourselves up to a lot of different formats of songwriting.”

Such openness was born of necessity. “We only had four or five days in the studio, so we just put down all the basic tracks that we could get down, immediately. We didn’t even get into the vocals. We took all that stuff home to our studio and spent about four months obsessively adding, subtracting, changing everything, adding tonnes of overdubs; that’s where the real orchestration comes from.”

The final mixes bury the vocal harmonies in the mix to such an extent that the lyrics become secondary to the vocal harmonies, yet the lyrical themes of apocalypse, war and redemption are as big as songs get. “We are the sort of band where, if the words just existed on their own, it would seem kinda pointless. The melody could exist on its own. The balance has shifted towards the melodic elements.”

What lyrics there are are “literal reactions to the time we find ourselves in, to things as basic as relationships or as complex as personal mortality and the end of the world.” Quite a range, then. “And politics.”

“It had been uncool to have harmonies, but now it’s cool again.”
– Luke Fasano

As for the music, 2008 has been the year that rather a lot of indie bands turned to Africa for inspiration, like Peter Gabriel did all those years ago; Vampire Weekend even referenced him in one of their songs, and elements of the continent are there for ears to hear in music by TV On The Radio and Foals too. Superficially it could seem that several acts looked in a similar place at a similar time for musical inspiration. Reasonably, Fasano’s not having that. “I don’t think any of us really sound that similar,” he counters. “The true similarity is that we’re all fed up with straight guitar-driven rock. It was nice, that whole back-to-basics, simplified rock’n’roll, going back to its pure elements, like The Yeah Yeah Yeahs and The White Stripes. Then you want to move on to something new.

“The reaction to it was that now we can do anything we want,” he continues. “A lot of people got excited about singing. We had all been in choirs, barbershop quartets, musical productions… Singing is a big part of what Grizzly Bear do, or a band like Animal Collective. The vocals are very important. It had been uncool to have harmonies, but now it’s cool again.”

Sampling and laptops have opened things up well beyond what they did for dance music. “The spirit of collage is what our band’s about,” says Fasano, so while “we’re not a laptop band, it’s almost like a game to see who can find this other thing that people haven’t heard with an amazing sound, or amazing pieces of song from a Bollywood soundtrack…” He gives an example. “Chris got a CD of Iraqi folk music with amazing sounds on it. It’s not more exciting to me because we happen to be blowing up most of Iraq right now. It’s exciting to me because, like, what is that thing – what the fuck is making that sound? The sonic elements are the exciting bits. The rule is, whatever it is, whatever the genre, you can probably take something from it.”

With what they’ve taken, Yeasayer have made music that, live, has been described as a religious experience. “There’s the same sort of reverence that people have for their worshipping experience that we have for our musical experience,” agrees Fasano. “Some of the most transcendent moments I’ve had have been with music. There’s a reason why, when you’re watching a movie and they try to make you feel something, they put music on. It just speaks very directly to people and it can become a transcendent experience, and that basically is what sprituality, or religion, is for us.”

“There are idioms in religious music; there is a rapture that I think you can reference without being overly religious yourself.”
– Luke Fasano

Just in case anyone wondered, he says “None of us are religious at all. I was raised pretty strictly as a Roman Catholic but I decided pretty quickly that it was not something I was really interested in. You see a lot of negative aspects…” he trails off. “There are a lot of positive aspects,” amongst which he includes gospel music and being part of something. “More than half of all music that’s ever been written is religious. Probably more than half of all art is religious in nature. That was the way things got done. There are idioms in religious music; there is a rapture that I think you can reference without being overly religious yourself.”

This year, be it Santogold, Yeasayer or Hercules And Love Affair, it’s from Brooklyn and it’s making waves. Cue lazy hacks talking about a Brooklyn ‘scene’. “This is a notion that we’ve tried to disabuse,” says Fasano. “It’s not like there’s some kind of club of musicians in Brooklyn and we all get together in the same bar and you do this and you do this…” And what of Vampire Weekend, a band whose music sounds nothing like Yeasayer’s but who often get mentioned in the same sentence? “We played with those guys once and so I’ve met them once,” Fasano sighs. “I don’t think we’re stepping on each other’s material; there’s plenty of room for us (all) to exist.”

As for why suddenly everybody seems to be living in Brooklyn, my theory is that they all love James Murphy so much they have to be near him. Fasano has another theory. “Nobody I know can afford to live in Manhattan!” he says. “Everybody moved out and moved into Brooklyn, which is an enormous place. Manhattan is kinda small. But it goes up pretty high.”

Yeasayer have been to the UK a few times now. How does New York City compare to London? “Last time we came here we played in Manchester to about four people. Now our gigs are pretty full; it’s been a big change. I don’t know what it is that we’ve done, but I’m glad that there’s interest there and that people are actually coming out to see us. I suppose last time we didn’t have an album out, so people didn’t get so excited.”

The record was originally released Stateside in 2007, so it’s no surprise that Yeasayer have been working on new material since. “I’ve got some songs back home, Chris has probably got 15 songs, Ira’s probably got 15 songs, everyone’s got a bunch of material,” he says. “There’s enough there to be whittled down and crafted into the next album.” With All Hour Cymbals the foursome have set themselves a high bar to jump over with the follow-up, but with their approach to music making you wouldn’t bet on a difficult second album phase affecting them unduly.

Yeasayer’s debut album All Hour Cymbals is out now through We Are Free.