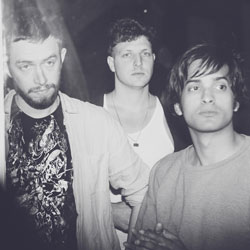 Yeasayer’s second album Odd Blood adds pop-flavoured production to their world music/indie sensibilities. Describing their music this time as “Enya with BOUNCE”, they definitely want to cause dancing to happen.

This is an album with all the beauty of pop – its sugar-rush surge, its call to your better/baser nature, its transcendental quality – added to the band’s darkly euphoric brand of cyber-gospel. There are little ’60s piano swirls, hooks that Daft Punk would kill for, and strange murky bells and whistles going on in the background. Thirty minutes, 10 songs, no filler. Some have called it a departure.

“That was one of the goals, to do a pop record that was influenced by lots of stuff like production techniques we like in dance records. But it wasn’t like all of a sudden we had some epiphany,” says frontman Chris Keating, sitting in the lobby of a west London hotel with the fabulously named bass player Ira Wolf Tuton. Yeasayer’s third member, Anand Wilder, isn’t here.

“We were just slowly building to a certain place and then we set ourselves goals to try to differentiate the way we worked from the first record. Some people really hear production techniques and they think, ‘Oh my God, this is an all-new thing!’ But we were trying out new equipment, we were working in a different way, and it all made sense. The songwriting is still similar.”

Just to put things in perspective, he says, “The first record was all recorded with one microphone, everything was recorded with one crappy microphone.” “It was a Chinese copy of a fancy microphone,” adds Ira. “We bought it off a weapons dealer in the West Village,” continues Chris, but he might be lying now.

Since 2008’s All Hour Cymbals, Yeasayer have had access to more elaborate… well, stuff. You can hear it in the ecstatic, everything-but-the-kitchen sink production. One song even includes field recordings of lions roaring. The newly discovered slickness of Odd Blood is partly what gives it its shiny, danceable feel.

“People seem really surprised, but I thought our first album was a pop record too,” says Chris. “Me too,” says Ira. “Then I realised the songs were too long. They’re actually really simple – people thought we were trying to be really intellectual. You can never control people’s perceptions.”

Despite being hyper-articulate, they don’t see themselves as a particularly cerebral band. They’d rather listeners danced than got lost in thought. An attempt to talk about their more complicated lyrics (the single Ambling Alp namedrops obscure figures from boxing history; this we know because of Google) veers into a conversation about Chris’s love of Ghostface Killah (“When I heard him saying ‘supercalifragilisticexpialidocious’ backwards, that’s when I knew he was a genius”) and Ira’s interest in Congolese music.

“Someone told me we sounded like Ace Of Bass mixed with Nickelback.”
– Yeasayer’s bemused Chris Keating

“My idea of African music in particular is that it kind of expands the realm of what the rhythm section can be,” says Ira. “That’s just kind of one influence, though – the production techniques are different, we’re not trying to sound like chimurenga music, we’re not trying to emulate that guitar sound.” “It’s like, you use synths and people say, ‘Oh, you’re 80s!’ But that’s just focusing too much on the technicalities of it,” adds Chris.

So what do they think of reviewers who have heard Depeche Mode influences in Odd Blood? “We don’t reject any influences. Someone told me we sounded like Ace Of Bass mixed with Nickelback, and I was like, OK, go for it,” says Chris.

“It would definitely have been a different album if McCain had won.”
– Yeasayer’s Ira Wolf Tuton on the politics of Odd Blood

If the last album, All Hour Cymbals, was full of Bush-era cynicism, perhaps Odd Blood is Yeasayer’s Obama album? “It would definitely have been a different album if McCain had won,” says Ira. “A much more aggressive album. We’re not an overtly political band, but we feel like we’re part of that system.”

Despite the album’s joyful feel, he reckons it’s more of a collection of “sinister love songs”. “It’s pretty honest in its darkness,” Ira reflects. “It’s not putting human love and emotions on this pedestal of unreality, it’s not idealising anything.” Chris sees the bright side: “But you hear the production really clearly and you’re like ‘Oh yeah I can dance to it!’ so that’s the positive part.”

“Probably the most positive-feeling song in terms of danceability and appealing production, the subject matter is really dark,” says Ira, referring to O.N.E., which has Chris crooning, “You don’t move me any more, and I’m glad that you don’t”, while Super Mario stars explode and little digital butterflies flutter their wings all around the vocal.

Yeasayer’s album Odd Blood is out through Mute on 8th February 2010. The band tour the UK in February, stopping at London’s Heaven on 23 February.