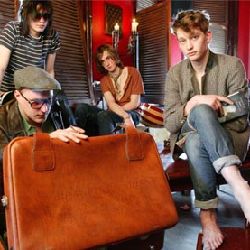 Already this year we’ve witnessed some quirky rock from South London in the form of Eel Pie Islanders Mystery Jets.

Now it’s the turn of another Twickenham based quartet, going by the name of Larrkin Love, to charm their way into the hearts of the record buying public with their own ramshackled arrangements.

The initial signs are certainly promising – their unique fusion of ska, reggae, calypso, folk and punk has seen them compared to the likes of The Pogues, The Clash and The Libertines, as well as build up quite a media buzz and a hugely loyal following.
Ahead of a packed summer schedule and their debut album, set for release in August, musicOMH decided to catch up with the four young scamps at London’s annual Camden Crawl festival, and before they go stratospheric.

As with all new, up and coming bands, it’s always interesting to discover where and how it all began, and what exactly inspired them to play music for a living.

Their articulate front man Edward Larrikin explains: “I wasn’t writing music, I was just writing words and stuff, and decided to put it to music – bumped into these guys through various pubs around where we used to live, and we just started jamming around together.”

“It was just really fun,” interjects their scruffy but amiable guitarist Micko Larkin. “I’d never worked with anyone who could write how Ed writes,” he continues. “I’d never come across a good guitarist really,” Ed responds. A match made in heaven, you might say…

The band then put out their debut single in September 2005, a double A-side of Six Queens/Little Boy Lost – something which led to the almost inevitable-for-any-up-and-coming-guitar-band comparisons to The Libertines. And as you might expect, they’re not totally enamoured by this.

“I’d never worked with anyone who could write how Ed writes…” – Guitarist Micko Larkin bigs up his band fronting mate.

“It’s very lazy journalism,” exclaims Micko. “We’re just so bored of it now”, adds Edward, sighing. “It’s starting to fizzle out slowly…it’s just so easy, I mean the fact that we don’t do…[mimics angular guitar noises]…y’know, Bloc Party beats, immediately you’re The Libertines. And if you do that, you’re Bloc Party, or The Futureheads.” he continues, showing an obvious disdain for the massive journalistic desire to pigeon hole.

It’s clearly not something that’s hindered them, however – a major label deal with Warner followed shortly after just their second single, something of a dream come true for any band striving for wider recognition, and precisely why they jumped at the offer. “I don’t think we gave it enough time for people to really start throwing bids at us, we were just so excited about the prospect of being able to release a record,” reveals Edward.

This record of which they speak, The Freedom Spark, is slated for release at the end of August, if all goes to plan. And judging by the band’s description of it, it’ll certainly be one to look out for.

“It’s got all kind of instruments on it. It’s got horns, fiddles, spoons…” enthuses Edward. “You name it, we’ve got it!” says Micko. “It’s really quite eclectic,” Edward adds, completing the sales pitch.

And if all that wasn’t enough, Edward reveals a number of special guest appearances: “The Rumble Strips did some stuff, Rob Skipper from The Holloways is doing the fiddle, Alex from Vincent Vincent and The Villains is doing cello, Patrick Wolf is playing the piano, Jamie T‘s singing on it…it’s a big mixture of all our friends.”

“The album’s kind of become a concept album about feeling stuck, remembering the kind of childhood innocence, and then using that to feel free…” – On their debut album, The Freedom Spark.

I move on to ask about what us listeners can expect from the record in lyrical terms, in light of Edward’s thoughtful words garnering comparisons to Morrissey, and the fact that the band cite writers like Rimbaud, Wilde and Orwell amongst their influences.

Says Edward: “The album’s kind of become a concept album about feeling stuck, remembering the kind of childhood innocence, and then using that to feel free.”

“That’s why it’s called The Freedom Spark, for people to have a package where they have this record and they can listen to it and it takes them to a different place. And it kind of kicks them up the arse a bit…to feel free, I guess,” he continues.

And what about those lyrics like “England has nothing more to offer me” and “Everything I adore came well before 1984,” lines that have no doubt raised a few eyebrows. Do they really feel this way about our sceptered isle?

Edward explains: “It’s not that I don’t think Britain has a culture, I think it’s got a huge amount of culture. It’s just there’s no real sense of identity, I don’t think. There’s no compassion here, there’s no love. There’s nothing really of its own here that really appeals to me, whereas in other countries you can really immerse yourself in their culture. I’m just not at my happiest here, and I’m much happier when I’m in a different country,” painting a damning, but possibly quite realistic, picture of the UK.

Happy or not, their livewire performances, full on energy, enthusiasm, cow bells and fiddles, have been putting smiles on the faces of many. And for the next few weeks, they’ll be opening for The Zutons, for what will surely be one of the hottest tickets in town.

“We’re really excited,” the band seem to utter unanimously. “They’re a good band,” offers Edward. I suggest that it’s quite an apt pairing, considering the headliners’ similar passion for energetic and eclectic sounds.

“There’s nothing really of its own here that really appeals to me, whereas in other countries you can really immerse yourself in their culture…” – Edward Larrikin paints a bleak picture of the UK.

“Yeah, definitely, because they’re not part of a scene, they’re not a scenester band,” Edward offers, citing what he sees as their biggest similarity. “People don’t go to their shows to be seen, people don’t dress up like The Zutons, they’re a real music band,” adds drummer Coz Kerrigan, again offering more possible grounds for comparison.

After this, they play the summer festivals (T In The Park, Oxegen as well as Reading and Leeds so far confirmed), and no doubt many shows of their own come the autumn and beyond. But as the free spirited, ramshackled and euphoric nature of their music hints at, there’s no grand plan.

“I think we just want to release a really good album, for people to enjoy it, and see what happens,” says Edward, when asked about what’s to come. And if they carry on like they’ve been going, chances are this will be just the start of it.