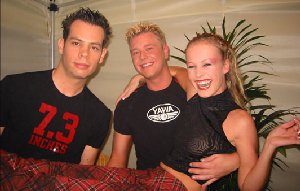 Lasgo’s debut single Something rocketed into the top 5 of the UK singles chart. The Belgian dance three-piece have arrived. Released on Positiva Records, the label that brought us Alice Deejay and Fragma, the single has been a huge hit across Europe. musicOMH caught up with Peter, Dave and Evy, for some Q&As…

musicOMH: Are you enjoying being famous all over Europe?
Peter: Of course we are! It’s always been a dream to be recognised for our music.

musicOMH: Which country has received you best?
Peter: Actually, the UK.

musicOMH: Together with Ian Van Dahl and Milk Inc you’ve put Belgium back on the musical map – what’s been the reaction in your own country to your international success?
Dave: People from Belgium don’t realise what it means to be successful outside of Belgium. It’s a very small country.

musicOMH: What was the inspiration for the lyrics to Something?
Lasgo: It’s nothing personal but it’s a story that happens to a lot of people.

musicOMH: What do you think of your fans – and who are they?
Peter: We are really thankful to our fans – without them we wouldn’t be here! Most are very polite and nice, although some ask odd questions.

musicOMH: Who are you listening to just now and who have been your major musical influences?
Evy: Nelly Furtado.
Dave: Depeche Mode.
Peter: U2 and Depeche Mode.

musicOMH: Which mix of Something is your personal favourite?
Peter: The WOSP remix and my own remix, which I don’t think is available in the UK.

musicOMH: Peter and David – how did you meet and how did Lasgo start?
Peter: I met Dave in a DJ shop & we just decided to work together.

musicOMH: Evi – how did you become involved with Lasgo?
Evy: Peter and I knew each other for about four years before. We were working on different projects. When they came up with Something, Peter called me and asked if I wanted to sing on it and that’s when the three of us became Lasgo.

musicOMH: Peter – are you a Gary Numan fan – even for his image?
Peter: I am – especially Cars and Are Friends Electric?

musicOMH: How do you go about composing a dance track?
Peter: We start with the lyrics, then work on the piano. It starts as a song then we put the beats in.

musicOMH: Whereabouts do you like to go clubbing (club, city)?
Dave: Antwerp in Belgium – The Biazzre.

musicOMH: How do you like to relax?
Dave: Just listening to or playing music.
Peter: I like to take diving lessons.
Evy: Horse riding.

musicOMH: Which electrical item would you be lost without?
Peter: Nokia Communicator.
Dave: my Dictaphone.

musicOMH: What would you all do if you weren’t in Lasgo?
Peter: I would be doing music…
Dave: Either DJ-ing or making music…
Evy: I would be studying to be a doctor.