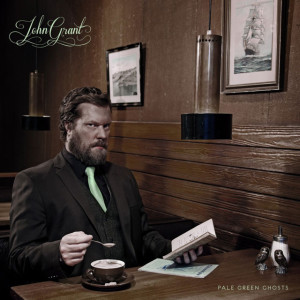 It’s fair to say that our album of the year came as something of a surprise. We loved John Grant‘s debut solo LP, Queen Of Denmark, and we – along with the rest of the world – were expecting another Midlake influenced record packed with troubadour sing-alongs. What we actually got was an entirely different beast.

On first listen, Pale Green Ghosts – produced by Biggi Viera of Gus Gus – is an invigorating album, with layers of fizzing electronica nestled alongside his booming, gravely voice, but it’s by no means an easy listen. Spend some time with him and Grant offers you an insight into a world packed tensely with heartbreak and tragedy. But what makes Grant different is that, despite its weighty subject matter, his music leaves you feeling uplifted; it laughs at the world in all its cruelty.

Pale Green Ghosts does everything that music should do; it makes you laugh, cry, dance and feel like songs were written with just you in mind. Add to this a string of stunning live shows and, John Grant, you’ve made our 2013.

What we said: “Neil Tennant of Pet Shop Boys famously once advanced the notion that artists experience an ‘Imperial Phase’ where everything goes right for them, both critically and commercially. On the strength of Pale Green Ghosts, John Grant should rightfully be entering his own. It’s a towering achievement, building on what has come before while expanding it in astonishing ways. This is undoubtedly one of the best albums of the year and after so many thwarted attempts, the world is finally Grant’s for the taking.” – Philip Matusavage