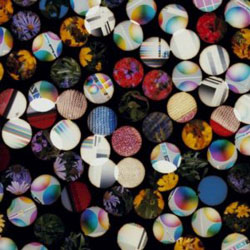 In a year heavily weighted with forward-thinking (if tightly-budgeted) electro, the always forward-thinking Kieran Hebden turned back the clock. But he didn’t use a turning back of the clock, per se, as the focal artifice for his album. There’s just so much more to There Is Love In You’s intoxicating alchemy than that.

Instead, Hebden’s fifth album as Four Tet is about as far from this generation’s fixation on chillwave, electro-pop and new rave as it is possible to get. While many of Hebden’s peers spent 2010 championing an electronica that has its roots in childhood immersion and a sound best described as hypnagogic emulsion, Hebden went about making old-fashioned dance music.

There Is Love In You’s influences – turn-of-the-century house and progressive house, Ibiza, iconic British nightclubs, and ecstasy – are as easy to glean from the music as they are from the album cover’s multi-coloured pill collage. But it is what Hebden does with these influences that separates this album from the nostalgic fog of its brethren. Unlike chillwave’s muddled and often uneasy yearning for youth, There Is Love In You is more clearly focused on celebrating the dancefloor highs and comedown lows of a post-adolescent past. And it does so with the kind of measured, textural brilliance that has been a consistent feature of Hebden’s music.

But unlike Four Tet’s previous work, which had a tendency to lose itself in its own intelligence, There Is Love In You has a far clearer modus operandi. From the snare-driven snap of Love Cry and the glitchy, bleep hypnosis of Sing to the soulful incantations of Angel Echoes and the melancholic bliss of She Just Likes To Fight, Hebden’s open and emotional love letter to happier times captures it all.

What we said: “This is effectively Hebden’s Balearic album, and few will be able to deny it as a thing of beauty. Even the most curmudgeonly critic will find it hard not to raise a smile or breathe a contented sigh, for this is a true antidote to January living as we know it.”