Well here’s a surprise. Camille, The Bug and Rokia Traor didn’t make the list, but this did? Well, well.

It won’t have hurt the globetrotting Swede that her compatriot Robyn guested at her Camden Crawl appearance back in April, but her burning ambition may yet see her supplant the blonde bombshell in the nation’s hearts.

What we said: “A lot of people are going to fall in love with this new young talent and her ambitious and creative debut.” – Ben Urdang 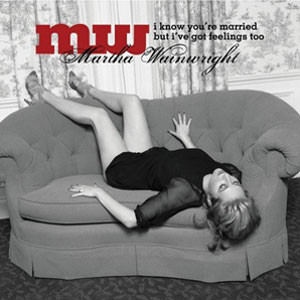 29: Martha Wainwright – I Know You’re Married But I’ve Got Feelings Too (Drowned in Sound)

No releases from Rufus this year, but younger sister Martha more than did the family proud with her second album.

This was more straight-ahead pop-rock than her folky debut, but as ever with Wainwright she added various degrees of shade which meant it was never easy listening. Her future is a remarkably bright one.

What we said: “She’s added a sure-footed commercial touch, without losing that angry edge which has always made her so compelling. Mischievous, poignant, desperately sad but with a rueful, optimistic glow.” – John Murphy

28: British Sea Power – Do You Like Rock Music? (Rough Trade)

“Easy! Easy! Easy!” – previously a chant only heard at wrestling matches and football games, but suddenly being bellowed at British Sea Power gigs.

The Isle of Wight eccentrics chose a more windswept rock sound for their third album, and it was a gamble that paid off – garnering some of the best reviews of their career and a Mercury nomination to boot.

What we said: “The sweep of the widescreen production means you can almost feel the wind and rain outside, and this adds to the mixture of melancholia and euphoria.” – Ben Hogwood

Being the progeny of a rock legend is no guarantee of quality – for every Rufus Wainwright there’s a Julian Lennon after all.

Richard & Linda Thompson’s son has been around for quite a while, but it was with this album he finally stepped out of his parents’ shadow with some beautifully crafted pop/folk – and that natty suit helped as well.

What we said: “Richly melodic and beautifully performed, A Piece Of What You Need deserves to be a big commercial hit.” – Nic Oliver

Guillemots weren’t the only seabird-inspired band to release a record this year.

The Okkervil River offshoot came of age with their fifth album. If there really is such a thing as pastoral post-rock, this was the year’s finest example.

What we said: “A hugely self-assured and often compelling album which looks outside of the world of modern man for inspiration and, in most cases, finds it in spades.” – Darren Harvey

Kevin Barnes may be the quintessential quirky indie rocker, but on Skeletal Lightning he was transformed into the funkiest diva this side of Prince.

Pop, rock, disco and a whole big dollop of funk were all mixed together for Of Montreal’s ninth album – as typically esoteric, psychedelic and eccentric as we’ve come to expect from them.

What we said: “Skeletal Lamping flicks across channels, but it excels in making a brilliant kind of sense. Kevin Barnes’ voice stands out clear throughout.” – Sam Shepherd

They may look like singing plumbers, but the spirit of early Springsteen is deep in Brooklyn’s The Hold Steady.

Often described as ‘the best bar band in America’, Craig Finn’s beautifully sketched characters were as finely honed as anything you’d find in a Kerouac novel. And did we mention they can rock?

What we said: “Drink the whole album in because intelligently constructed and musically thrilling records like this are a rare, rare find.” – Camilla Pia

Pip Brown came all the way from New Zealand with a Fleetwood Mac obsession to become the year’s most unlikely hip icon.

In a year in which the sounds of the ’80s seemed to be everywhere, Ladyhawke invoked the spirit of Stevie Nicks and Cyndi Lauper. Most impressively, she did so while sounding impeccably modern.

What we said: “Bam! Kazam! Ladyhawke! A superhero for the noughties, beamed direct to you from the ’80s. It’s a great record. Full stop.” – Tim Lee

So seemed to be the general consensus when Gruff Rhys teamed up with producer Boom Bip. Yet it became the Welshman’s most successful release yet. Danceable and intensely thoughtful, it also bagged a Mercury nomination for good measure.

What we said: “As a document of its time, Stainless Style is remarkably successful. Taken on the base level of being an enjoyable pop album, it also triumphs handsomely. An indulgence not to be passed over or taken guiltily.” – Ben Hogwood

The Beeb’s Planet Earth turned them into unlikely superstars; the Icelanders showed no signs of losing their touch.

A song sung in – shock, horror – English still couldn’t detract from their music’s otherworldly beauty. And they had the sense of humour to call one track Gobbledigook.